Eighty years ago next year, the Abbott and Costello film, Buck Privates hit theaters. It was a tense time in the United States because we knew we would be in the Second World War at some point, but we didn’t know when. President Roosevelt had just reinstated the draft, so men were shipped off to the Army in droves. Naturally, this new development was on everyone’s mind, and Hollywood decided to put life on the big screen. The result is a curiosity of a movie. Since it was made so early in the Second World War, America’s armed forces hadn’t yet adopted the look and the tactics we now associate with the war. Ergo, we see our guys in flat-brimmed Stetsons and spats, charging around with bayonets. It highlights how unprepared the United States really was when we started building up our military, and it was enough to convince certain people that we couldn’t win a war if we tried.

Also, on a side note, the title of this movie is a little dicey, because if it’s heard wrong it sounds dirty, if anyone gets my drift. Proper enunciation when talking about it is a real good thing. Just a little FYI.

Anyway, there’s a crowd at the local movie theater when the film opens, as it’s been commandeered to handle all the newly-minted draftees and enlistees. A tony limo parks illegally right in front, and out steps a miffed Randolph Parker III (Lee Bowman). He’s not digging the idea of being in the Army, and he’s even more put out that his chauffer, Bob (Alan Curtis) is gleeful about his own calling up. Bob has endured countless times of covering for Randolph, and he has no trouble tendering his resignation. Read: He gives Randolph a right hook.

Just across the street Slicker Smith (Bud Abbott) and Herbie Brown (Lou Costello) are hustling away, trying to sell ties to a gathered throng of men. A sharp-eyed cop, Michael Collins (Nat Pendleton) spots them, so Slicker and Herbie duck in the movie theater. 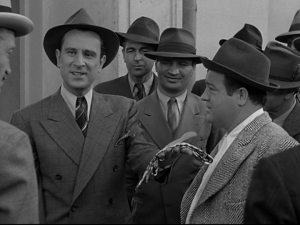 However, since they didn’t bother to read the room, the two of them are swept into the Army, with Herbie just barely making it. He’s a couple of ounces too heavy, but conveniently enough he just happens to be sitting on a radiator. Slicker secretly turns it up and Herbie sweats off the extra weight.

Neither one of them are too broken up about being in the Army, though, because there are charming camp hostesses going around checking on the men and giving them cigarettes or apples. Oh, and the Andrews Sisters are singing about how lucky everyone is to be American. 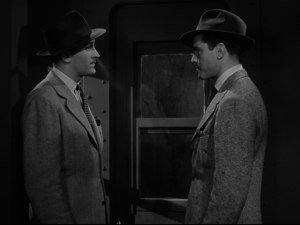 The camp hostesses go a long way towards changing Randolph’s mind about being in the Army. Never mind that he’s had a send-off fit for Don Juan, courtesy of a bevy of gorgeous women. However, when he sees Judy (Jane Frazee) he’s dead gone. Like the seasoned playboy he is, Randolph waylays Judy on the train and kisses her, and Judy slaps him. Much to his chagrin, Bob, who already knows Judy, defends her, and thus begins their rivalry for Judy’s affections.

And what of our two names above the title? Well, they’re keeping busy hustling a few hapless recruits in a drawing room, with Herbie acting as though he doesn’t know how to shoot craps. Slicker is more than happy to pretend to teach him, but Herbie is a little too good and makes off with the entire pot of cash. 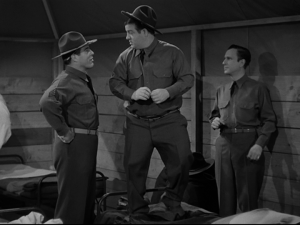 Once everyone is ensconced at camp, the real fun begins. Slicker and Herbie are horrified to find that Michael, the cop who tried to bust them before, is now their top sergeant. Naturally, he’s got it in for our two heroes, who run the gamut of boot camp stereotypes: KP duty, boxing matches, rifle drills, marching, and bleary-eyed wake-up calls.

Meanwhile, Randolph is determined to muster himself out of the Army. He also wants Judy to be his girl. Will he succeed? Well…no. His dad thinks he needs to give up his wild ways, so it’s heigh ho for the Army. Randolph resigns himself to his fate, and he just may surprise himself by doing well. If only he can get Judy to like him.

Everything is punctuated by plenty of schtick and a guest appearance by Shemp Howard, better known as Moe of the Three Stooges. I won’t say where he shows up, because the element of surprise makes it that much better.

We also can’t forget the Andrews Sisters, who perform several of their quintessential tunes in the film, such as “In Apple Blossom Time” and “Beat Me Daddy Eight To the Bar.” Then there’s this little Oscar-nominated gem, which will forever be one of the most famous songs of the Second World War:

The movie’s timeliness made it a massive hit with the public, with the critics somewhat reserved, like this one from the New York Times. According to TCM, Buck Privates had a budget of $200,000 because Universal didn’t think the film wouldn’t be as big a success as it was. They also thought the public wouldn’t take to former vaudevillians Abbott and Costello, so they accepted the duo’s request for $50,000 plus ten percent of the profits per movie made at the studio. It must have been a huge shock to the executives to see Buck Privates do well and Abbott and Costello to suddenly be huge stars.

Universal’s muckety-mucks weren’t the only folks who were in for a shock. Buck Privates may have been a comedy, but some took it seriously–the Japanese used the film to make their troops think Americans were a bunch of bumbling ninnies. History, of course, showed what nonsense this was; if anything, the Japanese only set themselves up for the biggest blindside in history.

Buck Privates wasn’t the last war-themed movie Abbott and Costello would make. Following Buck Privates, the duo made In the Navy and Keep ‘Em Flying, plus 1947’s sequel to Buck Privates: Buck Privates Come Home, a film some consider to be better than its predecessor.

Since it was basically a tryout movie, Buck Privates isn’t the strongest of the Abbott and Costello catalogue. Even though their names are above the title, the love triangle between Judy, Randolph, and Bob takes up a lot of space, giving it a slight feeling of bait-and-switch. Still, it’s a ton of fun, and a nice example of wartime morale-building in the time before America became a military giant.

Coming up in February:

If anyone is interested in participating, please see these lovely people:

And yes, I can’t help but shamelessly plug my two blogathons, the info for which can be found here and here.

Yep, next month is going to be busy, but it’s going to be a blast (As usual). Thanks for reading, all, and see you next week!

Buck Privates is available on DVD from Amazon.

2 thoughts on “You’re In the Army Now”