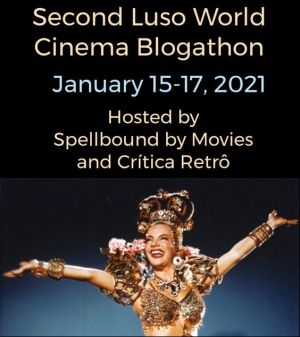 Taking Up Room’s first blogathon of 2021…

Carmen Miranda’s star rose very quickly in the United States, and it didn’t take long for Twentieth Century Fox to play that up in a big way. The most overt example of was 1943’s The Gang’s All Here. The film appears to be an homage to the Good Neighbor Policy, which basically meant that the United States wouldn’t intervene in the doings of Central and South American nations such as Cuba. In other words, the film was saying to these regions, “Hey, we’re all friends, right?” Was Miranda’s home country of Brazil convinced? Well…we’ll get to that.

The Club New Yorker is a hopping place. They’re hosting Phil Baker, whose current show is all about Brazil coming to America, where everyone is dancing the Uncle Samba. Among the throng are Andrew Mason, Sr. (Eugene Palette) and Peyton Potter (Edward Everett Horton), the latter of whom is as uncomfortable as a cat in a water park. Andrew is determined to loosed Peyton up, so he plies him with what he tells him is lemonade. Peyton famously can’t hold his liquor, and naturally he gets a little crazy. 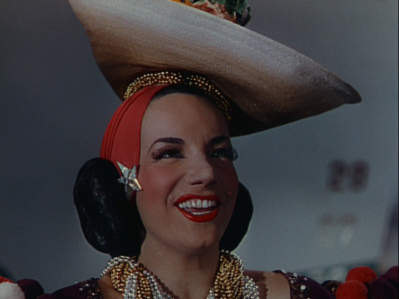 Andy Mason (James Ellison) is about to ship out with his Army company, and naturally he decides to take in the sights of New York’s nightlife. When he spies Edie (Alice Faye) he wants to meet her, but she’s a bit hard to catch because she divides her time between the Club New Yorker and a local canteen. Like the affable wolf that he is, Andy follows Edie to the canteen, where she politely dances with him and brings him coffee and donuts. For some reason Andy introduces himself as Casey and pretends to be just an average guy, which will become important later.

Not to be deterred, Andy follows Edie back to the Club New Yorker. He waits for her until her show is done, and they have a wild night riding the Staten Island ferry. After Edie’s rehearsal the next day, she and “Casey” have a tearful farewell at the train station. Before Edie can get too morose, though, her coworker Dorita (Carmen Miranda) comes back from the race track with Phil, and Dorita demonstrates the art of playing  the ponies, including tearing the betting slips into tiny little bits.

After distinguishing himself overseas, Andy comes back to a hero’s welcome, and to celebrate his son, Andrew Senior decides to book the Club New Yorker company to do a war bond show at his house. The timing is fortuitous, because Phil’s new show is pretty eye-popping, featuring not only Carmen Miranda and Benny Goodman, but Edie, who’s a rising young star.

Andy’s chickens are coming home to roost, though. Unbenownst to Edie, Andy isn’t Casey, and he’s engaged to Peyton’s daughter, Vivian (Shiela Ryan). When she finds Andy’s photo in Vivian’s room, Dorita makes a futile attempt to hide the evidence, but it’s only a temporary solution. Andy can’t pretend anymore when Vivian gives him a big hug at their reunion.

As always with Twentieth Century Fox musicals, though, things will never get especially downhearted. There’s a ton of great music and choreography, including the classic “No Love, No Nothing,” plus odes to Paducah, Kentucky, and the polka dot. The latter is quintessential Busby Berkeley and has to be seen to be believed. Put it this way: It’s not often one beholds Eugene Pallette bravely singing while his disembodied head floats towards the audience.

It’s also not often that one sees Carmen Miranda wearing a headdress that seems to go on forever. “The Lady With the Tutti-Frutti Hat” is Carmen Miranda on crack, acknowledging how much the American public liked her. It inspired some ire from the Hays Office, who thought the number was too Freudian. Berkeley had to be careful the dancers didn’t swing the bananas too close to their hips, if anyone gets my drift. 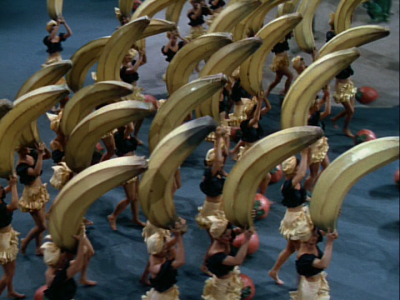 The Gang’s All Here feels like a sugar rush, not because it’s overly sweet but because of its energy. This movie is crazy from beginning to end. It’s got Alice Faye, who’s always a joy. There’s a lot of schtick from everyone, especially Carmen Miranda and Phil Baker. It’s got women waving giant bananas and grabbing giant rolling polka dots. It’s got Busby Berkeley doing his kaleidoscope thing. It’s a very bombastic if timely wartime film.

Gang was originally supposed to star Mary Martin in Alice Faye’s role, but she was unavailable. This was probably a good thing because according to Faye biographer Jane Lenz Elder, Faye’s solos are some of the most normal parts of the movie.

Although Gang got mixed to positive reviews from critics, they felt the story was weak and they’re right. The story is very weak and predictable, only serving to string together the many musical numbers. Still, the public ate it up and Carmen Miranda was a huge hit. Variety called Miranda “outstanding,” adding that “the way she kicks around the English lingo affords much of the film’s comedy.”

Despite its initial nod to the Good Neighbor Policy, the film wasn’t well-received by Brazilians, who thought Carmen Miranda was being used to mock them and mock bayan culture. “The Lady In the Tutti-Frutti Hat” must have left them absolutely agog. For that matter, Americans must have felt the same way. Women swinging giant bananas around can have that effect.

Carmen was disappointed that her homeland didn’t accept her Hollywood look. On a visit home to Brazil in 1940 she was able to make a joke about it, singing a new song, “They Say I Came Back Americanized.” The Brazilian public forgave her, but their response to her movies was always mixed. I can’t blame them–American films invariably presented Latin Americans as exotic, fiery, and possibly wild-eyed. Still, when Miranda passed away in 1955 it shook Brazil to the core.

The Gang’s All Here might be improbably crazy, it might not have much of a plot to speak of, but I love it. What it lacks in plot it makes up for in creativity, and Carmen Miranda is a delightful part of the cast. 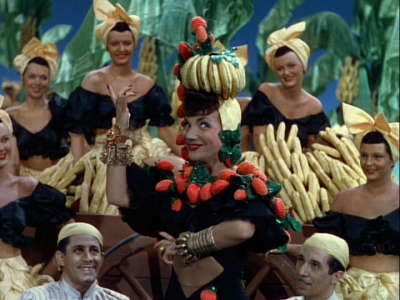 For more Luso culture, please see Le at Crítica Retrô and Beth Ann at Spellbound By Movies. Thanks for hosting, ladies–glad you brought this one back. Thanks for reading, all, and I hope to see you on Tuesday for a new Reading Rarity…

The Gang’s All Here is available on DVD from Amazon.

~Any purchases made via Amazon Links found on this site help support Taking Up Room at no extra cost to you.~

3 thoughts on “The Lady In the Tutti-Frutti Hat”

We're starting a new series on Taking Up Room, and I'm pretty excited about it. Click the link in my bio for the particulars. #blogsofinstagram #wwii
We're going back to the Hilton house today on Taking Up Room because, well, just because. Link in bio. #blogsofinstagram #classichollywood #sinceyouwentaway #claudettecolbert🌹 #shirleytemple #jenniferjones #robertwalker #montywoolley #hattiemcdaniel #josephcotten #davidoselznik
Our first Shamedown of the year, people, is 1997's "The Beautician and the Beast." I tried watching this thing in college and forgot all about it until my friend and fellow blogger tagged me to review it. Did I make it all the way through the second time? Click the link in my bio to see the answer. #blogsofinstagram #thebeauticianandthebeast #frandrescher #timothydalton #lisajakub #adamlavorgna #heatherdeloach #mikelerner