When Batman was on TV in the 60s, it seemed like every star in Hollywood lined up to take their turn at being a villain, and one of these was Van Johnson. Early in Season Two, he played the Minstrel, a devious lute player who sets his sights on the Gotham City Stock Exchange in two episodes entitled “The Minstrel’s Shakedown,” and “Barbecued Batman.” First broadcast on September 21st and 22nd of 1966, they present a villain that was both cunning and atypical.

The brokers are busy wringing their hands when the Minstral (Van Johnson) appears on their closed-circuit TV, telling them he’s in control. Each stockholder must pay the Minstral a thousand dollars a week, to be deposited in a Swiss bank account, or else he’ll shut the whole thing down.

At Police Headquarters, Commissioner Gordon (Neil Hamilton) and Chief O’Hara (Stafford Repp) have just seen the Minstral on TV, as he’s also breaking in on news broadcasts. So have Bruce Wayne (Adam West) and Dick Grayson (Burt Ward). They’re all creeped out by him and want to foil his plot. The only person who isn’t unnerved is Aunt Harriet (Madge Blake) who thinks the Minstral is very, very charming.

The villain in question is up in his hideout believing he’s got all the leverage. He’s a genius at electronics and logic, and plans every move like he’s a 4D chess player. The Minstral’s henchmen, Bass (Remo Pisani) and Treble (Norman Grabowski) stand in awe of his mental prowess, as does his moll, Octavia (Leslie Perkins). The Minstral is the only villain Batman finds frustrating, but he hasn’t given up yet. 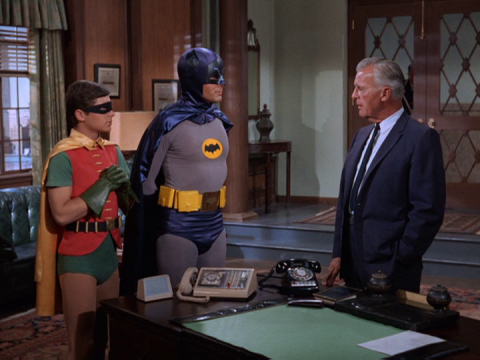 The first thing to do is find this rascal, and Batman and Robin figure out very quickly that the Minstral has tapped the transmission box at the TV station. So they decide to tap the Minstral right back. It takes long hours, not to mention a dinner tray from Alfred (Alan Napier), but at last they have a suitable tracking device ready to go.

While the Dynamic Duo find the Minstral’s hideout, they don’t find him because he anticipated they would try to trace his location. Instead, Batman and Robin get caught and tied to a spit, where they’re presumably supposed to roast to death.

The one member of the Minstral’s gang left behind after the others vamoose is Octavia, who seems fully prepared to give herself up. Batman doesn’t think so; at least, that’s what he says to her, but what Octavia doesn’t know at first is that Batman has bugged her purse. The Minstral is so incensed when he discovers it that he promises to put Plan High C in motion.

The Minstral doesn’t reckon on Batman, of course, who’s got a plan.

These two episodes were the only time Johnson appeared on the series, and he was actually one of the more low-key villains. The Minstral doesn’t even take part in the usual Batfight because he abhors violence. He just sneaks out a side door, leaving explosives in his wake, and no evil laughs for the smooth-as-cream Minstral, either. That’s just not how he rolls.

Another difference is the relative lack of over-the-top humor. Normally, the camp factor on Batman got sky-high, especially as the series went on (The “Marsha, Queen of Diamonds” episodes are particular shark-jumpers.). It would have been more in keeping for the Minstral to tie Batman and Robin to a giant lute and do a musical version of Chinese water torture or something. But no, he’s too cold and calculating for that. Roasting Batman and Robin on a spit is enough of a cliffhanger. 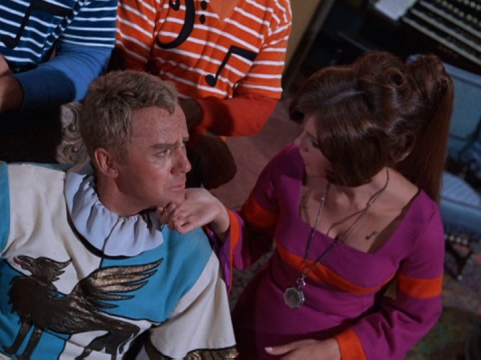 It’s hard to say whether or not Van Johnson enjoyed himself while making these episodes. He was at a point in his career when he was depressed at the current state of Hollywood and entertainment. According to Johnson biographer Ronald Davis, Johnson spent time in Germany watching circus performers and reminiscing about the golden days of vaudeville. He would soon return to the stage, where he found a new niche.

Still, Johnson seemed to have a twinkle in his eye all the way through Batman. He got to play the lute and sing Gilbert and Sullivan’s “Wandering Minstral,” not to mention snarl and growl and smirk, sometimes while swirling colored smoke. It must have been fun for him at least a little bit. Even if it wasn’t, Johnson’s turn as the Minstral is quietly, musically pleasant.

For more of the great Van Johnson, please see Michaela at Love Letters To Old Hollywood. Thanks for hosting this, Michaela–it’s always nice to see Van Johnson again!

On Thursday we’ll have a kind of post we haven’t had all year due to these unprecedented times. Is anyone else sick of that phrase? I am. Anyway, hope to see you on Thursday. Thanks for reading and have a good one…