It’s time for our closeups, people…our closeups of some of the worst movies ever made, and we’ve got some doozies coming over the next three days, courtesy of my lovely bloggers, some of whom have gotten their posts in early (Thanks, all!). As usual, I will be updating the post throughout the day, so feel free to send me your entries anytime. Ah, I can already see noses wrinkling across the blogosphere.

Sally from 18 Cinema Lane kicks things off with her take on the 2011 Hallmark film, The Cabin, starring Lea Thompson and…a guy in a kilt.

Quiggy from The Midnite Drive-In has this fun discourse on Stone Face…er, Sylvester Stallone in Rambo: First Blood Part II. What is it with so many sequels being stinkers?

Rich from Wide Screen World brings us this review of the 2014 film, Left Behind. It’s one thing to remake a bad film, but when the redo is even worse, well… 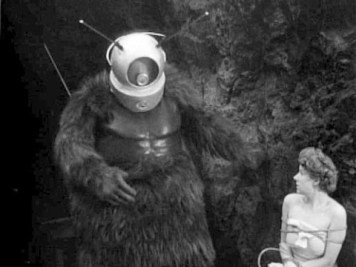 Ruth from Silver Screenings brings us the 1953 monstrosity, Robot Monster, about an alien robot thingie that wants to wipe out humanity. And yes, the robot has fur.

Le from Crítica Retrô shows us the futuristic world of 1980 in the 1930s musical headscratcher, Just Imagine.

Here’s my review of 1984’s not-so-super Supergirl, in which our heroine goes toe to toe with Mommie Dearest.

Keep ’em coming, everyone! Thanks for stopping by, and hope to see you tomorrow for Day Two…

8 thoughts on “The Second So Bad It’s Good Blogathon Has Arrived!”

Taking Up Room is hitting the beach today with a review of 2002's "Blue Crush." Ever seen this movie? Link in bio. #blogsofinstagram #bluecrush #katebosworth #michellerodriguez #matthewdavis #mikaboorem #faizonlove #hawaii🌴 #surfibg
Smile, son--it's only your eighth grade graduation. 😀 #youdidit🎓 #yayyou #highschoolfreshman
It's the last day of the Fourth Broadway Bound Blogathon, and my third and final post is about 2008's "Doubt." The play version of this film won a Pulitzer Prize and a Tony Award for drama and is hard to look away from. Link in bio. #blogsofinstagram #doubt #merylstreep #philipseymourhoffman #amyadams #violadavis #johnpatrickshanley