And we must wipe out completely for the duration of the war the idea of business as usual.

This one sentence sums up the mission of the Office of War Information, or OWI, which was established on June 13, 1942. It’s putting it mildly that there were truckloads of dispatches and loads of information about the war coming out of the federal government and OWI’s job was to consolidate that information and decide what was important for the public to see. While the OWI was pretty active in Hollywood dealings, its subdivision, the Bureau of Motion Pictures had the more direct line.

What the OWI did may seem like censorship on the surface, but it really wasn’t. The tricky thing about the Second World War is that since the war was so widespread and we knew certain people weren’t exactly above the board (looking at you, German American Bund), the average American had to be very careful about what they said in public. Even just a casual mention in the corner diner of where Private So-and-so was headed to could potentially be overheard by the wrong ears and put troop movements in danger. Servicepeople had to stay sober so they didn’t get too chatty. War workers helping build and transport sensitive equipment and parts had to be especially careful because there were always fears of sabotage.

Daily life could be a minefield, and the OWI was there to keep things safe. Safer, anyway.

Despite presenting themes of rugged hard work and nobility, Hollywood studios at the time largely avoided message movies, even religious ones, because it was thought that message movies couldn’t succeed at the box office. The OWI wanted the messages to come thick and hard.

Some film studios were more receptive than others. Warner Bros. was good with it because they rolled that way anyway, but MGM preferred what was called “pure entertainment.” Disney was a gung-ho participant, producing such patriotic content as the 1942 short, “The New Spirit”:

Overall, Hollywood’s objective was to never let the public quite forget that they were at war. If a film wasn’t blatantly about the fighting, there had to be some reference to the war, such as setting a story on the home front, where average Americans are carrying on while waiting for news. Or maybe a character could mention rationing or the draft or some other aspect of daily life during wartime.

One such movie, and one of Louis B. Mayer’s favorites, was 1943’s The Human Comedy, which starred Mickey Rooney as Homer Macauley, a telegram delivery boy in Ithaca, California, who, after delivering fateful messages to blue star families around town, has to mature in his own way when facing the possibility of his brother, Marcus’s death.

There were also films that made light of housing shortages and gangplank marriages, such as The Doughboys and The More the Merrier, both of which were stories about what happened when seemingly disparate characters are forced to share very tight quarters. The latter features the characters stumbling on each other after a few close calls, while the former goes for more of a straight ahead, Grand Central Station approach. These kinds of movies get crazy and exhausting, but also nicely diverting.

Some movies got very subtle, like Alfred Hitchcock’s 1943 film, Shadow Of A Doubt and MGM’s Slightly Dangerous, also from 1943, which both had soldiers walking down city sidewalks but no other mention of the war. These were often exceptions to the rule, though, as many movies, even period pieces, at least had a war bond pitch at the end. 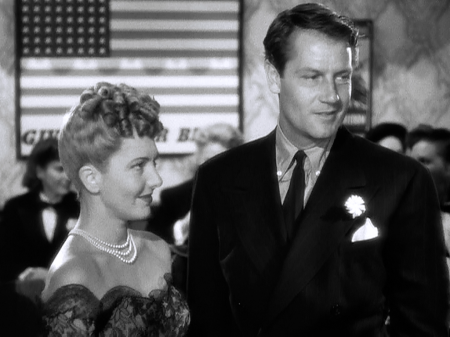 Obviously, this carried over to radio as well. Hollywood collaborated with the OWI on specially-made propaganda, such as the government-sponsered Norman Corwin show, This Is War!, a star-studded series that featured deliberately vague information about new aircraft and other machines so as to throw off any spies who might be listening. The series is well-worth a listen, although it’s a little more terse and direct than Corwin’s usual tone. Unfortunately, only half a dozen episodes appear to have survived.

Corwin’s shows weren’t the only one dealing with the war effort. Arch Oboler also got in on it with radio plays such as “Johnny Quinn, USN,” about a very unsympathetic fellow who somehow wins the heart of his ladylove, but who has to join the Navy and experience the attack on Pearl Harbor to finally get his head on straight. I won’t ruin it because it builds and resolves very effectively.

Fibber McGee and Molly is widely considered by radio buffs to be one of the most ardently supportive of the war effort. In one episode entitled “Scrap Drive,” which was broadcast on April 7, 1942, McGee and Molly tackle that most infamous of the show’s running gags, the hall closet. In later episodes they took in a boarder, Alice, who had a job at the local war plant. The show had the distinction of being the only one to be asked by the OWI to put out a call for new merchant seamen, and according to the Fibber McGee and Molly website, volunteer numbers doubled as a result.

The OWI’s presence sometimes meant that the Production Code was turned on its head. War was portrayed as good and the current war was justified, which, of course, it was. Language standards were relaxed slightly, such as in Air Force, which features brief mild profanity, and it was fine to portray the Japanese as sinister and slimy even though the Breen Office normally mandated fair representation of cultures. Not Japanese Americans so much, but Japanese. Meanwhile, Americans in service were largely shown as decent, causing no more mischief than an errant kid in school. 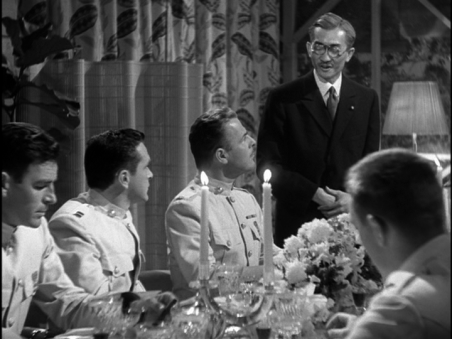 The obvious question is, what happened if someone said no to the OWI?

Simply put: Screws were turned. A production might be pulled, or fines levied. Either way, changes were made.

By 1945, the OWI was somewhat diminished as an organization. Not only were Americans weary of hearing about the war everywhere they went, but the OWI was accused of being too biased and absorbed into the Department of the State in August of that year, then later into the United States Information Agency. It existed in some form until 1999, when the Agency was dissolved.

Propaganda gets a bad rap, and a lot of it is deserved, but it does have its purposes, and for a while, the OWI served to remind Americans that their words mattered more than ever during a world war.

Another post is coming up on Friday. Thanks for reading, all…

Shadow Of A Doubt (DVD and Blu-ray), Slightly Dangerous (DVD), The Human Comedy (DVD), and The More the Merrier (DVD) are available to own from Amazon.

If you’re enjoying what you see on Taking Up Room, please look for additional content on Substack, where you’ll find both free and subscriber-only articles. I publish every Wednesday and Saturday.