For my third and last post of this blogathon, I’ll be looking at the 2008 film, Doubt, which was based on the Tony and Pulitzer-winning play of the same name. The only things I knew about it before I watched it was that it stars Meryl Streep, Philip Seymour Hoffman, and Amy Adams, and a lot of critics gave it favorable reviews. Other than that, to paraphrase the evergreen Sergeant Schultz, I knew nothink.

So yeah, that’s all different now. Gonna dive right in without further ado.

The film is set in 1964 at St. Nicholas Elementary School in the Bronx, where parish life is very integral to the community. Father Flynn (Philip Seymour Hoffman) is a well-liked pastor at both the church and the school, joking with the kids and listening to their troubles. Watching from on high, sometimes literally, is the principal, Sister Aloysius (Meryl Streep) of the Sisters of Charity, who’s a martinet for discipline. She patrols the classrooms at random and sometimes looks like she’s been sucking lemons.

Yet Sister Aloysius isn’t a bad-hearted person. She’s actually very conscientious and concerned about her students and the teachers on the staff. She takes care of the elderly nuns in her order like a younger sister, and they all depend on her. She even argues to keep a certain nun on staff even though this nun is going blind and can’t really do her job anymore. 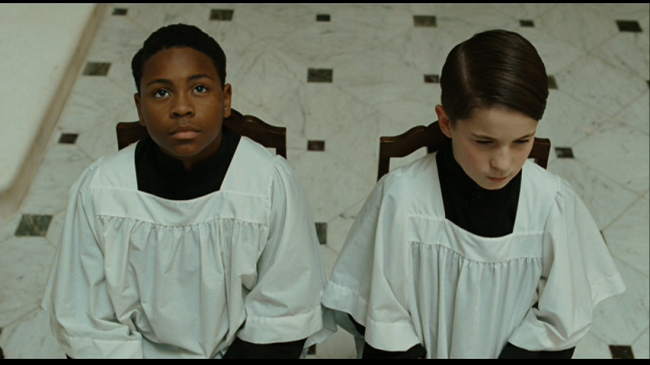 When St. Nicholas admits a black boy, Donald Miller (Joseph Foster) to their eighth grade class, there are concerns that he won’t fit in. He’s a good kid who serves as an altar boy with ambitions of becoming a priest. Donald’s teacher, Sister James (Amy Adams) notices that Father Flynn has seemed to take a special interest in the boy, offering him his protection.

It all seems innocent at first, but then Sister James notices Father Flynn sticking an undershirt into Donald’s locker during P.E. class. She also notices Donald putting his head on his desk after being summoned to the refectory to meet with Father Flynn. What’s more, Sister James smells alcohol on the boy’s breath.

Sister James tells Sister Aloysius about what she’s noticed. There seems to be enough to it that Sister Aloysius calls a meeting with Sister James and Father Flynn on the pretext of talking about the upcoming Christimas pageant. After chitchat over tea about whether or not to include “Frosty the Snowman” in the program, the sisters awkwardly transition into voicing their concerns about Donald.

Father Flynn defends his actions, which satisfies Sister James but not Sister Aloysius, who starts sniffing around. She doesn’t have any real evidence that anything is amiss, but she feels very strongly that Father Flynn is not only behaving improperly with the boy, but possibly abusing him. She’s not sure about Father Flynn anyway, whose methods she’s dubious about, such as the length of his nails and use of a ballpoint pen. Sister James is caught in the middle. 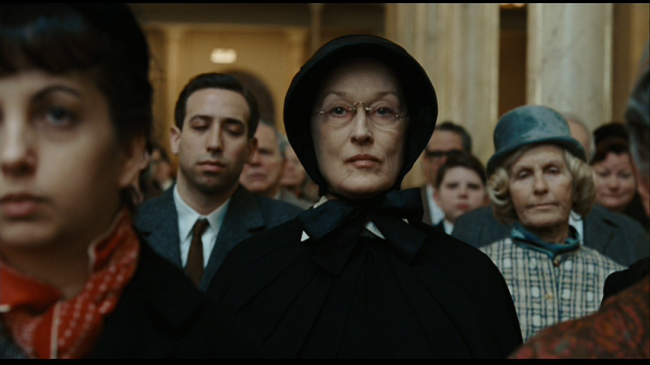 Sister Aloysius starts calling around, not only to Father Flynn’s previous parish, but she has a meeting with Donald’s mother (Viola Davis), and to her dismay, not everyone views the situation the way she does. Mrs. Miller, for instance, is just glad her son is getting positive male attention for once. She gets evasive when asked about her home life, but she does say Donald’s dad beats him. Mrs. Miller doesn’t care about what Father Flynn might or might not be doing; whatever it is, Donald just has to stick things out until graduation. Then he can move on to high school and have a chance to go to college.

All of this leads up to a big showdown with both Sister Aloysius and Father Flynn defending their respective methods and nothing resolving, at least not what we can see.

The play is personal to its director and screenwriter, John Patrick Shanley, without being personal. The story itself is fiction, but Shanley based the character of Sister James on one of his own teachers, who really was Sister James until after Vatican Two when her order restructured itself. Now known by her baptismal name of Margaret McEntee, the Sister served as a technical advisor on the film.

Doubt’s power lies in its ambiguity. Shanley’s original play had a cast of only four actors, and the action, or lack of, centers around Father Flynn, Sister Aloysius, Sister James, and Mrs. Miller laying all their concerns and insecurities bare. 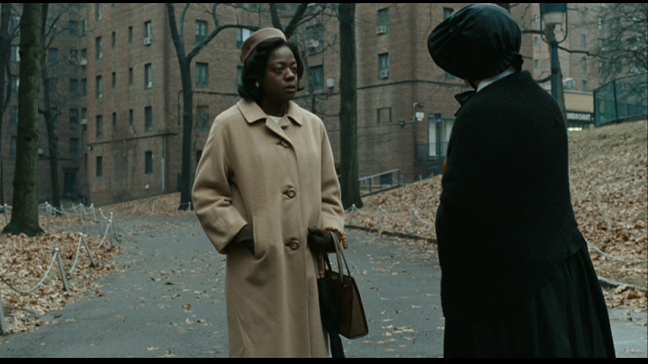 For the film, of course, Shanley took his play outside, filming on the Bronx street where he grew up, with his old school building standing in as St. Nicholas. A lot of characters and little side plots were added, such as Sister Aloysius confiscating a transistor pocket radio from a student before being caught with her own later. This filling-out cuts down on the immediacy of the film’s questions and distances it from possible resolution, but it’s still pretty intense.

Since no questions are answered and nothing is spelled out, we don’t know what is real and what isn’t. Mirrors, mirror images, and Dutch angles are a constant motif throughout the film, as if the characters are not willing to address problems head-on. 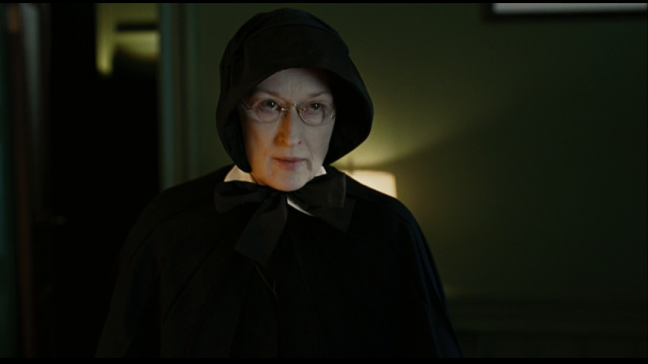 The film and play’s dearth of exposition means that everyone who sees them has a different take. What struck me was how differently we handle education nowadays. I’ve worked in children’s ministry and child care since 1994, and I’ve had the great blessing of being taught from the beginning why accountability is important. There’s always a possiblity that people will misread a situation even if their suppositions are baseless. Or they might miss what’s right under their noses. That’s why it’s best to have as many adult eyes on a scene as possible.

Ergo, I will not work in any child care program with too few adults. I’ve heard horror stories about Sunday school teachers who are left alone with thirty students and a surveillance camera looking over them. I’m sorry, but that’s asking for trouble, not just from an accountability standpoint, but safety, which is whole other matter. 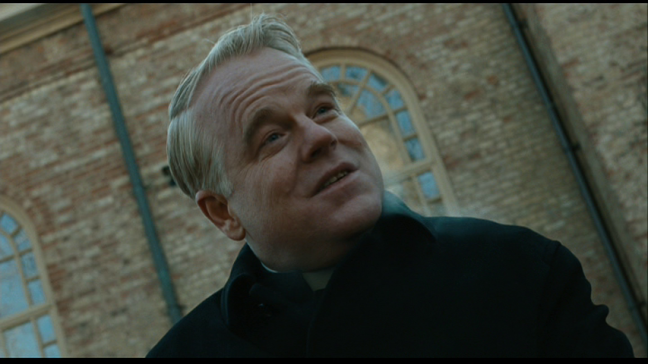 That’s why I feel for both Sister Aloysius and Father Flynn regardless of what the real story was: The system as it existed back then didn’t protect anyone, kids or adults. It’s not just that children were left vulnerable, either. There’s no question that lives were probably ruined unnecessarily over unsubstantiated rumors or complacency, or maybe just plain old vendettas. Human nature can be an ugly thing.

That’s why Doubt can be really hard to watch and yet hard not to watch. The acting is compelling all the way though, especially from Shanley’s original four characters. It may leave viewers with questions, but it will also get them thinking and talking, and that’s not bad at all. 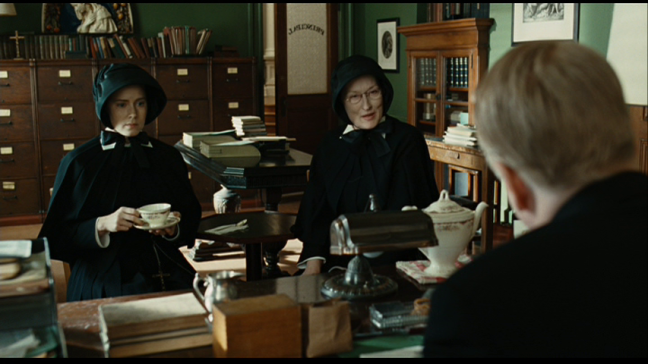 For more of our Day Three posts, please click here. Thanks for reading, all…

Doubt is available on DVD and Blu-ray from Amazon.

3 thoughts on “The Wind Has Changed”

Taking Up Room is going back to the opera with my new review of 1943's "Phantom of the Opera," starring Claude Rains, Susanna Foster and Nelson Eddy. Ever seen this movie? Link in bio. #blogsofinstagram #classichollywood #phantomoftheopera #clauderains #nelsoneddy #susannafoster
A little ice cream before we head home. For some reason my guys didn't want me taking their pictures. Oh well. 😀
Flies, Dan'l. Flies. 📚 #marktwainmemorial