One of the first Agatha Christie films I ever saw was 1945’s And Then There Were None. It’s got an all-star cast and an effective bait-and-switch structure that I would hate to spoil, so it’s probably best to just dive right in without much of a build-up. Here we go…

The movie opens with a group of eight people on a sailboat headed out to an island estate, casting sidelong glances at each other while their various effects blowing around the boat with the wind. None of them have ever met before, and all have been invited by a certain Mr. and Mrs. U.N. Owen. The water is choppy and some of them aren’t used to sailing. At the rudder is a cheerful sailor eating a sandwich.

Right off the bat, we know the characters are types. Francis Quincannon (Barry Fitzgerald) is a judge. Henry Blore (Roland Young) is a detective. Emily Brent (Judith Anderson) is a socialite who likes to knit. Sir John Mandrake (C. Aubrey Smith) is a general. Edward Armstrong (Walter Huston) is a doctor. Philip Lombard (Louis Hayward) is a journalist. Nikita Starloff (Mischa Auer) is a Russian prince. Vera Claythorne (June Duprez), who was hired sight unseen by the Owens as Mrs. Owen’s personal secretary. Last but not least, the servants are Thomas and Ethel Rodgers (Richard Hayden and Queenie Leonard). 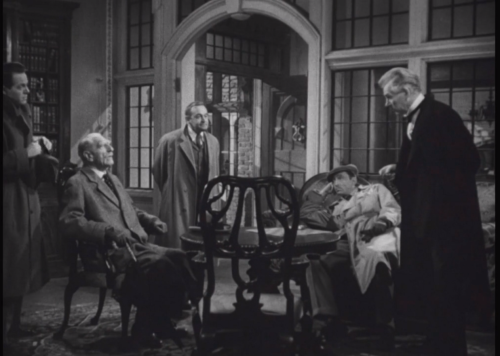 The only people missing from this congenial little gathering are Mr. and Mrs. Owen. No one knows who they are or what they look like; just that they’ve been delayed. Thomas and Ethel have never seen them before, and neither has Vera. There’s nothing for the group to do but sit down to a nice rack of lamb and potatoes while they wait for their hosts.

In the center of the table is a centerpiece of ten little ceramic Indian boys. The piano rack sports the sheet music of “Ten Little Indians.” It doesn’t take long for either of these things to become things. After dinner the group is sitting around shooting the breeze and Prince Nikita starts noodling around on the piano, idly playing through the “Indians” song. Just as the group remarks on how coincidental it is that the song is on the piano, a record comes on from the mysterious Mr. Owen accusing the characters of various crimes. Soon after that, the first victim dies. And one of the Indian figures gets broken off at the knees. 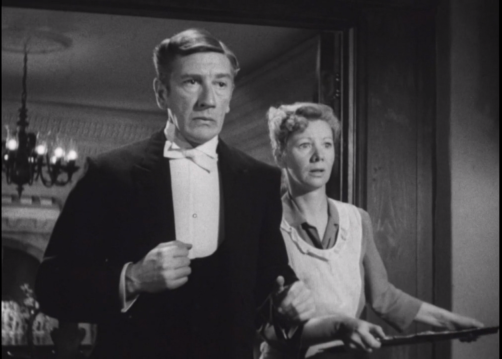 That’s how And Then There Were None rolls. Every time someone dies another figure gets broken off, more or less in line with the lyrics of “Ten Little Indians,” (hear the song here) and just because someone seems dead doesn’t mean they really are.

And what of the mysterious U.N. Owen? He remains mysterious, but he might be closer than he appears.

And Then There Were None was Agatha Christie’s breakthrough novel, and according to her estate’s website, it’s the highest-selling mystery novel of all time. Its unfortunate original title was Ten Little N*****s, but this was soon changed to the only slightly better Ten Little Indians before landing on the safest option, And Then There Were None. No, I’m not going to write the full original title, but you all can probably guess what the asterisks stand for.

So yeah, if anyone is getting Clue or Murder By Death vibes that’s completely natural. In fact, Murder By Death is a straight-up parody of Christie’s story. A group of strangers in a mysterious manor house, with or without the dark and stormy night, and one by one they die, leaving the remaining guests to ferret out the mystery. It was a common trope both before and after Christie’s novel and this film came about, but Christie’s work was a critical mass point.

Well, there’s one tiny difference between None and its counterparts: At least it’s implied that these characters get to eat full meals before someone gets murdered, as opposed to a few odd spoonfuls of consommé sneaked in until the ominous sounds start. Hunger is the least of their worries anyway, but at least no one’s knocking back alcohol on an empty stomach.

But I digress, of course. Moving on to the big stuff…

The acting in the film is terrific, and it’s no shock, seeing as the cast is made up of great character actors. Film buffs who haven’t experienced And Then There Were None will find wall-to-wall familiar faces, which is always cool. Director Rene Clair keeps his direction simple and the atmosphere light, allowing the story to breathe.

As much as I like this movie, I wish the characters had been more than types. We’ve got the doctor. The general. The judge. The secretary. The socialite. The journalist. And so on. There’s no reason for these characters to be called together by the elusive Mr. Owen except that they all have sordid pasts that don’t come out until much later. The novel gives us this (read an excerpt here), but the movie is a lot more spare. It’s forgivable, though, because it doesn’t really have the time, anyway. And there’s a wee bit of fourth wall-breaking as well, which makes things more personal.

Where the movie succeeds is the characters wondering who’s going to get murdered next and how they react to each death. They go from horror to asking questions to looking for the murderer to suspecting each other, and it’s all played like a farce. Since they don’t know who the murderer is, they have no choice but to roll with the punches. There seems to be no way out until there is and it feels like a big ol’ troll, as if Porky Pig pops up and says, “That’s all, folks!”

And Then There Were None has been adapted in various ways since the 1945 film. It’s not as sprawling or epic as, say, Murder On the Orient Express, but it’s simple dark house fun, and that’s never a bad thing.

For more mystery characters, please see Tiffany and Rebekah at Pure Entertainment Preservation Society. Thanks for hosting, ladies–it’s a pleasure as always! Thanks for reading, all, and I hope to see you tomorrow because I’ll be participating in a surprise blogathon…

And Then There Were None is available on DVD and to stream with ads from Amazon.

8 thoughts on “And Then There Was Agatha Christie”