Who else misses Brittany Murphy? I do. She was a fun lady who left us way too soon. I always enjoyed seeing what kinds of parts she chose to play, and I think one of the nicest is 2003’s Uptown Girls.

Molly Gunn (Brittany Murphy) lives like a princess. Her Manhattan apartment looks like Rapunzel’s tower except that she’s not a prisoner waiting for a handsome prince. Her dad was a famous rock star who, along with Molly’s mom, was killed in a plane crash when Molly was nine, and Molly’s been living off her ample trust fund ever since. For all intents and purposes she’s raised herself, with some guy named Bob paying her bills.

When the movie opens, it’s Molly’s birthday, and she rushes out to a club to meet her perfect best friend, Stepford lady-in-waiting Ingrid (Marley Shelton) and her other, less-than-perfect-but-still-goodhearted best friend, talent scout Huey (Donald Faison). Apart from some of Ing’s catty friends telling Molly she might want to Botox her worry wrinkle and Molly stressing about looking like the Cryptkeeper, it’s as normal as a wild night of clubbing can be.

Well, not quite. Huey and Ing booked up-and-coming singer-songwriter Neal (Jesse Spencer) as the evening’s entertainment and Molly’s entranced. She wants Neal something bad. For that matter, so does Roma (Heather Locklear), a ritzy record exec who’s come to the club to take in Huey’s new find. It just so happens she’s brought her nine-year old daughter, Rae (Dakota Fanning). More on her later.

Long story short, Molly leaves with Neal and Rae leaves with her dainty middle finger sticking out of a towncar window. Then after a whirlwind three days of she and Neal eating Pez and engaging in various adult activities, Molly wakes up alone wearing Neal’s jacket, only to find Ingrid standing over her snapping her fingers. Molly’s power is shut off and and Bob has absconded with Molly’s one-hundred million dollar fortune, leaving her high and dry. She comes home one day to find she’s been evicted, with her pet pig, Moo, sitting in the hallway.

Naturally, Molly has to get a job, and Ingrid tries to put a good word in for her at Henry Bendel, but Molly doesn’t quite get the concept of living within her means. She doesn’t quite get the concept of Ing’s perfectly ordered life, either, because everything she touches gets ruined somehow. Ingrid gives Molly a batch of cookies to bake and Molly sets the kitchen on fire, putting it out with Neal’s jacket.

Good friend that he is, Huey gets Molly a gig as Rae’s nanny. Yeah, the charming birdie-flipper from the club. Rae is extremely precocious and fastidious to the point of hypochondria and paranoia. She brings her own soap everywhere she goes. She wipes down her own Evian bottles with all the precision of a brain surgeon. She won’t eat anything but organics and tofu. She skips out of ballet class early because she doesn’t want to dance freestyle. And she’s got a smart mouth.

Mother Roma, whose husband is dying of a massive stroke, is busy most nights schmoozing with the likes of Mark McGrath and Dave Navarro. She’s desperate because she can’t keep a nanny, and like an absentee parent often is, doesn’t have a clue as to how to relate to her daughter.

Molly doesn’t take Rae’s foibles very seriously at first, but before long she figures out that Rae’s tough exterior hides a scared, confused, lonely little girl whose mother is absent, whose father is dying, and who’s forgotten how to have fun. It just might take a trip to Nathan’s and Coney Island to coax Rae out of her shell, and a new pig roommate named Moo wouldn’t hurt, either.

Uptown Girls looks like a fairy tale. The colors of the movie are softly but strongly saturated and clean, even the dingier environments with graffiti on the walls. Molly’s apartment is deep pink and sparkly, with lots of floaty fabrics and wrought iron. All the women in this movie wear dresses, although Rae does sport capris and shorts in a couple of the scenes, which gives the film a timeless, very feminine look. It’s kinda funny to see Molly go to Coney Island in four-inch heels and a handkerchief skirt, but it’s also cool. 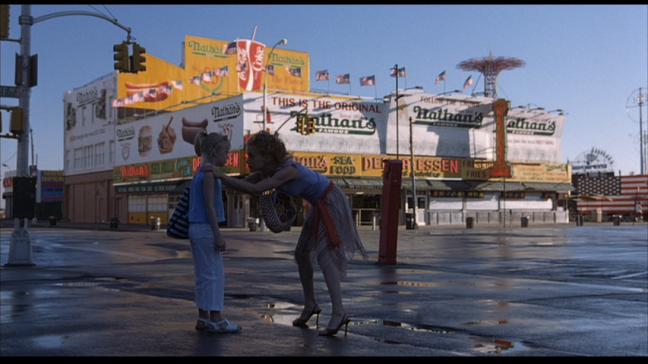 There are also a lot of beautifully composed shots in this film, especially between Molly and Rae. These characters are given plenty of time to show each other what they’re thinking, and two gifted actresses like Brittany Murphy and Dakota Fanning really know how to make the most of that space. Oftentimes character development comes across in postures and positions instead of a lot of dialogue. When Rae and Molly are angry at each other, for instance, their separation is usually communicated by the characters turning their backs on each other and not showing their faces. It’s subtle but it says a lot.

As much as I like Uptown Girls, its biggest issue is pacing. Most movies take about ten to twelve minutes to set the scene and establish a story’s trajectory, depending on the length of the credits. It takes Uptown Girls twenty-four minutes and twenty seconds to get from the opener to Molly presenting herself as Rae’s nanny. 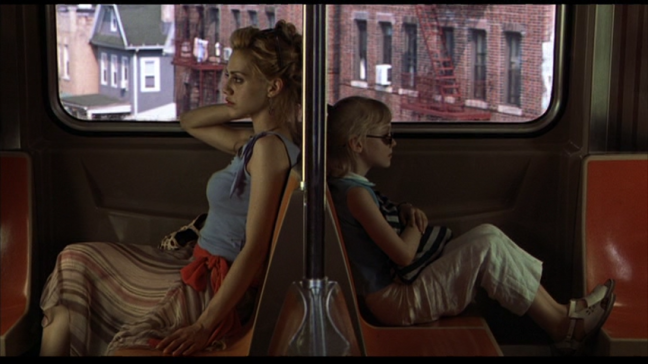 Yeah. Twenty-four minutes and twenty seconds. I don’t know if they were trying to pad this thing out or what, but come on. The plot summary you all just read is mostly from the first third of the film.

We all know that movie minutes can be like dog years because it’s possible for hours, days, and months to pass by in a very short amount of time, and in the case of Uptown Girls, extending Rae’s narration at the beginning of the movie would have been a better approach. Show Molly wafting around her princess-y apartment, seducing Neal, and so on, right up to the point when he leaves and Molly’s splayed out on the couch.

Things can come back to reality when Ing snaps her fingers in Molly’s face. Bingo. Fifteen minutes of runtime snipped. That’s all it would have taken to put this movie on the right track.

Other than that, Uptown Girls is a sweet comedy that’s at its best when it focuses on Molly’s and Rae’s relationship. Dakota Fanning is an able straight player to Brittany Murphy’s goofy, sight gag-loving self, and it’s really enjoyable to see these two characters who have more in common than they think they do meet in the middle and bring out the best in each other. 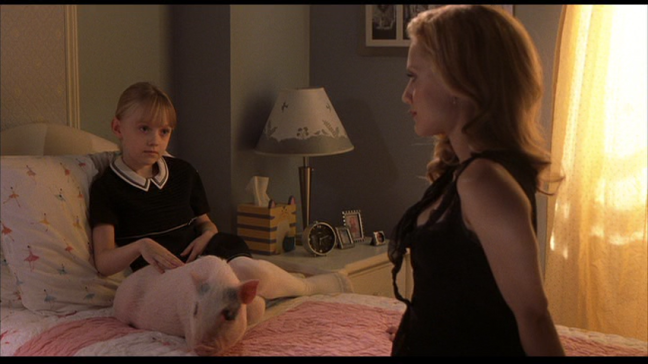 Another review is coming out on Wednesday. Thanks for reading, all, and I hope you have a good weekend…

Uptown Girls is available on DVD and Blu-ray from Amazon.

One thought on “It’s A Charmed Life”

Todays's Taking Up Room review is the BBC production of "The Mother," starring Anne Bancroft as the title character. It's about coming to terms with aging, both for the older person and their family. Link in bio. #blogsofinstagram #themother #annebancroft #joancusack
Taking Up Room goes to rare book heaven today with a look at the 2020 documentary, "The Booksellers." Anyone who loves books will probably LOVE this film. Link in bio. #blogsofinstagram #thebooksellers #parkerposey #franlebowitz
Taking Up Room is participating in @dellonmovies' Against the Crowd Blogathon, where bloggers tell which popular movies they dislike and which unpopular ones they like. As you can see, I picked "Indiana Jones and the Temple of Doom" and "The Happening," but which movie made which category? Click the link my bio to find out. #blogsofinstagram #thehappening #indianajonesandthetempleofdoom #georgelucas #mnightshyamalan #harrisonford #markwahlberg #katecapshaw #zoedeschanel