When looking at America’s entry into the Second World War seventy-plus years on, it might be hard to believe how high the stakes really were in early 1942. The United States’ armed forces were very small, we were still using cavalry horses and bayonets, and the Japanese dealt Americans heavy blows at Pearl Harbor and other locations in the Pacific. We and our allies kept losing. The Brits lost Shanghai, America lost Guam, Wake Island and Bataan, which were followed by the loss of Corregidor in May, and the Nazis were well into the Final Solution. It was a very bleak period.

However, the Doolittle Raid changed the war’s dynamics, not only putting Japan on the defensive for the first time, but giving Americans a major morale boost. One person to tell its story was Major Ted Lawson in his 1943 book, Thirty Seconds Over Tokyo, later made into a feature film of the same title.

Ted Lawson was born in Fresno, California in 1917 and studied aeronautical engineering at Los Angeles City College while training in the Army Air Force Reserves. He and his wife, Ellen Reynolds, married in September of 1941 and she followed him from base to base as Ted flew maneuvers in various bombers.

Like a lot of servicemen, Lawson volunteered for the raid sight unseen–all he knew was he’d be out of the United States for two to three months, and that he wasn’t to discuss any part of the mission with anyone, not even Ellen.

Lawson, who piloted the Ruptured Duck, and the other men who trained for the mission spent months in their respective B-25s learning how to take off using little to no runway, which is not what these types of planes were designed to do. The pilots had to rev the engines to a very high pitch, put their flaps down, and all but levitate. It didn’t make sense, but it had been done before. Lawson’s book doesn’t mention it, but according to a 1970 interview with General Jimmy Doolittle, a Navy captain named Francis S. Lowe originally came up with the idea.

After a hedge-hopping flight to Alameda, the crews and their planes boarded the U.S.S. Hornet and set out across the Pacific. It wasn’t until they were well underway that the Army personnel were finally told what the plan was: They were to bomb Tokyo. First they would take off from the carrier vessel, bombing mostly factories and military targets in the city, and head for China, where they would land at preselected sites.

Unfortunately, the Hornet was sighted by Japanese vessels before the carrier reached the location where the planes were going to take off, so the bombers had to launch sooner than expected. This was risky because it meant the planes would run out of fuel sooner than planned and might have to ditch anywhere but the rendezvous points.

Once the bombs were dropped, the various crews tried to head for China but fuel ran out and the weather turned rainy. Doolittle’s group bailed out over the mountains, some crews landed off the Chinese coast, and one crew decided to land in Russia because it was closer. Two crews were taken prisoner by the Japanese. Of those groups, three members were executed, one died of beri-beri and malnutrition, and the remaining crewmembers languished in POW camps until their release in 1945.

The Ruptured Duck was one of the planes that ditched off the Chinese coast. Except for the flight engineer, Staff Sergeant David Thatcher, all were thrown out of the plane through the front window and nose, causing severe injuries. Thatcher remembered later that if his crewmates hadn’t been thrown out they would have never escaped the plane at all, since it crashed upside down. Thanks to Thatcher and members of the Chinese Underground, the Duck’s crew was evacuated to a mission run by Bessie and Frank England and later out of China.

Lawson had the worst injuries of all. His leg was busted wide open, his jaws were shattered, and his left arm was severely cut. Fortunately, the mission’s flight surgeon was able to get to Lawson and the crew, but Lawson’s leg eventually had to be amputated and his jaws reconstructed.

Once back in the United States, Lawson began the lengthy recovery process and then started work on his book with the help of Bob Considine. The book mixes Lawson’s semi-conversational tone with Considine’s journalistic style, and in its favor it only gets technical enough to make sense. MGM bought the rights and the film premiered in New York and China on November 15, 1944.

I saw the movie for the first time when I was about ten, then read the book when I was in junior high and found a Landmark edition in the Auburn library. It was quite an eye-opener because all I knew about the war at the time came from Production Code-era movies and what I heard from my parents and adoptive grandpa. There was a little profanity in Lawson’s book, which shouldn’t have shocked me but it did, plus there was quite a lengthy description of Lawson’s amputation.

The movie toned all of this down quite a bit, of course. Other than that, it’s meticulously accurate in the way it portrays how the mission was planned and executed, including actual footage from the Hornet, with an emphasis on the utmost secrecy of it all. It shows a lot of guys who were very fresh-faced, fun-loving, and pretty naïve at the start, but then who sobered up and grew up.

It was Van Johnson’s first lead role and a rigorous one, considering that Johnson was recouping from serious injuries following a car accident, and scars from the skull lacerations he suffered can be seen in the last few scenes of the film. According to Johnson biographer, Ronald L. Davis, Johnson had to go to bed early every night and watch his diet very carefully. He puts in a wonderful performance, and his friendships with both Phyllis Thaxter and Spencer Tracy are evident onscreen.

Thirty Seconds was shot in Florida, with Ted Lawson serving as technical advisor, although General Hap Arnold, General Doolittle and two Ruptured Duck alum, David Thatcher and Dean Davenport, were also on the set. Real B-25s were used, of course, but the shoot was delayed several times by bad weather.

The film was a tremendous success, grossing $4.5 million for MGM and an Oscar for Special Effects wizard Buddy Gillespie. The public loved Van Johnson as Ted Lawson, and the most common kudo was how natural and relatable he was in the part. 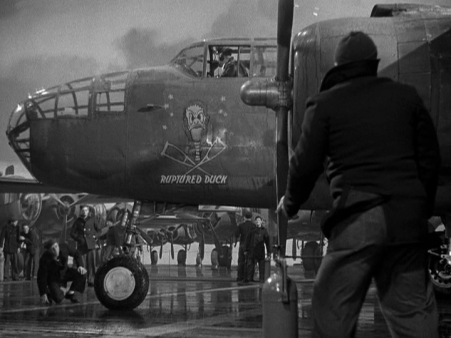 After the war, Ted and Ellen moved to Chico, California, where they raised their three children. Lawson died in 1992, followed by Ellen in 2009. The surviving Raiders fanned out to their various lives and reunited once a year, turning over silver goblets as their numbers dwindled. David Thatcher and Richard Cole were the last survivors, passing away in 2016 and 2019 respectively.

Thirty Seconds still holds up extremely well in both book and film form, and especially as the war gets farther and farther in the past, they are testaments to the men who struck a deciding blow against the enemy and gave others hope in a very dark year.

More posts are on the way next week. Thanks for reading, all…