Doris Day was, of course, typically cast as a plucky, elegant songstress or would-be songstress, but few roles she played were as unique as 1953’s Calamity Jane, a musical very loosely based on the life of the famous Wild West figure. Well, unique to Doris Day, anyway.

The movie opens with Calamity Jane (Doris Day), riding into Deadwood City, South Dakota on the stagecoach. She’s kind of a star around those parts, because she can outride, outshoot, and outrope any man in town. Her voice is a lusty mix of Ethel Merman and Marjorie Main. She’s one of the guys. Wild Bill Hickok (Howard Keel) is her best friend and Lieutenant Danny Gilmartin (Philip Carey) is the guy she’s stuck on, except that he doesn’t think of her as a woman. 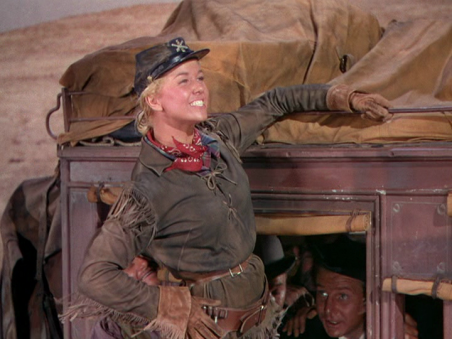 Henry (Paul Harvey), the owner of local saloon, the Golden Garter wants to secure a female singer for his stage because the town needs more women, and he sends for a promising soul, Frances Fryer (Dick Wesson), who, to his horror, turns out to be very much a male. Afraid his audience will tear the house down, Henry sends the poor guy out in drag, which goes over about as well as can be imagined. Calamity Jane, who shall hereafter be known as Calam, volunteers to go to Chicago and bring back Adelaid Adams (Gail Robbins). Calam saw Adelaid’s picture on Bill’s cigarette wrapper.

Bill asks to come with Calam on her great expedition. For protection, of course. Calam is aghast at the idea, and she and Bill rather stormily sing “I Can Do Without You” at each other. 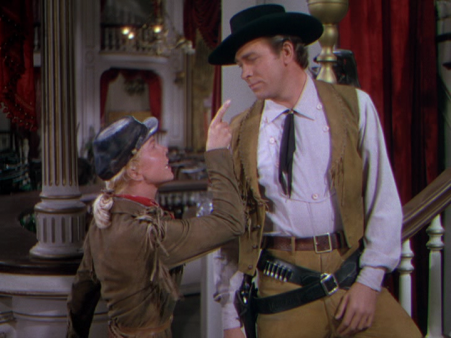 Did anyone who’s heard this song notice something familiar? Hold that thought.

Calam high-tails it to Chicago, where she finds who she thinks is Adelaid Adams and brings her back to Dakota City, but, long story short, it’s really Adelaid’s maid, Katie Brown (Allyn Ann McLerie). The real Adelaid went to Europe after her engagement ended in Chicago and left Katie all her costumes. It’s an honest mistake, but Calam has to talk fast. Give Katie a chance, she says. It works; Katie becomes a star among the Deadwood crowd. 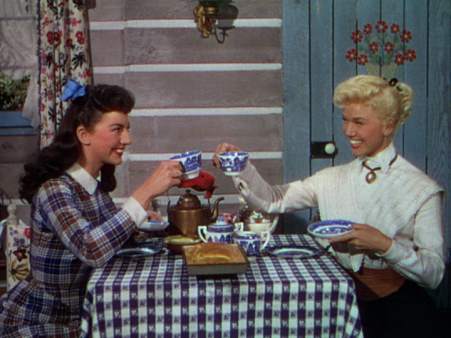 Calam and Katie move in together because they’re two women in a town full of men, but Katie has no idea what Calam’s cabin looks like, and like Calam, it’s pretty rough around the edges. The only thing missing is a spitoon in the corner of the room. Naturally, it’s time for a makeover for both the cabin and Calam.

When Bill and Lieutenant Dan come for a visit, they’re in for a shock. Calam’s formerly ramshackle dwelling is now cute as a button, with a basket of flowers painted on the back door and a nice sideboard full of pretty china. The cabin has nothing on Calam, though, who comes back from a visit arrayed in a bright yellow dress and mud from falling in the creek.

Calam’s new look sets up a new dynamic for her in Deadwood, and a rivalry between she and Katie ensues. Nope, not gonna ruin anything, not that it isn’t hard to figure out.

The real Calamity Jane probably would have liked the way she was portrayed on film. We don’t know the extent of her relationship with Wild Bill Hickok, but we do know Jane liked to tell tall tales, one of which was that she married Hickok. Jane even claimed to have captured Hickok’s murderer, Jack McCall.

While there’s no proof of any of that (most historians call it nonsense), Jane, whose real name was Martha Jane Cannary, is buried next to Wild Bill, so there’s no doubt the legend will live on in some form.

So yeah, about that familiarity I mentioned: Calamity Jane‘s derivative qualities are more than a little obvious, starting with “I Can Do Without You,” a fun little tug of war not unlike “Anything You Can Do I Can Do Better,” from Annie Get Your Gun, and it’s a funny coinkidink they both feature Howard Keel. “Windy City” is remarkably similar to “Kansas City” from Oklahoma!, as is “Higher Than A Hawk” to “The Surrey With the Fringe On Top.” 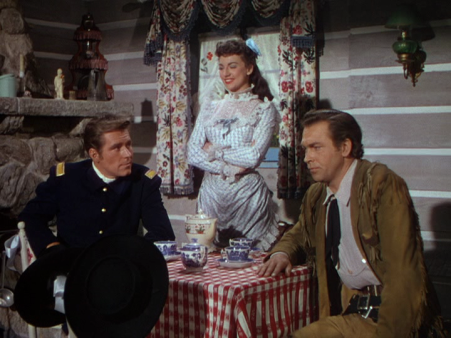 Granted, the similarities are not nearly to the level of “Be A Clown” and “Make ‘Em Laugh,” but it was close enough that the vast majority of the critics at the time of the film’s release noticed. Bosley Crowther noted the Howard Keel connection. Variety caught the Oklahoma! and Annie Get Your Gun flavors. So did the LA Times. Clyde Gilmour of MacLean’s was simply “meh.”

Doris Day would have begged to differ with Mr. Gilmour. She loved being in the film and considered it her favorite role, because Calamity Jane’s bluster and affinity for riding and shooting were right up her alley:

Calamity Jane is the real me. When I was a little girl I was a tomboy. I liked to do what the boys did–climb trees, go skating. Yet at the same time I loved dolls…I loved playing house. I pretended I was married and I would cook and had babies. (Santopietro)

Day got to be herself in another way as well. One of the film’s standout numbers is “Secret Love,” which netted an Oscar for Best Song, and it works because it shows a balance in Calam’s character since recognizing something that was in her life all the time. She’s in trousers, but she rides sidesaddle. Her rough edges are smoothed down and her eyes twinkle happily.

Calamity Jane does best when it’s not trying to be anything but itself, and as long as it’s Doris Day, it’s pretty darned enjoyable. It’s got a ton of energy and shows a new side to Day, who was much more than an ingenue songstress. 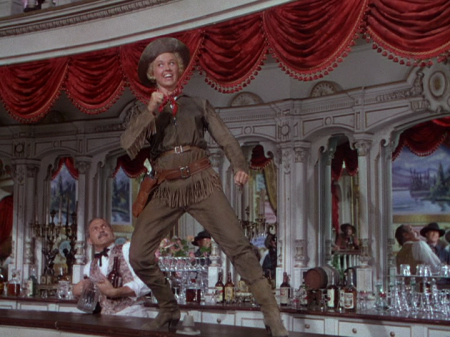 For more of the legendary Doris Day, please see Michaela at Love Letters To Old Hollywood. Thanks for bringing this blogathon back, Michaela–it’s been a blast as usual! As always, thanks for reading, everyone, and see you tomorrow for our final event of the weekend…

Calamity Jane is available on DVD and Blu-ray from Amazon.

2 thoughts on “A Woman’s Touch”