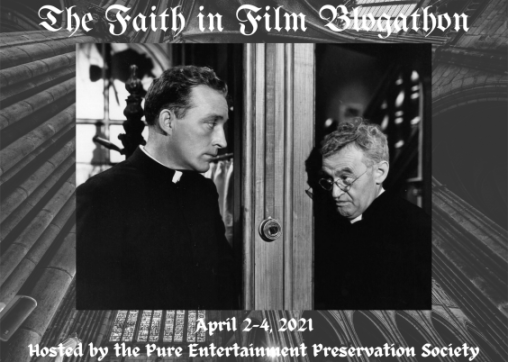 “Truly I tell you, if you have faith as small as a mustard seed…Nothing will be impossible for you.” (Matthew 17:20, NIV)

Mention 1993’s Rudy and a lot of sports fans will get misty-eyed. My dad is one of ’em. Based on a true story, the movie follows Rudy Ruettiger, a guy who flew in the face of naysaying and did what he dreamed.

Rudy, played by Sean Astin, grew up in Indiana playing football with his brothers. Well, he tries, anyway. What Rudy lacks in size he makes up for in energy and tenacity, and while he might not be the starting player on his high school football team, he’s got the respect of both the coaches and his teammates.

The Ruettiger family are major Notre Dame fans, with Rudy being the most ardent. He knows Knute Rockne’s speeches by heart and will recite them if given half a chance. Rudy dreams of playing football for Coach Ara Parseghian at Notre Dame, but unfortunately his grades aren’t nearly good enough. Instead, he goes to work at the local steel mill with his dad, brothers, and best friend, Pete (Christopher Reed). He might have it made; after all, his longtime girlfriend, Sherry (Lili Taylor) just picked out a house, and he’s making pretty good money, but Rudy just can’t stop dreaming about Notre Dame.

When Pete dies in an accident, Rudy realizes it’s now or never, and he takes a bus to South Bend. His dad, Daniel (Ned Beatty) tries to discourage him: Why mess with the status quo? College is for the rich, athletic and smart. Rudy goes anyway because he knows he won’t be good for anyone if he doesn’t. 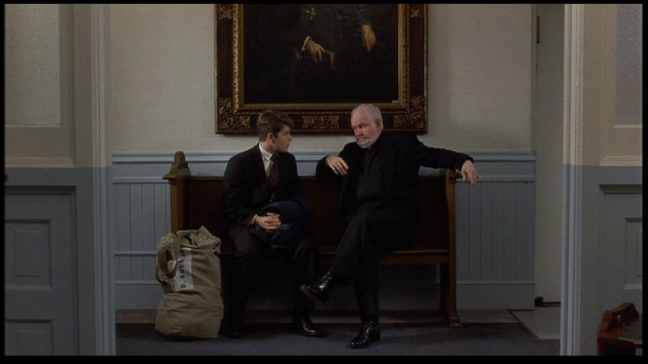 Once in South Bend, Rudy heads straight for the Notre Dame campus, where a kindly priest, Father Cavanaugh (Robert Prosky) makes a deal with him: He can have a semester at nearby Holy Cross College. If Rudy makes high grades, he can have another semester, and so on, until he has a shot at getting into Notre Dame.

Rudy jumps at the chance and as usual he throws himself into academics, earning better grades than he thought he could. Not only does he find out he has dyslexia, but a guy named D-Bob (Jon Favreau) offers to tutor Rudy for free if Rudy promises to introduce him to girls around the campus. In between he prays like fury and lights loads of candles at the campus Lourdes grotto. 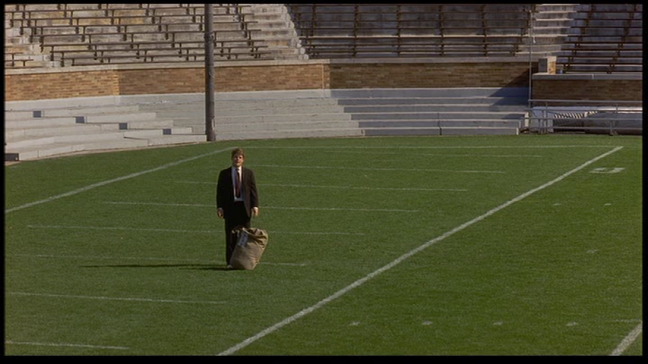 When a gruff groundskeeper, Fortune (Charles S. Dutton) catches him hanging around the field, Rudy begs for a job. He’ll work for free if he has to. Fortune pays him minimum wage and leaves a key on the cot when he finds out Rudy’s been secretly sleeping in the groundskeeper’s office.

Things come down to the wire when Rudy finally gets his transfer to Notre Dame, and he’s so happily stunned all he can do is weep and stare at the lake as the sun sets behind him. However, his dream suffers a setback when Coach Parseghian (Jason Miller) retires and his replacement, Coach Devine (Chelcie Ross) doesn’t hold the same allegiance to him. Rudy’s final game may come and go without his getting to dress if not for his supportive teammates who line up to turn in their jerseys in protest. 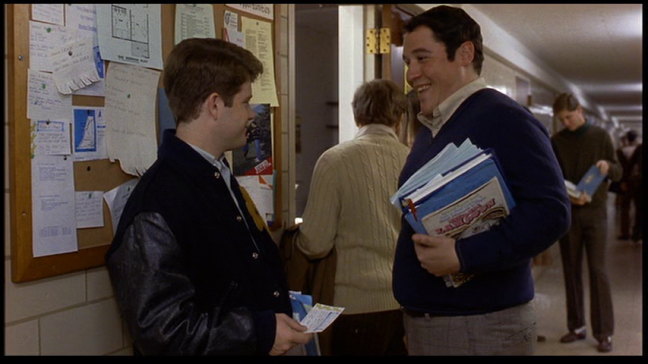 Since this is a true story, we all know where it goes. Rudy dresses for his last game, hears his name chanted, wins over his skeptical family members, and has his great moment on the football field, capped by being carried off by his adoring teammates, all of whom consider him their mascot and inspiration. Oh, and D-Bob falls in love. So everyone wins.

The movie did ruffle some feathers. The real Coach Devine wasn’t happy that he was made out as an unfeeling jerk. The near-mutiny never happened; Devine was one of Rudy’s biggest supporters, unlike some of his teammates, and there was never a doubt Rudy would dress at his last game. It’s somewhat less dramatic than the film portrays, though. According to classmate Joe Montana, Rudy was carried off the field as a prank and there was no chanting. However, he did sack Georgia Tech’s quarterback, so there’s that. No one’s ire lasted too long, though–Rudy and Coach Devine were friends right up until Devine’s death in 2002. 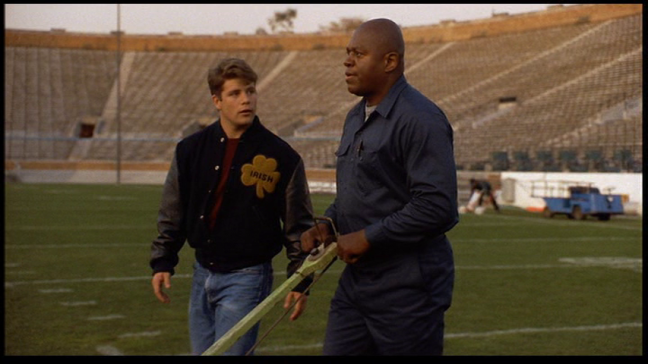 What makes the movie less than typical is Sean Astin’s performance. He’s in almost every scene and really carries the film with an understated earnestness that people can’t help but feel for. There’s a lot of maturity in Astin’s approach to the character. He’s always been a talented actor, but Rudy showed him as a force to be reckoned with. He’s supported by a stellar cast, especially Robert Prosky and Charles A. Dutton, who don’t hesitate to remind Rudy how far he’s come when he thinks he’s only spinning his wheels. It would be a tough cop-tougher cop dynamic except that the two of them never share screen time.

Rudy is filmed in an understated way as well. There aren’t any odd angles or huge vistas; it zeroes in on Rudy and those he comes in contact with. There’s a lot of focusing on faces, which gives the film a very personal feel, as if it’s a conversation between Rudy and the audience. When Rudy finally gets into Notre Dame, we don’t see anything but Sean Astin sitting on the bench staring and weeping at his letter. Then when the character is ready to move into a new chapter the camera pans up to show the lake and Rudy walking down the path into the sunset. His dream has come true and he’s ready to embrace it.

I think that’s why Rudy continues to be a beloved film almost thirty years later: We want to stand in the shoes of those whose dreams have come true, if not be that person. It’s like Pete tells Rudy right before he dies, “Dreams are what make life tolerable.”

For more of the Faith In Film Blogathon, please see Tiffany and Rebekah at Pure Entertainment Preservation Society. Thanks for hosting, ladies–I hope you can bring this one back! Thanks for reading, all, and I hope to see you tomorrow for Michaela’s Doris Day Blogathon…

Rudy is available on DVD and Blu-ray from Amazon.

One thought on “Rudy, Rudy, Rudy…”