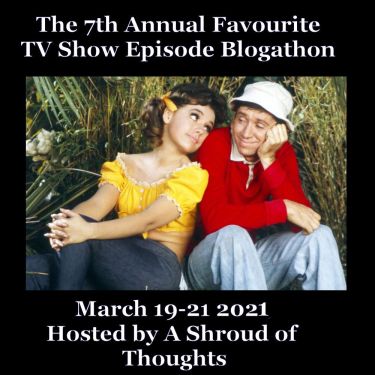 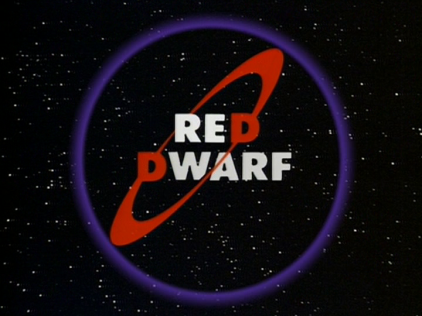 Ah, Red Dwarf. Part Star Trek send-up, part Hitchhiker’s Guide To the Galaxy and part sitcom, it’s original enough that it’s taken on a life of its own since its 1988 debut. It’s such a big deal that the Red Dwarf Fan Club holds a convention every year, with cosplay and panel discussions with cast members. There was even an ill-fated attempt to make an American version starring Craig Bierko and Chris Eigeman, but that’s another story.

For those who aren’t familiar with Red Dwarf‘s premise, it’s about slobby chicken soup machine repairman Dave Lister’s (Craig Charles) lonnnnng journey back to Earth. He’s put in stasis as punishment for sneaking a cat on board his ship, but doesn’t come out of it for a million years. Lister wakes up to find the crew are all dead except for his hated roommate, the neurotic Arnold Rimmer (Chris Barrie), who has survived in hologram form. The cat Lister smuggled aboard has long since evolved into a humanoid feline race, one of whom, appropriately named Cat (Danny John-Jules), roams all over the ship.

Along with Holly (Norman Lovett and later Hattie Hayridge), Red Dwarf‘s computer, the remaining crew members have quite the odyssey as they make their way back to Earth. Along the way they gain a droid named Kryten (Robert Llewellyn) and Lister’s longtime crush, Kristine Kochanski (Chloe Arnett), the latter of whom inadvertantly hops over from an alternate dimension in Series Seven.

One of my favorite episodes is “Backwards.” The Series Three premiere originally aired on November 14, 1989 and is immensely clever. For a Red Dwarf newbie, it’s a great place to start. 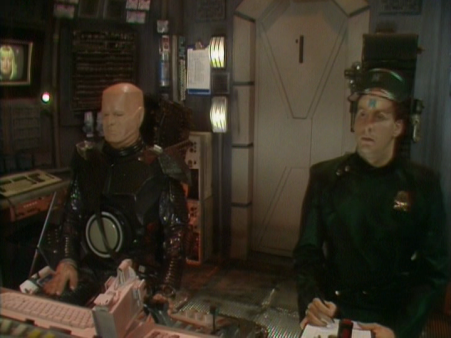 The episode begins with Rimmer giving Kryten flight lessons aboard a Starbug shuttlecraft, when they accidentally fall into a time hole and end up on Earth in 1993.

Only it’s not quite Earth. Everything is backwards. Words are spelled backwards, people talk backwards, walk backwards, and eat and drink backwards. History is in reverse, which means that in fifty years the Second World War will start and Hitler will retreat across Europe. Taking the money out of a charity jar is being generous. And people age backwards, ending up…well, where everyone starts out. It all happens as slowly and sloppily as possible, so we have more time to take in the abnormality.

Kryten and Rimmer are quick on the uptake, aided by Kryten’s ability to reverse his speech, and it doesn’t take them long to realize they have a distinct advantage.

Meanwhile, Lister and Cat go after their stranded crewmates, parking their Starbug in a lake and stealing a tandem bike, which, to their frustration, only moves backwards. They try to talk to people, but everyone seems to be speaking Bulgarian. Eventually, they hitch a ride to Nodnol (yeah, London spelled backwards) where they find Kryten and Rimmer have become the Sensational Reverse Brothers, able to astonish and amaze audiences with Kryten’s ability to eat an egg…forwards. Lister and Cat think the audience members remarkably simple, but then they belly up to the bar to order two pints of bitters or “erskib,” and are mystified when the bartender hands them two empty glasses and a pound coin.

When Lister and Cat finally talk to Rimmer and Kryten backstage, they find two happy Dwarfers. They’ve been making the rounds on the pub circuit and don’t want to leave because they’re now revered among Nodnolers…er, Londoners. The world running in reverse makes more sense to them. There’s no death or crime and the people appear happier.

Not gonna spoil the ending, but chickens still come home to roost even when the world seems backwards. 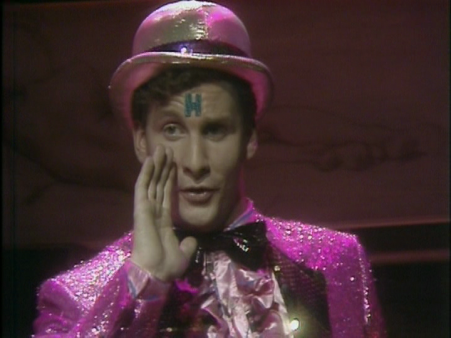 Filming and editing the episode took some doing. All of the footage was shot normally, but some of it was played backwards and some of it wasn’t. The tricky part was that a single scene could have forwards footage joined up to backwards footage or vice versa, which wasn’t at all confusing for anyone. Even within scenes some actions were done as if they were backwards, such as Lister ordering the bitters and Rimmer working the crowd during the Reverse Brothers show. It doesn’t come off completely seamlessly, either–there’s a barroom brawl scene in which the director can be heard yelling, “Action!” at the end of the fight. Storyboarding this puppy must have been a nightmare.

The thing about Red Dwarf is, to paraphrase a certain line from Longfellow: “When it’s good, it’s very, very good, and when it’s bad it’s horrid.” In other words, I can only recommend this show with reservations because there’s a lot of bawdy guy humor, which some viewers may find off-putting. Most of it isn’t subtle, either, so families may want to take evasive action.

Plus the show hasn’t aged well. Over the years the humor has gotten cruder, the storyline feels more and more played out, and the cast members are getting too old to make the dynamics of the show believable. Yeah, looking at you, Rimmer. Love ya, but holograms aren’t supposed to age. Theoretically.

So yeah, pretty much anything after Series Six isn’t worth watching, apart from a few cool moments, like Cat dancing in the launch bay and anything involving Ace Rimmer, Arnold’s alter ego. The Back To Earth miniseries is an enjoyable bit of navel-gazing, too. The rest is easily discarded (Who knows, someday I may do a Top Ten list of favorite episodes for those who want to sift out the good stuff or maybe just head down Memory Lane, but I digress).

Anyway, Series Three is when the characters were properly established and the show looked lived in, so it feels relaxed. The show also had a new production designer and more money, so the flat grey look of the ship in the previous two seasons was now a bright cream with suitably intergalactic texturing. Also unlike the previous two seasons, Series Three got the characters off the ship now and then, and “Backward” kicked things off with gusto.

For more of the Favourite TV Show Episodes Blogathon, please see Terence at A Shroud of Thoughts. Thanks for bringing this one back, Terence–it’s a fun one! Thanks for reading, all, and see you tomorrow for the Luck of the Irish Blogathon…

Taking Up Room goes to rare book heaven today with a look at the 2020 documentary, "The Booksellers." Anyone who loves books will probably LOVE this film. Link in bio. #blogsofinstagram #thebooksellers #parkerposey #franlebowitz
Taking Up Room is participating in @dellonmovies' Against the Crowd Blogathon, where bloggers tell which popular movies they dislike and which unpopular ones they like. As you can see, I picked "Indiana Jones and the Temple of Doom" and "The Happening," but which movie made which category? Click the link my bio to find out. #blogsofinstagram #thehappening #indianajonesandthetempleofdoom #georgelucas #mnightshyamalan #harrisonford #markwahlberg #katecapshaw #zoedeschanel
Today on Taking Up Room we will be looking at the 2008 documentary, "102 Minutes That Changed America." This film is made up entirely of found footage taken in New York on 9-11, some amateur, some professional, but all of it in the terrifying moment. Link in bio. #blogsofinstagram #102minutesthatchangedamerica #nineeleven #911twentyyearslater #neverforget