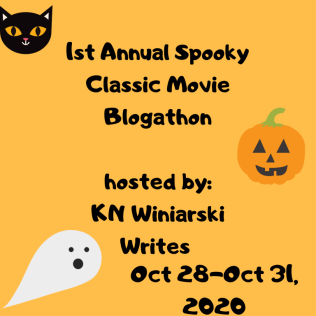 Even the dark house subgenre has its cliches. The jumpscare. The dark and stormy night. The literal skeletons (and maybe various body parts) falling out of closets. Lots of screaming. Oh, and let’s not forget the Spend-the-Night-In-the-House-And-Win-Something trope. 1958’s House On Haunted Hill ticks all these boxes, adding in a bit of camp and the incomparable Vincent Price for good measure.

The disembodied head of Watson Pritchard (Elisha Cook, Jr.) floats toward the screen by way of an opener. He owns the House on Haunted Hill and six people, including his brother, all died there. Then we see the house and the disembodied head of Frederick Loren (Vincent Price), who tells of how his wife, Annabelle (Carol Ohmart) rented the house to throw a party and give ten thousand dollars away to whoever can make it through the night. 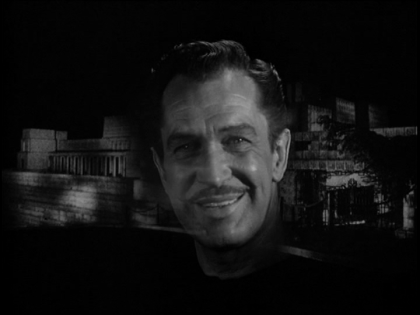 There’s a fighter pilot by the ever-so-macho name of Lance Schroeder (Richard Long), the strong and steady Dr. David Trent (Alan Marshall), columnist Ruth Bridges (Julie Mitchum), working girl Nora (Carol Craig), and Watson Pritchard, just to round things out. None of these people know each other or the Lorens, so there’s no prejudice going on. There is a bit of foreboding, though–Frederick hired hearses to bring the guests up to the house.

Off in one of the bedrooms, Frederick and Annabelle are getting ready for the party. Well, Frederick is, anyway. Annabelle says she’s not joining the group. She doesn’t want to because she has a headache. However, there are deeper secrets waiting to be revealed, and the Lorens’ marriage is not in great shape.

When Frederick finally does greet his guests, he lays down the ground rules. Anyone who doesn’t want to stay can leave as long as it’s before midnight, but they won’t be paid. Whoever chooses to stay will be locked in. The household staff, Mr. and Mrs. Slydes (Howard Hoffman and Leona Anderson) are leaving at midnight and they always lock the doors. Those who make it through the night will receive ten thousand dollars apiece. If Frederick happens to die,

There are party favors, too–a set of .45-caliber handguns, each in its own coffin-shaped box. They just might come in handy, since no one knows who they can rely on, although what good a gun is against a ghost is kind of moot. 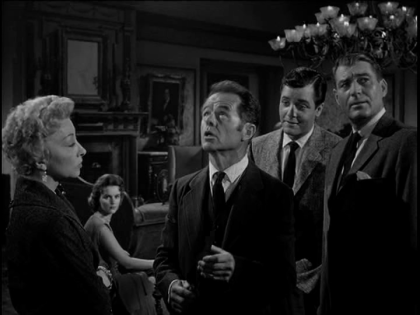 Watson helpfully takes the group on a tour of the house, and he tells how the six people died in the house over its hundred-year existence, either by hanging, gunshot, or being boiled in the acid pool in the house’s wine cellar.

Naturally there’s further exploration of the house throughout the night, and naturally there are doors that can’t be opened from the inside once shut. There also may be various body parts left around in odd places such as Nora’s suitcase, only to be gone once the alarm is raised. The caretakers may just decide to poke around the house before they lock up. There might be a dead body or two. And there just might be a floating skeleton ready to to rattle dem bones.

The acting in the film is well-done, and even though the characters are types, they reveal aspects of their personalities and motivations that might catch the viewer off guard. Nope, not gonna give spoilers, except that sometimes it’s a toss-up as to who can scream the loudest.

Vincent Price came to star in the film by accident. Director William Castle spotted him having a piece of pie in a diner and the two of them hit it off. Everyone involved had a great time on the film, even adopting the skeleton, nicknamed Emergo, as the company’s mascot. 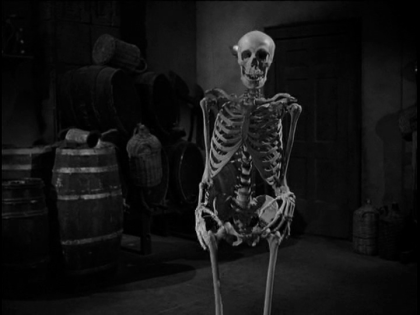 While The House On Haunted Hill had a budget of $150,000, it was done so cleverly that it looks like there was no expense spared. William Castle was good at gimmicky, effective horror films–when Macabre was released in 1958, its tagline claimed it was “so terrifying we insure you for $1000 against death by fright!”

Haunted Hill was no different. Screenings of the film had a certain interactivity to them, and this was long before The Rocky Horror Picture Show, thank you very much. Some theaters would rig up glow-in-the-dark skeletons and run them on wires around the audience when Emergo would appear onscreen. Naturally, the film, with or without a dangling Emergo, was a massive hit, grossing $4M.

The House On Haunted Hill has a couple of weak spots. The house looks Aztec on the outside and Victorian on the inside right down to the gas lighting, and the layout is weird. It definitely doesn’t match the Ennis House, which, by the way, recently sold for a cool $18M (see a video tour here). If the producers wanted a Victorian interior, it stands to reason they should have gone for a Victorian exterior as well, seeing as Victorian houses have some very distinctive characteristics.

In fairness, though, shooting inside the Ennis house wasn’t feasible. The owner at the time didn’t give his permission, and anyway, writer Robb White remembered the house being unrelentingly strange, with 22-foot high ceilings and a three-foot deep swimming pool with a horse statue in the middle of it. 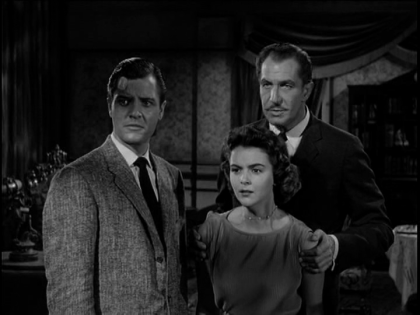 Another thing that made absolutely no sense was when Lance looks for Nora late in the film because he knows she’s scared out of her wits. Lance goes into Nora’s room, sees a severed head in the closet, doesn’t react, then grabs the head and presumably keeps looking for Nora. Horror films are typically known for characters making the worst possible choices, but this is a little funny. You don’t calm someone down by swinging disembodied heads at them. It doesn’t work, guys.

Other than that, the movie is a lot of fun and holds up to repeated viewings. It would have been fun to see it in the days when Emergo rattled around theaters, but maybe someone will recreate it.

For more spooky classics, please see Kristen at KN Winiarski Writes. Thanks so much for hosting, Kristen–this was fun!

Coming up in November:

If anyone’s interested in joining these, here are the people to see:

Thanks for reading, all, and hope to see you on Wednesday for a new “Page To Screen”…

House On Haunted Hill is available on DVD from Amazon. It’s also free to stream for Prime customers.