Who else had to read The Black Stallion for school? I did. Fourth grade. I can’t remember anyone complaining about it. In fact, Black Stallion books were kind of the rage in my class.

For those who haven’t experienced it, the novel follows New York City teenager Alec Ramsey and his friendship with a mysterious, very wild Arabian stallion. The horse is brought (dragged) aboard the Drake, the passenger ship Alec is traveling on after visiting his uncle’s horse ranch in India.

The stallion is so untamed no one can get near him, and the whole ship is kept awake by his angry kicking and pawing. Alec tries to soften him up with lumps of sugar, but they don’t seem to have much of an effect.

One stormy night there’s an explosion aboard the Drake and the ship sinks. Through a twist of fate and Alec hitching a ride on the Black’s halter rope the two of them are stranded on a deserted island. In this lowest of low pressure environments Alec is not only able to get close to the Black but discovers the horse can run like the wind.

Once the two of them return to civilization, Alec and the Black make friends with a former jockey named Henry Dailey, who lets Alec board the horse on his farm in return for doing odd jobs. When he sees how fast the Black is, Henry wonders if he would make a good racehorse. However, since the Black has no papers their only way forward is to enter a match race.

Author Walter Farley started work on the novel when he was still in high school in Brooklyn, publishing it in 1941. According to his family’s website, Farley thought The Black Stallion would be his only book, but to his surprise it was a huge hit.

After serving in the Army during World War Two, Farley wrote the second installment in the Black Stallion series, The Black Stallion Returns. He would write twenty-one books for the series in all, working up until his death in 1989.

Horses were a very natural subject for Farley, as his uncle was a trainer and Farley assisted him growing up. Since Uncle would hop between training racers and jumpers and so on, Farley was able to learn a little bit of everything, and he loved being around racehorses and jockeys. Throughout his life Farley trained and enjoyed horses with his wife and kids, who remembered there always being at least one horse in their backyard.

This experience came in handy when Farley was approached about making a Black Stallion movie. Farley hesitated at first because he wasn’t sure his story would play well on the big screen. In the end he gave his blessing to the project and worked as a consultant on the film, with his son, Tim along as a production assistant. The movie was filmed in Sardinia, Italy, and Toronto and starred Kelly Reno as Alec and Mickey Rooney as Henry, with Teri Garr as Alec’s mother and Clarence Muse as Henry’s friend, Snoe.

There were, of course, changes. Alec was about twelve in the movie, whereas in the novel he was in high school. Alec’s dad dies at sea in the film, but in Farley’s version he waits at home for his son to come back from India. The movie’s Alec is more of a novice around horses than his literary counterpart, but once he gets going he’s not a Mary Sue–he learns horsemanship from the ground up. Or down, as the case may be, seeing as Alec takes his share of spills.

For the all-important role of the title character, producer Francis Ford Coppola engaged show veteran Cass-Olé, an Arabian horse born and bred in Texas. Cass was a beautiful animal and he knew it, so he didn’t mind flexing his considerable acting chops. Trainer Corky Randall remembered, “He was almost human. He even had an expression on his face and horses don’t usually have expressions.”

There were two problems with Cass playing the Black Stallion: He wasn’t all black and he looked like a show horse. Cass’s white socks were dyed black, as was the star on his forehead, and he wore a weave in his mane to make his locks appropriately wild.

Cass wasn’t the only horse to get a bottle job for the film. While he completed about eighty percent of the scenes himself, he wasn’t much of a swimmer, so two French Camargue horses were brought in. Dubbed “Pete” and “Repete,” they weren’t the prettiest creatures, but once they got into the water they were incredibly graceful.

Cass’s co-star was a bit of a dark horse himself (See what I did there?). Kelly Reno wasn’t all that interested in TV or movies, but he auditioned for the role of Alec because he wanted to learn to swim. Stunt coordinator Glenn Randall put Reno through a crash course in a motel swimming pool, but swimming in the ocean water at Sardinia took some getting used to. In some places the water was over a hundred feet deep and so clear Randall and Reno could see right to the bottom. Randall recalled in after years that Reno was initially so freaked out that he practically walked on water to get back on the rock they were swimming around.

When it came to riding the Black, Reno was completely comfortable, having grown up on a ranch in Colorado. He and Cass became fast friends, and except for the match race scenes Reno performed all his own stunts.

One of the things the film does so effectively is how much story and character development happens despite the lack of dialogue in many scenes. The communication takes place through movement and interaction as opposed to spoken words. This is particularly apparent on the island, where the absence of other people gives the burgeoning friendship between Alec and the Black a unique stillness. It’s so immersive that when Alec talks later in the movie it seems almost foreign. 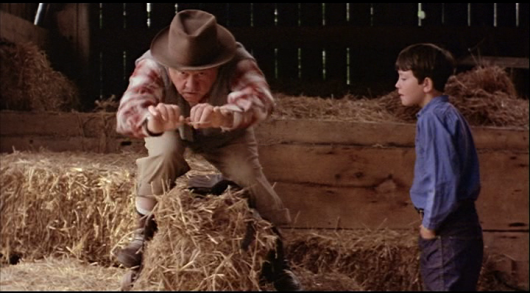 Very little dialogue meant that director of photography Caleb Deschanel could keep everything spontaneous and natural. The friendship developing between the Black and Alec is the friendship developing between Cass and Kelly Reno, who had lots of time to get to know each other. For the most part the crew let them be, well, within reason. They still had to film this thing.

Adding to the atmosphere is composer Carmine Coppola’s beautiful, expressive music. It’s this great blend of traditional American and Middle Eastern elements and always seems to be in motion, whether it’s clip-cloppy piano chords or rapid-flow woodwinds and strings. It’s is one of my favorite movie scores of all time next to Chariots of Fire and Star Wars. Here’s a small sample:

Both the movie and the book hold up nicely because it’s one of the few truly family-friendly stories out there. It doesn’t patronize or get rude for rude’s sake; it’s simply about a friendship.

Hope you’ll all check back this weekend for my contribution to Maddy’s Eleanor Parker Blogathon, plus a certain surprise event happening on Sunday. Thanks for reading all, have a good one…

The Black Stallion is available on Blu-ray and DVD from Amazon. Walter Farley’s original novel can be purchased here, also from Amazon.

A Turkish nobleman goes to work on the farm of a bereaved Montenegrin woman while they wait out the Montenegro–Ottoman War. Intrigue, labor relations, and a very patient goat round out this modest Cecil B. DeMille film.