I don’t know what I was expecting when I bought 1945’s The Enchanted Cottage. I didn’t even think much about the plot except that it might be some nice late-World War Two escapism. What I found, though, was a quietly beautiful story about two outsiders who discover that the world has more for them than they realize. For some reason it was promoted as being seamy and scandal-ridden at the time, but that’s not the case at all. Maybe someone in RKO’s publicity department got mixed up. Onward…

The movie opens at a gathering, where Major John Hillgrove (Herbert Marshall) is waiting to premiere his new piece. Unfortunately, a couple named Laura and Oliver can’t come because Oliver has to work.

John begins to tell the party a story about a cottage that’s always hosted honeymooners, and despite being partly burned down, is still a comfortable residence. So much happiness has lived in the house that it’s fairly soaked in it, and each couple who stays there carves their names on the front parlor window. It’s owned by a Mrs. Abigail Minnett (Mildred Natwick), whose own husband died during the First World War, and as far as she’s concerned, time stopped on April 6, 1917.

While on a walk by the cottage, John and his nephew, Danny (Alec Englander) meet Laura (Dorothy McGuire), a plain lady with a heart of gold. She’s recently returned to the area and would like a job as a maid at the cottage.

Her timing is fortuitous, because it just so happens that Oliver Bradford (Robert Young) and his fiancé, Beatrice (Hillary Brooke) want to rent it for their upcoming wedding trip. Oliver’s Army Air Force commission comes due in three months and he and Beatrice want to get married before he ships out. He offers to pay Mrs. Minnett up front, but she suddenly gets a glazed look in her eye and politely declines his check, telling Oliver that his commission will come sooner than he thinks.

In a supreme moment of topical irony, Laura notices Mrs. Minnett’s desk calendar is still set to April 6, 1917 even though the real date is December 7, 1941.

Like literally everyone else in America, Oliver and Beatrice change their plans, deciding not to marry until Oliver comes back from the war. Beatrice sends Oliver off with a brave smile while his mom, Violet Price (Spring Byington) and stepdad, Freddy (Richard Gaines) give him hugs, handshakes, and a St. Christopher medal.

Since they currently have no guests at the cottage, Laura decides to work at the local canteen. She spends months contentedly washing dishes until a well-meaning hostess sends her out to the dance floor to join the party, but Laura runs away when none of the soldiers will dance with her.

It isn’t long before Oliver comes back from overseas, and he sends a telegram to Mrs. Minnett asking to stay at the cottage. Alone. He’s been disfigured in the war and doesn’t want to see anyone, not even Violet, Freddy, or Beatrice, who go away in tears after one visit.

In spite of himself, Oliver begins to heal. He makes friends with John, who was blinded in the last war, and gathers driftwood with Laura. Oliver’s improvement is so marked that he balks when his mom and stepdad say they’re going to come up to the cottage and live with him, possibly bringing a trained nurse with them. Aside from some amiable moments, the Prices are snobby and thoughtless, and Oliver can’t even think about being under their thumb.

There’s another thing, too: Oliver and Laura get married. Oliver thinks it’s to keep the annoying relatives at bay. Laura’s in love with Oliver. However, when one lives in a honeymoon cottage, there might be some magic in the air. Put it this way: Our couple may find that they suddenly see themselves and the world around them differently.

The Enchanted Cottage was based on a 1922 play by Sir Arthur Pinero, who wrote it to encourage veterans and their families. It was immensely popular, opening on Broadway in March of 1923 and running for sixty-five performances. A silent film starring Richard Barthelmess and May McAvoy released the following year to dismal returns, and the property mostly languished for the next couple of decades or so.

With a new war came a new chance, and The Enchanted Cottage was updated in more ways than one. In previous versions, Laura’s ugliness amounted to such characteristics as buck teeth or a limp, but Dorothy’s McGuire’s Laura was just plain–no makeup, flat hair, and badly-fitting clothes. Cottage was her second movie after signing with David O. Selznik.

It was Robert Young’s second film with McGuire, and according to TCM, Young loved making the movie so much he hated to see it end. He even named his house in Westlake after it.

In the ensuing years, The Enchanting Cottage has never really died, but it hasn’t really lived again, either. A 2001 remake was planned, starring Cher, of all people, but it was thankfully scrapped. It wasn’t until 2016 that the film got a reboot, but it got a 3.8 overall rating on IMDb and is, by all accounts, a real turkey.

What I like about the 1945 movie is that it imparts a very sweet, comforting message to a changing world. The media of the time, at least on the surface, wore at least a veneer of optimism, but the reality wasn’t quite that simple. At the end of the war, servicepeople were thinking about returning home, families were thinking about what it was going to be like when their loved ones came back, and everyone was nervous and uncertain. Even if a veteran had no visible wounds, all who served changed. There were adjustments to be made, and naturally people were worried that no one would look at anyone the same way again.

The Enchanted Cottage did very well for RKO, at least from the audience’s perspective. The critics were mixed about the film. The performances were praised by Variety, but Bosley Crowther saw the movie as more of a horror film than a psychological one. 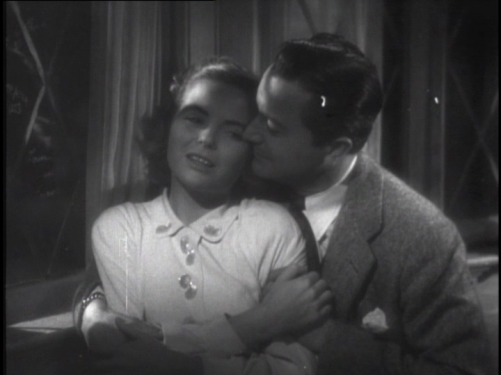 I don’t know about horror, but the aim of The Enchanted Cottage was to assure returning veterans and their families that when one looks through love’s eyes, beauty is always there. And one doesn’t need an enchanted cottage to see that. The whole movie must have felt like a warm blanket and chicken soup during a snowstorm. For that matter, it still does.

Gonna post a little reminder tomorrow about a certain upcoming event. Thanks for reading, all, and have a good one…

The Enchanted Cottage is available on DVD from Amazon.

3 thoughts on “Through Different Eyes”