When I was going for my degree, I had to read a lot of plays, and one of my favorites at the time was Tom Stoppard’s Rosencrantz and Guildenstern Are Dead. It’s an existential absurdist spinoff about Hamlet’s two college friends, and it’s like Groundhog Day in that the action takes place around the title characters. The aim of the play can be summed up in one sentence: “We do onstage the kinds of things that are supposed to happen off.”

In Shakespeare’s original play, Rosencrantz and Guildenstern seem to be Hamlet’s friends, when in fact they’re King Claudius’s spies, sent to keep tabs on Hamlet. Ostensibly Claudius is concerned about his nephew’s melancholy and wants to know why, but it’s really because he’s afraid Hamlet will revolt against him. Rosencrantz and Guildenstern are seldom referred to as individuals because their characters are that minor. They’re also not successful as spies because Hamlet guesses their real motives and trolls them but good, acting crazier than even his uncle thinks he is.

When the play opens, these guys are dinging around the countryside, with Ros flipping a coin over and over to see how often it comes up heads, while he and Guil reflect on the law of averages vs. the law of diminishing returns. They’re not in any terrible hurry to get anywhere, because they think the world is their oyster. They’ve got all the time they want.

One night the two of them are riding through the forest, when they come upon a traveling acting troupe, who see them and yell, “An audience!”

Ros and Guil look unnerved but don’t move. The leader, who’s only known as The Player, leads them through a free sample of what the troupe can do. Comedy? Tragedy? Sword fights? Romance? The rape of the Sabine women? This troupe can do anything, even above and beyond acting, times being what they are. They’re a colorful bunch, of course, particularly one fellow named Alfred who plays women for the group. He’s always wearing a dress and wig. Always.

Guil wants to know if the troupe can perform any tasteful classical works. But of course, says The Player, and Ros pulls out his gold coin and bets The Player he can’t guess which side the coin will land on. After a couple of tosses, Ros notices that the coin is tails up for once. It’s that moment when he and Guil realize the whole acting troupe is gone.

For that matter, they’re gone, too. Ros and Guil find themselves in the court of King Claudius, where Hamlet is chasing Ophelia around the great hall. The two of them flit off, but right after that King Claudius, Queen Gertrude, and the entire royal court pour in.

From there the play follows the original Rosencrantz and Guildenstern story arc pretty closely, only it’s from Ros and Guil’s point of view. Just as in the Shakespeare play, the acting troupe shows up to entertain the King and his court, only in Stoppard’s take they rib Ros and Guil about how they’ve finally caught up with them. Our two protagonists lurch from one scene to another, completely out of control of where they go and what they do, because they sense they’re only around to fill a destiny. After that, they’re expendable.

There may be something else to it as well, in an “I see dead people” kind of way.

Playwright Tom Stoppard has a background in absurdism. He seems to gravitate towards satire and parody because it gives him a bigger toolbox and fewer rules. If Stoppard wants contradictions and left-field plot devices, he can do that without sacrificing the integrity of the story. Everything is expected in absurdism and nothing is off the table.

We’re not sure what inspired Rosencrantz and Guildenstern Are Dead, but scholars speculate Stoppard got his idea from a 1949 book called The Idea of A Theatre, where its author, Francis Fergusson said that Ros and Guil lie at the apex of fortune and human awareness. They’re not exactly evil guys or good ones, either. They’re just there to serve a purpose without affecting or being aware of the story’s eventual outcome. Scholars also think that Stoppard drew from Samuel Beckett and Waiting For Godot, which is about two characters who don’t so much as progress as put in their time.

According to Britannica, Stoppard’s play premiered at the Edinburgh Festival in 1966 before becoming part of the British National Theatre repertory. It was immensely successful all over the world, netting Stoppard a Tony Award. 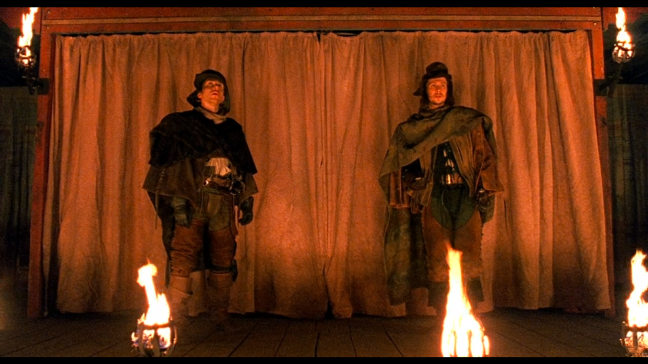 The natural next step was, of course, to make a film, and Rosencrantz and Guildenstern Are Dead hit theaters in 1990. Starring Gary Oldman as Ros, Tim Roth as Guil, and Richard Dreyfuss as The Player, it wasn’t exactly beloved by the critics. The most common descriptor at the time was “flat.”

Me, I’m kind of mixed. It can be pretty hilarious, building on what’s in the play. Around the campfire, Guil is carelessly eating while Ros seems to be sitting whittling, and then he holds up his creation…a rustic-looking Big Mac. With a fancy toothpick, no less. It’s a little touch of Monty Python in a Stoppard product. I like Gary Oldman and I like Tim Roth–they’re both fantastic actors and well-suited to these roles.

That said, I get why the critics called the movie flat. It looks like a play. A very static, by-the-numbers play. Stoppard’s method of filming seemed to be to park the camera and start shooting, and a story like Rosencrantz and Guildenstern Are Dead needs more than that. It needs interesting angles and to be as open as possible because it asks the viewer to suspend what they think they know about Hamlet. On the other hand, the film doesn’t need to be especially zany because the audience has to be able to draw a measure of credibility from it even while they suspend their disbelief.

The ideal Ros and Guil director in my opinion? Terry Gilliam. He would have taken a story like this and given it real oomph, plus he respects history and Shakespeare. He and Stoppard would have been a great team.

If anyone has a chance to experience Rosencrantz and Guildenstern Are Dead, I highly recommend it, especially if it’s the stage version. If it’s the film version, the best thing might be to close one’s eyes and think of Hamlet. It’s the kind of story to geek out over, whether one is a Shakespeare fan or not, although fandom helps. Stoppard’s story is witty, fun, and an interesting time.

Speaking of witty fun, I hope you’ll come back on Friday, when we’ll examine a pre-Code film by one of Hollywood’s classic directors. Thanks for reading, all…

Rosencrantz and Guildenstern Are Dead is available on DVD and Blu-ray from Amazon, as well as to stream for Prime customers.