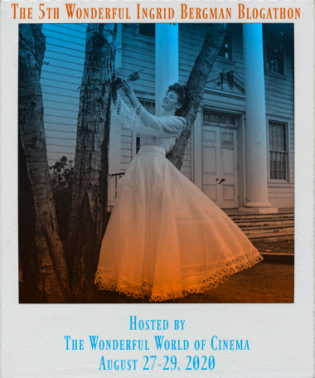 In the seventies, studios liked a lot of star wattage in their prestige films. Maybe it was because their output was so much smaller than it was in past decades, or maybe they were desperate to get audiences away from their TVs and back into theaters. It was probably both.

Either way, the more crowded the billing was, the better. One of these cinematic omnibuses, well, in this case, a train, was 1974’s Murder On the Orient Express. Among the many illustrious passengers was Ingrid Bergman, who played Swedish missionary Greta.

The film opens with a montage of Daisy Armstrong being kidnapped one night from her Long Island house. It’s pretty similar to the Lindbergh kidnapping in that Daisy’s father is Colonel Hamish Armstrong, a famous aviator, and there’s a ransom demanded. The big difference is that apparently the maid and the gardener are busy in the poolhouse at the time, and the papers speculate as to why they didn’t help rescue the little girl. In the end, like the Lindbergh baby, Daisy is found slain. This may become important later.

Five years into the future, we see a ferry docked at the Asian side of Istanbul waiting to take passengers across the lake. Most of them are going to be traveling on the Orient Express to Calais, and the train is unusually crowded for the winter.

Among those trying to secure a place aboard is Belgian Inspector Hercule Poirot (Albert Finney), and it just so happens that Poirot’s friend and owner of the rail line, Bianchi (Martin Balsam) is also a passenger. The train is crowded, but Poirot will share a compartment with another passenger. 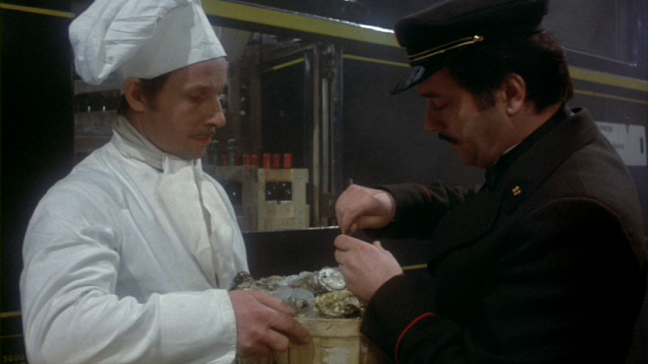 Things have to be absolutely top drawer in every way on the Orient Express. The conductor seems to speak every language fluently. He personally checks the oysters to make sure they’re the best quality. He knows the passengers will complain if absolutely anything is not to their liking, such as a plate being chipped. Yeah, these people are that finicky, but they expect it because they’re paying for luxury.

All of the passengers seem to be types at first, with little relation to each other, although they get chummy very quickly. Mrs. Hubbard (Lauren Bacall), a regular passenger, is a diva who thinks it unseemly that the faucet in her room burps when she turns it on. Greta (Ingrid Bergman) is a nervous missionary to Africa who seems to think her only distinction is being born feet first. 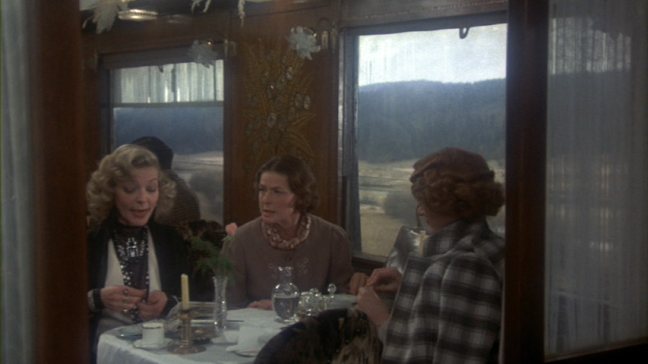 Last but not least is an American businessman, Mr. Ratchett (Richard Windmark) who brings along his personal secretary, Hector McQueen (Anthony Perkins) and a valet, Beddoes (John Gielgud). When he shows up at the station, a significant but almost undetectable look of recognition passes over Mrs. Hubbard’s face, but she says nothing and gets on the train.

Things are so peaceful the first couple days of the trip that it’s almost mundane. The passengers feast sumptuously and sit around shooting the breeze. Poirot is no different, sampling the oysters and sipping a glass of créme de menthe served on a silver platter. He drives Hector crazy at night, because apparently this Belgian snores.

Tragedy strikes when Ratchett is found dead in his bunk with twelve stab wounds in his chest, so it’s a good thing Poirot is on board. Since the train is also snowbound, he has the perfect environment to solve the mystery. The culprit could be anyone, of course, and everyone is a suspect.

One of the things that’s so effective about this film, and this is a common device in Agatha Christie stories, is that the mystery takes place in a closed environment. No one can escape and no one can enter. Everyone is forced to deal with themselves whether they want to or not, and if they don’t want to talk, Poirot has his ways.

The other thing about this movie is that it looks absolutely sumptuous, and naturally the train is another character in our little play. A very distracting character. As long as the Orient Express is moving, it’s all we see and it’s a pure pleasure. 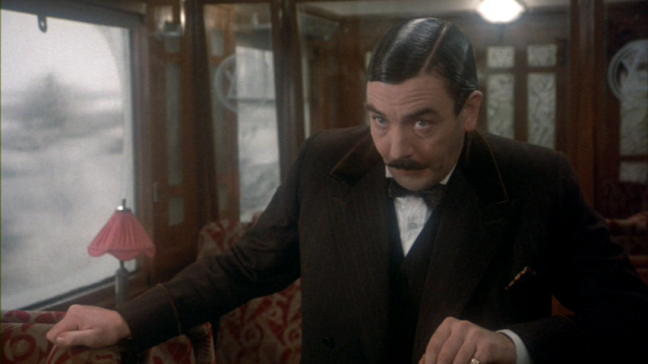 The timing of both the film and the novel was fortuitous. The story is set in the 1930s, when the Express was at the height of its popularity, and filmed at a time when the train was in temporary decline. Many of the cars had been retired, and three years after the movie premiered, the line quit running between Paris and Istanbul. The dining car used in the film is currently housed at the Railway Museum in Thessoloniki.

The cast had an absolute ball making the movie. Ingrid Bergman was a shoo-in for a role, and originally she was offered the part of the Russian princess but she didn’t go for it. Naturally, Bergman’s eye was on the Swedish missionary. It was small, but more than in her wheelhouse as a Swede. Director Sidney Lumet tried and failed to get Bergman to take a bigger part, but, as he said later, “She was sweetly stubborn.”

Bergman’s part may have been small, but she comes across in a huge way. She went out of her way to not be beautiful or look younger onscreen. What’s more, Greta seems scared of her own shadow. She doesn’t open up until Poirot questions her in the dining car. The scene lasts for five minutes straight with no cuts, which was by design. Lumet knew an actress of Bergman’s stature could really do something extraordinary with what is considered a long and intense take by film acting standards.

Not surprisingly, Bergman ran with it. Lumet said in an interview, “She ran the gamut of emotions. I’ve never seen anything like it.” 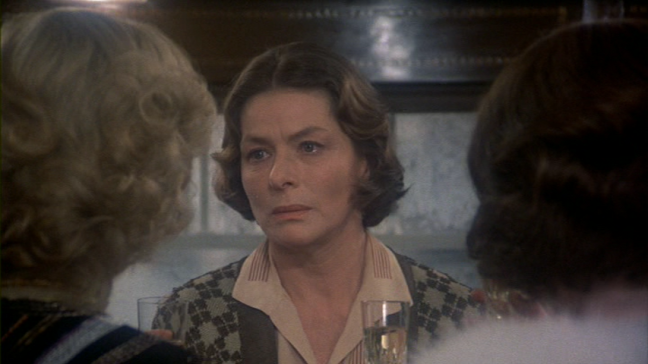 Bergman was thrilled to be in the cast of Orient Express, and especially starstruck to be working with John Gielgud, with whom she was also acting on the stage. Her costars were equally thrilled to be working with her, particularly Michael York, whose makeup chair was next to Bergman’s. He remembered how wonderfully unpretentious she was: “Generally, actresses are in the makeup room to be glamourized, but Bergman was there to be de-glamourized.”

Bergman’s Greta made such a big impression that she won an Oscar for Best Supporting Actress. Unfortunately, in her acceptance speech she said Valentina Cortese was more deserving. Yipe. It was pretty embarassing for everyone involved, and Bergman lamented her tendency to speak without thinking. 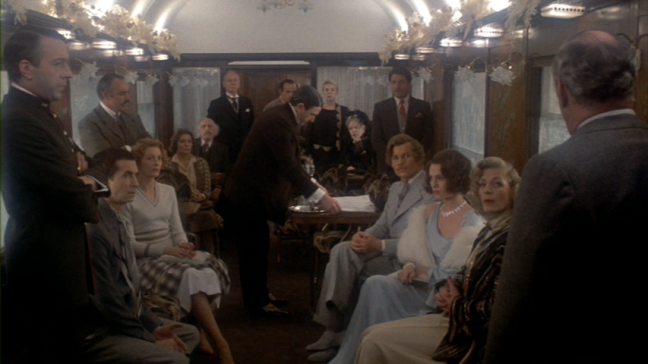 The years have been kind to Murder On the Orient Express. The film has been remade, of course, with Kenneth Branaugh heading an all-star cast, but there’s nothing quite like the 1974 iteration. It maintains its allure because of its sparkling setting, its sparkling cast, and its sparkling tribute to a time gone by. That the Orient-Express still exists today, albeit as part of a private company, makes the movie all the more intriguing, especially since the Paris-Istanbul route was temporarily brought back. And anyway, who doesn’t love a good mystery?

For more of the lovely Ingrid, please see Virginie at The Wonderful World of Cinema. Thanks so much for this latest visit with Miss Ingrid, Virginie–it’s always a pleasure. Thanks for reading, all, and I hope you’ll check back Monday for another Origins post…

Murder On the Orient Express is available on DVD from Amazon.

12 thoughts on “This Train Is Bound For Murder”