1945 was a weary year, but with the end of the war in August everyone was looking ahead to happier times and simple fun. The Rogers and Hammerstein film, State Fair fed into that desire. Based on a novel by Philip Stong, State Fair follows the Frake family as they head to the seminal event of their year.

Iowan Abel Frake (Charles Winninger) has been preparing a prize New Hampshire boar, Blue Boy. His wife, Melissa (Fay Bainter) has slaved away for the domestic arts competition, debating with Abel on how much brandy to add to her mincemeat. Son Wayne (Dick Haymes) is in the barn using his mother’s embroidery hoops to practice the ring toss. He’s disappointed that his girlfriend, Eleanor (Jane Nigh), can’t go to the fair because her mother’s sick.

Sister Margy (Jeanne Crain) is just bored. She’s restless and uneasy, wanting to break out of what she thinks is a small existence with everything mapped out for her. A boy in town, Harry (Phil Brown) wants to marry her, and Margy can’t think of anything more unappealing, especially once Harry tells her about the ultra-modern farmhouse he plans on building. No rugs, no carpets, no plants in this place. Just linoleum and scientific innovation. 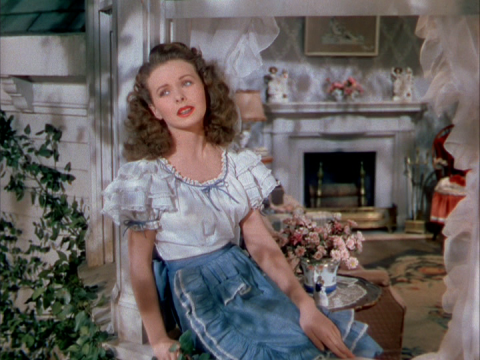 Abel’s friend, Dave Miller (Percy Kilbride) makes a bet with Abel that the family won’t have a good time at the fair, and Abel promises to prove him wrong. That five dollars is going to be his, by hook or by crook.

Once the family arrives at the fair, everyone disperses to their various tasks, and the Frake offspring hit the ground running. While Abel tends to Blue Boy and Melissa sets up camp, Wayne goes off to the ring toss booth. The prizes he won the year before were cheap junk and the barker (Harry Morgan) stiffed him out of eight dollars. Wayne doesn’t miss a single toss, but the barker isn’t budging.

Lo and behold, a mysterious lady claiming to be the daughter of the local police chief steps into remind this charlatan that Wayne can have the guy’s booth closed if he doesn’t pay up, and the barker finally caves.

Only this lady isn’t the police chief’s daughter. She’s Emily Edwards (Vivian Blaine), featured singer in Tommy Thomas’s orchestra. Wayne is immediately smitten and spends his days hanging around the stage door waiting to see her between numbers.

Meanwhile, when Margy takes a ride on the roller coaster, she finds herself in the arms of Pat (Dana Andrews), a journalist who’s covering the fair. Pat is a savvy man about town, and Margy is dazzled. She falls in love right away. Pat is kind of a rolling stone, though, and he tells Margy that when he’s done he just won’t be there.

However, this is the State Fair, where surprises lurk around every corner. There might be more to Emily’s story than she’s letting on, and Pat might not be as much of a rolling stone as he thinks. In the meantime, though, Blue Boy has his big moment, although he needs a gentle nudge or two. Melissa’s pickles and mincemeat wow the judges, one of whom follows Abel and Melissa around the Midway the night after the domestic arts competition. 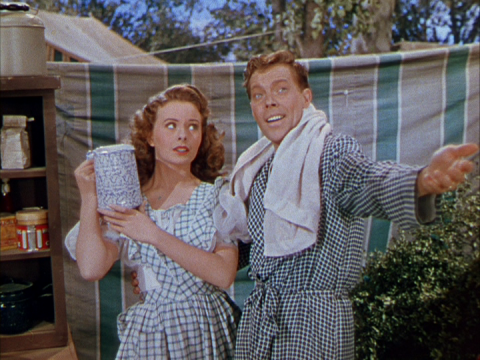 State Fair was a remake of a 1933 movie starring Will Rogers as Abel and Janet Gaynor as Margy, with Lew Ayres as Pat. The earlier film was very much of the Depression era, but it hit all the familiar story points. The Frakes head to the Iowa state fair, where Abel’s Blue Boy and Melissa’s mincemeat are competitors, Margy meets Pat, Wayne meets Emily, and an exciting time is had by all.

The film was pretty racy, with Wayne and Emily having…ahem…an encounter, only indicated by a negligee draped over a chair. Twentieth Century Fox tried to downplay this aspect of the story as much as possible, because a Will Rogers movie had to be squeaky clean. The public bought it, though. According to the American Film Institute, State Fair was incredibly popular and nominated for two Oscars (Watch the film here). 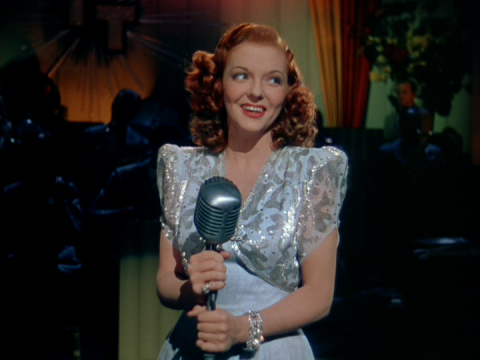 Hollywood being Hollywood, it was only a matter of time before State Fair was tapped for remaking, only this time there would be music. The 1945 version is unique because it’s the only Rogers and Hammerstein score that wasn’t originally written for the stage. At that time, they were fresh off of their success with Oklahoma! and approached by Darryl Zanuck to write a screen musical. Knowing Hollywood’s reputation with Broadway composers and songwriters, Rodgers and Hammerstein agreed, with the proviso that they could work from the East Coast.

What’s wonderful about the music is its themes of innocence and love for home, as well as taking pleasure in little things such as birds singing. Music historians have marveled that Rodgers and Hammerstein were able to write descriptions of Iowa in their music, namely in the song, “All I Owe Ioway,” despite not having been there.

Every member of the cast seemed to be enjoying themselves, but naturally the relationship between Emily and Wayne had to be presented as subtly as possible due to the Production Code. The Hayes office rejected two scripts before finally settling on the one that made it into the film; even then, it’s pretty obvious what Wayne and Emily are doing off-camera. Still, it’s subtle enough that it’ll go right over the heads of younger viewers.

State Fair was successful, opening with what Box Office Digest called “an 181% average,” meaning the film exceeded industry expectations. The film also inspired an uptick in state fair attendance, which no doubt made a lot of people smile all the way to the bank.

The critics, of course, weren’t as easily charmed. Variety essentially said the movie was nothing special but the music was “whammo.” Bosley Crowther called the film “average,” though he charitably chalked it up to “the Hollywood stencil.” However, the years have been kind to this version of State Fair. The film is just plain enjoyable, and even in its darker moments gives a lot of hope. This prompted Twentieth Century Fox to remake the film again almost two decades later, but we’ll go into that tomorrow.

That wraps up Day Two, and I hope you’ll join me Saturday for our next trip to the State Fair. Thanks for reading, all…

State Fair is available on DVD from Amazon.

2 thoughts on “For Your Entertainment”