In 1944 Americans and everyone around the world were weary of war. There was a desire for simpler, happier times, when nothing very big or exciting happened. Hollywood fed into this with movies such as Meet Me In St. Louis, a gentle story about the Smith family as they wait for the Louisiana Purchase Exposition, or th 1904 World’s Fair to open. The movie is presented in seasons, all tied together by an underlying theme: There’s no place like home.

Calamity strikes when the father, Lon (Leon Ames) may take a job in New York. Suddenly, the family’s days in St. Louis are numbered. In the meantime, the oldest girls, Esther (Judy Garland) and Rose (Lucille Bremer) juggle their emerging emotions, with Esther in particular pining for John Truett (Tom Drake), the boy next door.

The script was based on a series of stories by Sally Benson, a New York transplant who originally lived in St. Louis. The stories were very personal to Sally, whose parents were Lon and Anna just like Lon and Anna in the film. She had sisters named Agnes, Esther, and Rose, as well as an older brother also named Lon. Sally was the ‘Tootie” of the book and the de facto main character. They all lived in a comfortable brick house on Kensington Avenue. The biggest difference between the book and real life is that Sally didn’t move to New York until 1909.

Meet Me In St. Louis inevitably comes up when discussing Judy Garland’s career, and no one’s ever quite indifferent to it once they’ve seen it–it’s either delightful or tooth-cloyingly sweet. Still, it’s commonly regarded as a classic. If anyone hasn’t seen this film, here are a few reasons to consider giving it a go:

It has awesome music.

The film is a wonderful mix of tunes from the turn of the twentieth century and originals by Ralph Blaine and Hugh Martin. It’s technically not an integrated musical because the songs don’t move the plot forward, but their placement is so natural that the whole thing flows.

One of the especial standouts is “Have Yourself A Merry Little Christmas.” Like “White Christmas,” it wasn’t thought of as a Christmas song during the Second World War, but more of a looking-ahead sort of thing. The song almost didn’t make it off the drawing board as Martin’s original lyrics were rather depressing. Fortunately for history, good sense prevailed.

The production design is amazing. 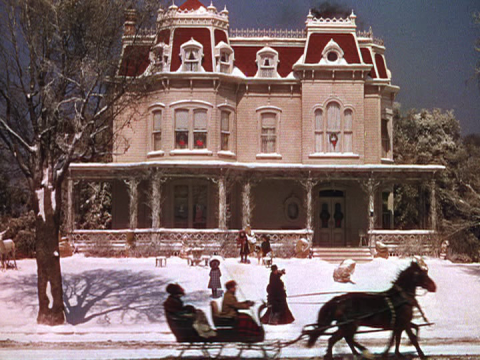 Every part of the film looks sumptuous, from expansive Kensington Avenue with its palatial Victorian houses to the gracious interior of the Smith abode. The colors are bright, the look is clean, and there’s a real feeling of space and air. It also appears believably Victorian and Edwardian, albeit idealized.

What’s really amazing is that parts of the illusion were improvised. Since it was late in the war, raw materials were being conserved and studios were subject to shortages like everyone else. Meet Me In St. Louis was no different–rumor has it that Mary Astor’s dress in the final scenes was made out of lace doilies.

Judy was initially reluctant to take the role of Esther. She was 22 in 1943 and tired of playing younger characters. However, producer Irving Brecher talked her into it and Judy had a great time. She’s presented beautifully in the film, usually framed in a doorway, a window, or sometimes in a crowd of people, such as in “The Trolley Song” scene.

Meet Me In St. Louis was when Judy met Vincente Minnelli, and the two of them butted heads at first because Vincente insisted on rehearsing scenes. This annoyed Judy to no end, but we all know where she and Vincente ended up.

It’s an homage to a time gone by.

Obviously, St. Louis has changed a lot since Sally Benson lived there, even since Meet Me In St. Louis was made. Kensington Avenue still exists, but the area has become very seedy and many of the Victorian houses stand empty. Sally Benson’s own house at 5135 was torn down in 1994. 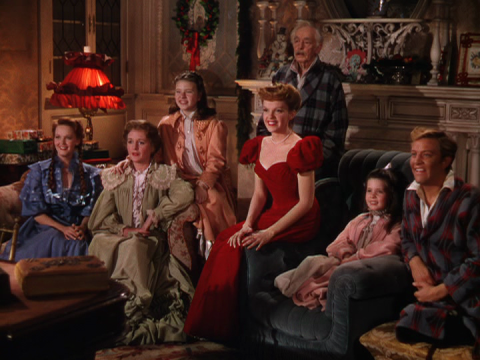 The Smith family’s world is one of cribbage games and hickory nut cake, singing at the piano and making bonfires on Halloween night. They enjoy each other, they spar with each other, and they always have each other’s backs. For families that were separated by war, this dynamic felt like a warm blanket.

It still feels that way today for audiences who may be separated from family and friends for whatever reason. Or maybe the film presents something to aspire to. Either way, Meet Me In St. Louis allows viewers to live in a world that is partly real, partly fantasy, and altogether sentimental and inviting.

The fair, of course. 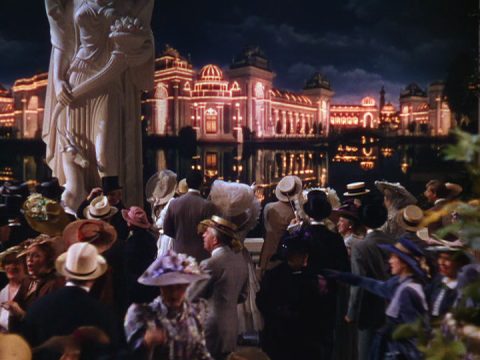 And what of the fair everyone’s been singing about? Everything in Meet Me In St. Louis leads up to it, and we get to see a nice little glimpse before the ending credits. The sights are so enthralling that Grandpa promises a breathless Tootie that the Fair will never be torn down, ever.

If photos from the time are any indicator, the real World’s Fair was a spectacular event. Among the plethora of attractions was a palace made out of corn, an elephant made out of almonds, a fun house, and a recreation of the Austrian Tyrol. Many exhibitions featured people brought in from all over the world.

Despite Grandpa’s promise to Tootie, the buildings constructed for the World’s Fair are mostly gone except for a very few relics. Still, the Louisiana Purchase Exposition is a big part of St. Louis history to this day.

No matter where viewers’ opinions land, Meet Me In St. Louis is memorable, even if people just watch it to get to the fair.

Speaking of which, the second review in our Five Days At the Fair series is on the way tomorrow, and (spoiler alert), it’s another wartime musical. Thanks for reading, all, and hope to see you tomorrow…

Meet Me In St. Louis is available on DVD and Blu-ray from Amazon.

6 thoughts on “Six Reasons To See “Meet Me In St. Louis””