As the saying goes, you never really know someone until you climb in his shoes and walk around in them. Lately I’ve been walking with John Steinbeck, one of my favorite authors (and a fellow Californian), in Susan Shillinglaw’s A Journey Into Steinbeck’s California. Far from being a simple tour guide of Steinbeck haunts, Journey is a detailed biography with a ton of photographs, anecdotes and facts about how these places have changed over the years.

Since the book is so substantial, it’s easier to just give a few highlights. A whistle-whetting, as it were. Off we go, friends…

The book emphasizes how crowded with history John Steinbeck’s childhood was. Born in Salinas in 1902, Steinbeck was surrounded by stories of Mexican settlers to California and the farmers who worked the land. He heard about industrious people who came to make their fortune and stayed to make California their home. All of this excited the mind of a boy who decided very early on that he wanted to be a writer.

To this day Steinbeck’s hometown is immensely proud of him. His family’s home has been a restaurant since 1974 and the town boasts the fascinating National Steinbeck Center, which curates a substantial archive of all things Steinbeck. Among the first editions, correspondence, and other artifacts, the collection houses Steinbeck’s trusty camper, Rocinante.

When it came time to go to college, Steinbeck headed to Stanford, where he took classes off and on for about six years starting in 1919. Steinbeck met Ed Ricketts there, as well Carlton Sheffield, or “Dook,” as he was known. While university didn’t do him any harm, and he did meet professors who inspired him, it seemed to be an exercise in futility. Steinbeck didn’t need help learning to write; like Christian Bale learning to act in front of the camera, Steinbeck needed to get out and live in the world before he could write about it. Even though he left Stanford without a degree, the university hosts the John Steinbeck Institute every year.

Steinbeck’s next stop was New York, intending to make his living there, but he didn’t stay long because it was a huge shock for him. He didn’t like the chaotic pace and it ended up wearing him out. Steinbeck was back in California pretty quickly, and chose to decompress in Lake Tahoe (Placer County represent!).

Steinbeck’s time in Tahoe is mysterious. We know he tutored kids there, and that he drove a bus and worked as a caretaker. He lived in a secluded cabin that was only accessible by boat, and to this day the family that owns it doesn’t allow pictures or visitors because they want to preserve the peaceful setting. Steinbeck’s parents would send him food, but he drew the line at money because he wanted to grow up. We also know he met his first wife Carol while in Tahoe.

Steinbeck threw himself into writing, committing to penning a certain number of pages a day. In Tahoe he wrote his first book, Cup of Gold, published in 1928. He later regarded the book as an utter piece of trash, but it got him in the door, anyway. 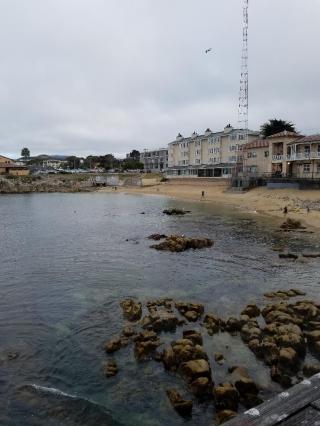 My favorite sections in the book, and the most substantial ones, are about Steinbeck’s time in Monterey and the surrounding area, particularly Cannery Row. The book takes us to every one of Steinbeck’s haunts, as well as his houses in Pacific Grove, one of which he lived regularly from 1930 until 1936. He kept the house, which is currently owned by his sister, Elizabeth’s descendants. Steinbeck’s other Pacific Grove house was bought as a writer’s retreat and is now a private residence.

This Monterey area is where Steinbeck drew most of his inspiration from. He loved the raw, vital energy that is the Monterey Bay, and it’s easy to see why–there’s a tang to the atmosphere that isn’t found anywhere else. Cannery Row is one of my favorite places ever, and while it seems a bit touristy nowadays there’s still so much character and flavor to it. It’s easy to picture Steinbeck strolling down the narrow streets on his way to see his fisherman friends and all the characters who lived down there.

Or to imagine his best friend, Ed Ricketts collecting samples in his little rowboat. Rickett’s residence and workplace, Pacific Biological Laboratories, is still open on select days for tours, parties and other events, albeit much less raucous than the one Mack threw for Doc in the Row’s namesake novel. Steinbeck captured Rickett’s home so well that even if one is new to Cannery Row, the Laboratory will feel familiar.

On a side note, what I like best is McAbee Beach, a magical little strip behind all the tourist buildings, past all the restaurants. The sand is light and velvety and the water is warm and clear. I don’t know what it is about this place, but when I leave it I can’t wait to go back.

Now, Steinbeck wasn’t always the nicest fella. His kids remember him as being self-absorbed but having his good dad moments. His second wife, Gwyn, who called him drunken, abusive, selfish and controlling, stunned him one night at a dance by whispering in his ear that she wanted a divorce.

One of the issues she took with him was that they were constantly moving house, and they always went where Steinbeck wanted to go. They lived in Los Gatos, Mexico, and Palo Alto, the latter of which is where Steinbeck wrote The Grapes of Wrath.

For a big chunk of his later life until he settled in New York and Sag Harbor, Steinbeck’s life was about staying ahead of a world that suddenly wanted to know all about him. Journey mentions that he didn’t grant many interviews and tried to keep busy with various hobbies, such as flying lessons.

The last part of Shillinglaw’s book is a whirlwind, but she handles Steinbeck’s life with a lot of thoughtfulness and interest, with attention to why Steinbeck wrote the way he did. I’ve only given the barest taste of what’s on offer there, because like Steinbeck’s novels, it needs to be discovered. It’s just that fascinating.

Ever seen Singin’ In the Rain? Or not? On Friday we’ll be looking at why this film is a must for any film buff, even those who don’t normally go for musicals. Thanks for reading, all, and hope to see you in a couple of days…