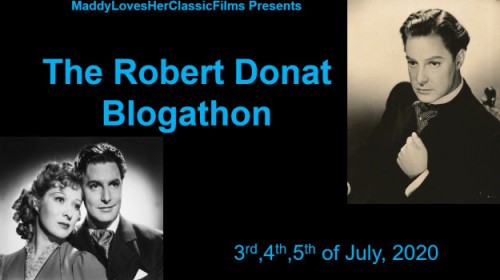 I was going to review The Magic Box for Maddy’s ‘thon, but Amazon un-Primed it, so it’s getting saved for later. Plan B was 1943’s The Adventures of Tartu, an intriguing though very rough-around-the-edges tale of espionage and near-romance. I had no idea what to expect going in, but I figured I’d give Tartu a chance.

Oh, and does anyone else have the urge to say “Tartar” instead of “Tartu” when talking about this movie? I do. I don’t mean to. Writing about Tartar…er, Tartu doesn’t let me off the hook, either. Groan. Moving on…

Captain Terence Stevenson (Robert Donat) is an ace at diffusing bombs, but his commanding officer has bigger ideas for him. Since Romanian-born Brit Terence has lived in Germany and speaks the language fluently, he’s been picked to infiltrate occupied Czechoslovakia and sabotage this new gas the Germans are cooking up. He’ll be posing as Jan Tartu, a chemist and captain who conveniently looks just like Terence. Terence has no experience in spy work or covert operations, but it’s all good. He’s got a working knowledge of chemistry and is a shoo-in for this assignment.

Tartar, er, Tartu, er, Terence infiltrates his way into Czechoslovakia pretty easily, where he immediately makes contact with his connection to the Underground, who, unfortunately, is arrested. Terence doesn’t waste any time falling in with the local Nazis, either, who, once they find out who he is, buy him as Tartu and get him a uniform, plus a job supervising the shift workers at the gas factory. He’s good at playing the part of the loyal Nazi, “Heil”-ing and enthusiastically accepting whatever his fellow officers tell him because he’s all in for Der Fuhrer.

Lodgings must be secured, and Terence gets put up in a nice boardinghouse. It doesn’t have any rooms free, but Inspector Otto Vogel (Walter Rilla) has a solution: The landlady, Anna (Phyllis Morris) can sleep in the kitchen while Tartu takes her room. After Vogel leaves, Terence tells her he’ll sleep in the kitchen. It’s much easier for entertaining the ladies, he says. 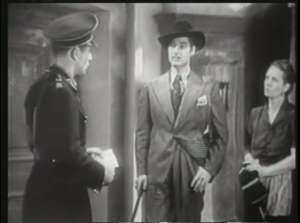 Funny thing about being in the kitchen–there are a lot of secrets to be had. Anna’s young daughter, Pavla (Glynis Johns) turns out to be a member of the Underground. The first time Terence sees her, she’s just come in after killing a Nazi officer. Terence comes clean with both Anna and Pavla as soon as the coast seems clear.

Apparently the boardinghouse is a hotbed for Underground folks, because there’s a lady named Maruschuka Lanova (Valerie Hobson) who’s a bit of a diva. She makes Pavla wait on her hand and foot and is extremely picky. Her room looks like Greta Garbo’s boudoir, complete with divan and fluffy curtains. Maruschuka finds Terence intriguing and sticks as close to him as she can. Terence doesn’t mind; in fact, he asks her to dinner.

Oh yeah, and we can’t forget why Terence is behind enemy lines in the first place. The gas factory is run so strictly that anyone who’s suspected of sabotage is questioned and then taken outside and shot. Terence goes along with the protocol, but his resolve is tested when Pavla is caught sneaking something in a little white bag onto the factory floor. She begs Terence not to give himself away and ends up being shot herself.

Our hero has to watch himself, because there’s the possibility that Maruschuka is a double agent. She’s been meeting with Vogel and not only pretending to be in love with him, but she’s feeding Vogel information about Terence being a spy.

Terence finally makes contact with the Underground but through no doing of his own; one night he gets very drunk and chatty in a bar that just happens to be full of Resistance fighters. They carry him down to their hideout and once Terence comes around they find out all about him. It couldn’t happen at a better time, because Terence as Tartu has finally managed to get a transfer to the gas production facility he’s supposed to be sabotaging. The place is very futuristic and Deco-looking, with stainless-steel elevators and long concrete tunnels.

Donat looked like he was having fun here, but overall, the movie is pretty weak. Writer John Lee Mahin was obviously having an off-day when he wrote Tartu, because it’s poorly paced. Terence doesn’t meet the Underground until the last third of the movie, and then the film barrels to its inevitable conclusion. Choppy editing and huge plot holes make for a sloppy end product. Terence’s relationship with Maruschuka seems tacked on as well–there doesn’t seem to be much reason for the character to exist except as a potential pitfall for Terence.

The sound was lackluster as well. Those concrete tunnels Terence has to work in sounded like they had been made out of plywood, which they probably were. I found the dialogue hard to understand too, and kept having to fiddle with the volume button on my remote. The film is clearly in public domain which usually translates to dismal film quality. It’s highly likely no prints survive, either–Amazon literally got the transfer from a TV broadcast, probably from the eighties. It even has a text overlay saying, “In Stereo Where Available” during the opening credits. Come on, Amazon…really?

On the other hand, Tartu wasn’t all that well-received when it was in theaters. Other than praise for Robert Donat, reviews at the time of release were mixed–the Motion Picture Daily, for instance, called Tartu “interesting” but the New York Times said the film “places a strain on the audience’s credulity.” They weren’t wrong. Audiences seemed to smell a turkey, which is why Tartu’s box office returns were mediocre to lousy.

Even TCM only gives Tartu faint praise, and that’s saying something. Now, the film does have some value as it portrays what slave labor was like in occupied Europe, as well as being a wartime novelty, but that’s about all that’s going on here. While I’m not sorry I watched Tartu, I still would have preferred The Magic Box.

For more of the wonderful Robert Donat, please feel free to pay Maddy at Maddy Loves Her Classic Films a visit. Thanks for reading, all, and see you tomorrow…

The Adventures of Tartu is available on DVD on Amazon or free to stream for Prime customers.

6 thoughts on “A Tartu By Any Other Name”

Melissa Muller presents a very full and fascinating look at Anne Frank, her family, and the time in which she lived. If you read any biography about the famed diarist, read this one. And maybe read it again because it’s that good.

Speakeasy - a movie blog
The Wonderful World of Cinema