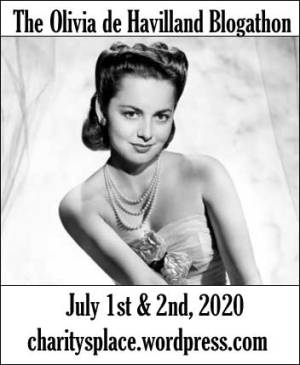 Ms. de Havilland is back…

In the nineteen-fifties, Olivia de Havilland was married and living in Paris with her husband and two children, but she still made films now and then. In 1958 she starred in The Proud Rebel opposite Alan Ladd. A somewhat gentle story for a western, the film follows a Confederate veteran as he seeks a cure for his traumatized son’s muteness. De Havilland was no stranger to westerns, having made four of them, and she was no stranger to Proud Rebel’s director, Michael Curtiz, either, having worked with him nine times. The Proud Rebel was the last film the two of them would make together.

The film begins on an open road, where John Chandler (Alan Ladd) and his son, David (David Ladd) are on their way to the nearest town. David is mute because he saw his mother die in a fire, and they need to see a doctor who can tell them how to cure David. John is a rather reticent fellow who doesn’t like it when people ask too many questions, but he’s a loving father and a good guy.

John also doesn’t like being messed with. After seeing the town doctor, a kindly Quaker named Enos Davis, John and David are in the general store buying groceries when a local sheep rancher, Jeb Burleigh (Ward Bond), and his two sons, Jeb (Harry Dean Stanton) and Tom (Tom Pittman), try stealing Lance, the Chandlers’ sheep dog. They also try to rough up David, which really gets John’s ire up. Long story short, Jeb not only lays John flat, but pours whiskey on him and tells the sheriff John was drunk.

Help comes in the form of Linett Morse (Olivia de Havilland), who rides into town for supplies just as John is taken into custody. She’s an older single lady and very sympathetic, so she figures out what’s going on pretty quickly and drives David to the courthouse, where she volunteers to pay John’s fine of thirty dollars. Since John has no money, just barter, Linett tells him he can come work on her farm. She’s been used to doing everything herself, but it’s tough going and she can use extra hands. 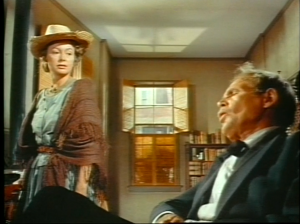 John and David settle in nicely, and John gets to work plowing the fields and fixing up the old, decrepit barn. David thrives, helping paint signs and taking care of the animals. Linnet reads to him at night and cares for him like a mother. In fact, all three of them become a family very quickly, and this is usually indicated by shots of Linnett watching John and smiling.

Life doesn’t stay tranquil, though. The Burleighs are always lurking around, usually with their giant sheep herd in tow. After the Chandlers, assisted by Lance, keep the Burleighs’ sheep from crossing over Linnett’s land, these little weasels have it in for Linnett. They set fire to her barn and are otherwise general pests. What’s more, the Burleighs want Linett’s land, and they don’t care how they get it. 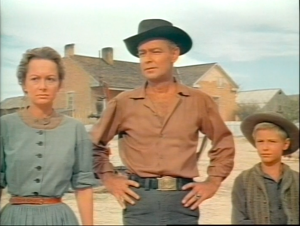 Then there’s the pressing problem of David’s muteness. Dr. Davis gets a letter from another doctor in Minnesota that says an operation might cure David, but the trip plus the operation are going to cost three hundred dollars. Even though he knows David won’t be happy about it, John sells Lance to a dog trainer in town and sends David off to Minnesota with Linnett. David’s operation has about a fifty-fifty chance of success, and even then it might be touch and go.

Since The Proud Rebel is a western, there will be a showdown with reckoning galore, and there may or may not be a sunset to walk into before the credits roll. It’s a very simple story with not a lot of explosive scenes, but it has nice moments and likeable characters. Well, except for the Burleighs. 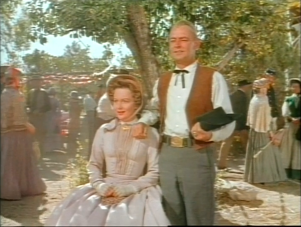 The film was commonly referred to as “modest” at the time of release, and it isn’t hard to figure out why. According to de Havilland biographer Victoria Amador, the film’s tension comes from the story being set right after the end of the Civil War, when there was still tension between the North and the South. However, the story isn’t really affected by it; it’s just something that could be an issue but never is.

Olivia’s participation in The Proud Rebel was very realistic, starting with her negotiating her contract herself. She was forty-one when she worked on the film and she made no effort to hide her age, wearing little to no makeup onscreen. She also did a lot of her own stunts, riding horses and working the farm equipment as much as she could. The result is a gutsy and unpretentious performance that’s ably matched by Alan Ladd’s John Chandler. Instead of billing and cooing, there were merely what Joan Leslie once called “nods, looks, and glances.” Ladd would become a good friend of de Havilland’s, which would last until his death of a heart attack in 1964. 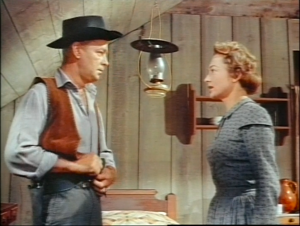 Unfortunately, The Proud Rebel didn’t get the attention it should have due to being overshadowed by that proverbial bird of prey, television. Studios that failed to harness this new medium invariably got left out in the cold. Disney was the exception. Their baby at the time was Old Yeller, and according to TCM, The Proud Rebel just couldn’t compete because Disney had the advantage of promoting all its new films on its TV shows. The Proud Rebel would do well, but not too well, although it got great reviews.

The Proud Rebel may not be a huge sprawling epic, but it’s a quietly diverting movie and a fine example of Olivia de Havilland’s later work.

For more of the great Olivia, please see Charity at Charity’s Place. Thanks for hosting this, Charity–it’s always fun to celebrate such a great actress. Thanks for reading, all, and see you tomorrow with a very special announcement…

The Proud Rebel is available on DVD or to stream on Amazon Prime.