Our first sight after the opening credits is Harry Stockwell singing “The Broadway Melody,” just in case we’ve forgotten what we’re looking at. However, since it’s a new decade and a bigger and better Broadway, we also see Frances Langford singing what would become another classic, “You Are My Lucky Star.” 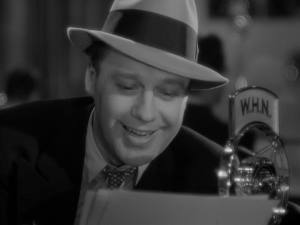 Broadway can wait, though, because gossip columnist, Bert Keeler (Jack Benny) has to save his job. His entire column consists of dishing about which celebs are expecting babies and his boss isn’t happy. Bert needs to dig up the kind of dirt that will get him punched in the nose.

Bert heads out with his buddy, the aptly-named Snoop (Sid Silvers) to see what he can find. Lo and behold, he spies up-and-coming producer, Bob Gordon (Robert Taylor) with the beautiful and deep-pocketed Lillian Brent (June Knight) at a club discussing her possibly backing his new show. Bert’s news nose starts twitching, and he gets to work on his column. Where there’s dirt, there’s more dirt. Soon enough, Bob striding through the newsroom just to deck Bert becomes a frequent occurance.

For his part, Bob’s office sees a lot of foot traffic as well, but instead of people looking to sock him, it’s people looking to get a job in Bob’s show (which happens to be called Broadway Rhythm, natch). One fellow, Dr. Wildhack, is an especial barnacle–he’s always around. His specialty? Snoring. All kinds of snoring. He has names for of them, too. Bert tries to play it cool when he meets him, but he’s clearly weirded out.

One of the hopefuls waiting to see Bob is Irene Foster (Eleanor Powell), his old friend from Albany. They went to high school together, and he gave Irene his fraternity pin. Irene’s anxious to see Bob, and she’s looking to get into show business, although not necessarily in that order. Kitty (Una Merkel), Bob’s secretary, is very friendly and helpful once she hears Irene’s story, and when Bob rushes past Irene on his way into his office, Irene is disappointed, but there’s nothing she can do except come back later.

Irene checks into a boardinghouse, where she meets Ted and Sally Burke (Buddy and Vilma Ebsen), a brother and sister vaudeville act who are in New York to break into the showbiz market. They bond over breakfast and tap dancing, and the Burkes are delighted to find out Irene can imitate Katharine Hepburn’s Eva Lovelace in Morning Glory.

When Ted finds out Irene’s in town, he wants Kitty to find her any way she can. Conveniently enough, Kitty is seeing Snoop, so she asks him to ask Bert to put an item in his column about it. The plan works like a charm, of course. 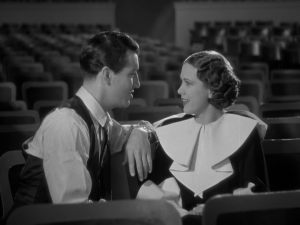 Unfortunately, while Bob is happy to see Irene, he doesn’t want to hire her for his show. Ted and Sally get a job, but Bob thinks Irene should go back to Albany. He’s afraid Broadway will chew her up and spit her out.

Meanwhile, there’s a show to cast, and Bob heads to Hollywood to look for a leading lady. Bert floats the idea of using a French star, La Belle Arlette. She’s a sure bet. He got the name off a cigar box, and he plays Mademoiselle Arlette up to Kitty like she’s a big star. Kitty buys it, though, and as soon as Bob comes back from California she broaches the idea to him. Bert plans on giving Arlette lots of publicity in his column even though she doesn’t exist.

Just in case, Bert and Snoop rent a fancy hotel suite, where the supposed Arlette is supposed to be staying at. Snoop, who can sort of imitate a French accent, is just there to answer the phone, always with the line, “Oui, oui, Mademoiselle Arlette, zhe is veree bizee rehearsing.” A record of “You Are My Lucky Star” sung by a French songstress blares in the background, completing the illusion.

Why Snoop has to answer the phone in full drag is anybody’s guess, but Bob becomes more and more impatient and intrigued. Kitty keeps calling, and inevitably Snoop’s cover gets blown when he says, “Hiya, Kitty!” in his own voice. Kitty goes by the hotel suite, finds the dolled-up Snoop asleep on the setee with a cigar hanging out of his mouth, and sticks a note to his forehead. 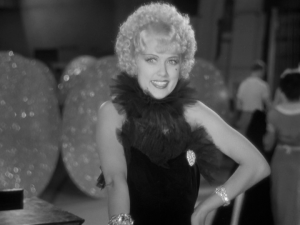 Bob buys the disappointed Irene a ticket back to Albany and puts her on the train himself. However, Kitty has also been charged with producing Mademoiselle Arlette, and who better than the lady Bob has sent home?

Irene as Arlette swans around in a blonde wig and a giant fur stole, and Bob is none the wiser even though it’s totally obvious Arlette is a complete fake. It’s a good thing she’s an amazing dancer, but as always happens in these kinds of stories, the proverbial chickens always come home to the proverbial roost. And as is typical for MGM musicals, there’s a slam-bang finish.

There’s a world of difference between the 1935 Melody and the 1929 one. There’s a lot more music, for one thing, and the technical leaps MGM had taken in six years was staggering. We get composite shots where dancers’ costumes dissolve from one color to another. The camera isn’t fixed to one spot anymore; in fact, it follows Powell and the other dancers as they careen around the set. There are flowers that grow with the flick of a wrist and a fountain that morphs into something to dance on.

Speaking of dancing, Eleanor Powell is a marvel. Broadway Melody was her second movie, and she’s a female Fred Astaire in top hat and tails, only her outfit is fully sequined. Powell was called a “find” by the media of the time and people were agog at her talent. She not only tap dances in the film but tackles ballet en pointe. Powell’s ballet game was definitely not as strong as her tap dancing, but she makes up for it by lithely leaping around and throwing in her trademark rapid-fire turns. 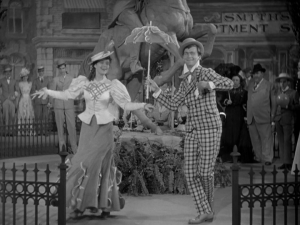 That was what stuck out to audiences and critics–instead of big names, Melody had colossal professionalism. Robert Taylor sang, or tried to. Dancer Nick Long, whose nature name should have been “Kicks High,” whirled around as impressively as Powell did, literally leapfrogging over the dancers as if he had Flubber on his shoes. Buddy and Vilma Ebsen provided what were called “eccentric dances,” which are fun to watch. Unfortunately it was the only time Vilma danced onscreen, as MGM didn’t pick up her contract. Dr. Wildhack’s snoring stuck out as well, which is no shock.

MGM got a lot of mileage out of the music, using “You Are My Lucky Star,” in later films, such as Singin’ In the Rain. Thankfully, they don’t lay on the “Broadway Rhythm” theme too heavily, even if it is a cute number. MGM had learned a few things since 1929.

The movie did tremendously well for MGM and according to TCM, it was one of the top ten films of 1935. It’s surprisingly not as dated as it could be, and there’s a lot of fun to be had, especially in the variety department. It made a star out of Eleanor Powell, who would return to Broadway later in her career, but we’ll get into that tomorrow.

If anyone is in the mood for more Broadway, Day Two’s entries can be found here. Thanks for reading, all, and see you tomorrow with Day Three…

The Broadway Melody of 1936 is available on DVD from Amazon.

5 thoughts on “Back To Broadway”

Todays's Taking Up Room review is the BBC production of "The Mother," starring Anne Bancroft as the title character. It's about coming to terms with aging, both for the older person and their family. Link in bio. #blogsofinstagram #themother #annebancroft #joancusack
Taking Up Room goes to rare book heaven today with a look at the 2020 documentary, "The Booksellers." Anyone who loves books will probably LOVE this film. Link in bio. #blogsofinstagram #thebooksellers #parkerposey #franlebowitz
Taking Up Room is participating in @dellonmovies' Against the Crowd Blogathon, where bloggers tell which popular movies they dislike and which unpopular ones they like. As you can see, I picked "Indiana Jones and the Temple of Doom" and "The Happening," but which movie made which category? Click the link my bio to find out. #blogsofinstagram #thehappening #indianajonesandthetempleofdoom #georgelucas #mnightshyamalan #harrisonford #markwahlberg #katecapshaw #zoedeschanel