How may I serve you?

It’s a pretty good bet that one of the more unusual films to come out of the nineties is 1993’s Benny and Joon. Starring Aiden Quinn, Mary Stuart Masterson, and Johnny Depp, it paints a misty picture of mental illness, romance, quirk, and plain old love of many kinds. The highlight is Johnny Depp, who plays Sam, but we’ll get to that.

After an intriguing opening credit sequence featuring that classic earworm, “500 Miles” (You’re welcome) we see Benny Pearl (Aidan Quinn) who runs a thriving autoshop in Spokane, Washington. He lives with his sister, Juniper (Mary Stuart Masterson), nicknamed Joon. Joon is a highly articulate artist and avid reader who has to be supervised at all times because she hears voices and occasionally lights things on fire. The film never states exactly what her mental illness is, but hearing voices is commonly attributed to bipolar disorder or schizophrenia. Traumatic events can cause people to hear voices as well. Benny and Joon saw their parents die in a car accident when they were kids, so it’s a safe bet Joon may have multiple issues.

Anyway, the Pearls’ latest housekeeper, Mrs. Smail (Eileen Ryan) has quit in frustration because she just can’t deal with Joon’s outbursts. Benny tells Joon she needs to stay close to home until they get a new housekeeper, which Joon doesn’t–she wanders outside carrying a Ping-pong paddle and wearing a snorkel mask, only to be picked up by the police.

Joon’s doctor, Dr. Garvey (C.C.H. Pounder) advises Benny to put Joon in a group home, because she thinks the two of them living together may not be the best thing anymore. She doesn’t handle stress well, and there may be other people who can care for Joon better than Benny. Benny’s friends agree, because they all think Benny is way too stressed himself and could use some space of his own. Joon herself feels like she’s being cheated. 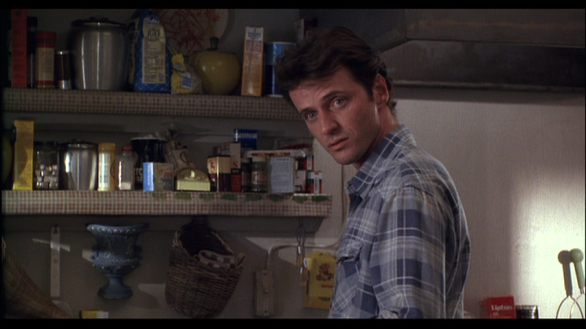 Benny is reluctant to change anything because Joon is his only relative, and he sees putting her in a group home as farming her out. Still, he laments how tied down he is–he can’t even date without worrying about Joon.

Help comes from an unlikely source. Benny and his friends, Eric (Oliver Platt), Thomas (Dan Hedaya), and Mike (Joe Grifasi) meet weekly to play poker, and instead of betting chips, they bet things. A Deanna Durbin album. A barely used soap-on-a-rope. A salad shooter. A Pocket Fisherman. Pretty much anything.

One night, Joon and Thomas play their own round, and the stakes get higher and higher. Thomas finally bets his cousin, Sam, who’s been staying with him and driving him crazy. He’s functionally illiterate, likes watching old movies and polishing plastic forks.

It comes as no shock that Joon loses the hand, and Sam comes home with she and Benny. First off, though, the three of them stop at a diner so Benny can get a beer.

The three of them have no idea what they’re in for. Benny has to explain about Joon’s mental illness, and Sam’s housekeeping methods make Joon nervous at first. He cleans the house by standing on an easy chair and using a mop to reach the high corners of the ceiling. He makes grilled cheese with a clothes iron and mashed potatoes with a tennis racket. Joon kicks him out on the first day, but Sam is a persistent fellow, calmly sitting on a mailbox while he waits for Joon to let him back in.

Joon is every bit as unique, making milkshakes with Peanut Butter Cap’n Crunch, chunky peanut butter, and plenty of milk. Sam is unnerved but polite, taking a big gulp of Joon’s concoction and trying not to cringe too much.

Other than that, Sam and Joon are instant buddies and decide to do a little matchmaking. They make friends with Ruthie (Julianne Moore), a waitress at the diner, bringing her home to dinner. Ruthie’s a former actress who made a single slasher flick, The Prom Queen Mutilator, before heading to Washington to wait tables and manage an apartment building.

Naturally, Benny asks Ruthie out, but even though the date goes swimmingly, Benny’s old blocks are still up. Also naturally, Ruthie doesn’t take it well when Benny tells her his life is complicated.

Speaking of which, Sam and Joon fall in love, which Benny doesn’t take to at all, and everything seems to come crashing down. However, since this is a world where thinking outside the box is the norm, the denouement will be both expected and surprising at the same time.

Whether they like it or not, no one is indifferent to Benny and Joon once they’ve seen the film, probably because people don’t always know what to make of it. That might be because while the movie is filmed at real locations around Spokane, there’s a subliminally dreamlike feeling. Director Jeremiah Cherchik went to great lengths to make the film look not quite real, putting pantyhose over the camera lenses to create a softened effect. 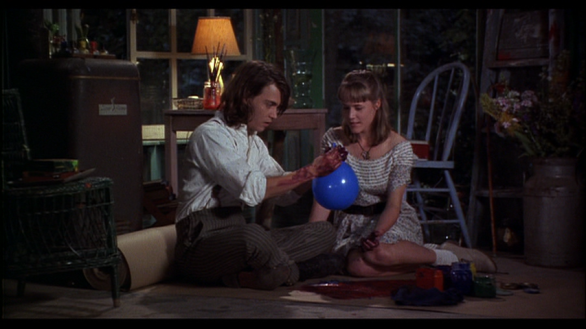 To punctuate the illusion, Johnny Depp channels some greats from the past. As Sam, he does dead-on impressions of Charlie Chaplin and Buster Keaton, only with his own twist–the gags might be straight out of silent cinema, but the face and the bearing are pure Depp. There’s a scene in Spokane’s Riverfront Park where he draws a crowd just by losing his hat:

It might seem strange, but Sam, while just as unconventional as Joon, seems to ground she and Benny just when they’re coming apart. He does what neither Benny or Joon are willing to do, such as cleaning house, and he does it in his own way.

I think that’s one of the reasons the movie works the way it does–Sam pushes these characters out of the status quo and brings an order of sorts, like any good housekeeper. Benny and Joon might be quirky, but it’s purposeful quirk.

For more of the Butlers and Maids Blogathon, which begins on Saturday, please visit Rich at Wide Screen World and Paddy Lee at Caftan Woman. Yeah, I’m getting my post in early because the Second So Bad It’s Good Blogathon is happening tomorrow. Hope you’ll all join us. Thanks for reading…

Benny and Joon is available on DVD and Blu-ray from Amazon.

So glad to be back. 😊 #museumlife #docentlife #iloveplacercounty #exploreauburnca
Remember Alistair Cook? Before he was the elegant host of "Masterpiece Theatre" his main gig was journalism, and Taking Up Room's latest Reading Rarity is a look at Mr. Cooke's wartime travelogue, "The American Hone Front, 1941-1942." Link in bio. #blogsofinstagram #alistaircooke #books #wwii #theamericanhomeftpnt19411942
Going noir on Taking Up Room with the 1941 murder mystery, "I Wake Up Screaming," about a sports promoter accused of murder. And yes, that's Betty Grable. Link in bio. #blogsofinstagram #classichollywood #iwakeupscreaming1941 #bettygrable #victormature💎 #carolelandis #alanmowbray

© Rebecca Deniston and Taking Up Room, 2021. Unauthorized use and/or duplication of this material without express and written permission from this site’s author and owner is strictly prohibited. Excerpts, images and links may be used, provided that full and clear credit is given to Rebecca Deniston and Taking Up Room with appropriate and specific direction to the original content.