Carole Lombard was a successful comedienne, but she was not immune to a movie of hers tanking at the box office. That came in the form of 1939’s Made For Each Other, which starred Carole opposite James Stewart. Produced by David O. Selznik and directed by John Cromwell, it’s an uncomplicated story of a couple, John and Jane Mason, who meet and marry in the blink of an eye.

Manhattanite John (James Stewart) has just come back from a business trip to Boston. He’s secured an ultra-important deposition for his law firm. He’s also gotten married. Everyone at the office seems to know about it already and dumps a bucket of confetti on him as he walks in the door.

Well, not everyone is aware of John’s whirlwind nuptials. He’s got to loudly break the news to his boss, Judge Joseph M. Doolittle (Charles Coburn), who’s a little hard of hearing. Then his mother, Harriet (Lucille Watson) has to be told, and she promptly faints as soon as the words are out. Fortunately, she takes to Jane (Carole Lombard) John’s new wife, right off the bat.

John and Jane are in their stateroom on the Normandie, all set to go on their honeymoon, when one of John’s coworkers, Mr. Carter (Donald Briggs) shows up and tells him the Higgins case has been moved up to Monday. John and Jane are aghast and more than a little ticked off, because they thought John had a month until the case went to trial. Since Higgins is such a big client, there’s nothing for John and Jane to do but watch forlornly from the dock as the Normandie sets sail. John still has the tickets, but whether he ever get to use them remains to be seen.

John and Jane set up housekeeping in a nice two-bedroom apartment with Harriet, who has plenty to say about Jane’s housekeeper, Annie (Esther Dale). She plagues Annie so much about the food for the dinner party John and Jane are hosting that Annie quits. Our couple have to talk fast to get her to stay at least through dinner, because Judge Doolittle is going to be there and he’s going to announce who made partner at the law firm. Spoiler alert: Doolittle picks Carter instead. John proposes a toast, but they’ve run out of wine and Annie has gone off in a huff. Derp. 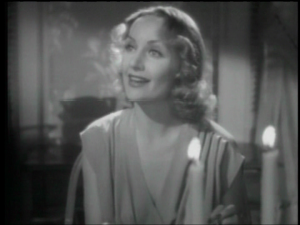 Things begin to snowball for our couple, as John is a shining star in the Higgins case and Jane learns she’s pregnant. Before she knows it, it’s time to deliver and they have a son, Johnny Jr. He’s got to sleep in the dining room at night due to the cramped quarters, but John and Jane are enraptured. Harriet hovers and offers too much advice. Everyone grins and bears it, though, because it’s only a matter of time before they can get a bigger apartment. Jane wants John to demand a raise.

Yeah, not so fast, people. Because of the Depression, everyone is tightening their belts, including John’s law firm clients, and the judge tells everyone they’re going to get a twenty-five percent paycut. No one is safe, not even the judge himself. John is devastated and goes home drunk. 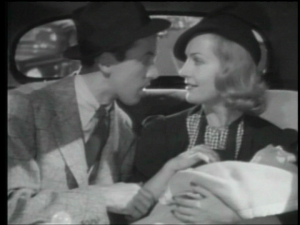 After this, the bills begin piling up, so Jane looks for work. We don’t know if she ever finds any, but at least they’ve finally hired a good maid, Lily (Louise Beavers), who happily stays on even at reduced wages. She doesn’t care about less money; she just wants to take care of the Masons, she loves playing with Johnny, and she gives great neck rubs.

John and Jane are so unhappy about their current circumstances that Johnny wonders if getting married and having Johnny Jr. was a mistake. As the plot would have it, though, Johnny Jr. contracts pneumonia which can only be cured by a special serum. All of the Masons’ marital troubles are shoved aside as they pray and hope for their son’s recovery, which looks increasingly doubtful. Getting the cure hinges on a brave pilot, Conway (Eddie Quillan) flying the serum out from Salt Lake City in a blinding snowstorm.

If anyone watching this movie misses the opening credits, they would likely never know they were watching a Selznik product. The production values are very low, the story is sometimes a hodgepodge, and none of it seems to bear that trademark Selznik stamp. There’s no overture, the scenes are mostly empty of extras, and no one talks over anyone.

There’s an excellent explanation for this, however: Made For Each Other was produced concurrently with Gone With the Wind, so one guess as to which basket Selznik was putting more eggs into. Plus, since Carole Lombard was a firmly established star, and James Stewart was on the rise, the film could be done cheaply and quickly without upsetting work on the prestige picture. According to TCM, director John Cromwell was pretty much left alone.

Unfortunately, the movie flopped at its test screening, so Selznik went back to the cutting room and edited, adding the segment about Johnny’s pneumonia at the last minute. That’s why the final third of the movie seems tacked on. Cromwell hated that the pneumonia angle was in there at all, but Selznik argued that his brother was miraculously saved in a similar situation.

Despite the last minute changes, the movie was loved by the critics and passed over by the public, although the press said differently. Well, except for Life Magazine, who declared the era of screwball comedy was officially over the minute Lombard started sobbing hysterically. Fortunately for everyone’s reputations, though, Gone With the Wind stole the spotlight and wouldn’t give it back.

At least the cast enjoyed working together. Stewart marveled at Lombard’s ability to cuss in a ladylike manner, and Lombard marveled at Stewart’s considerable acting talents. That they were thrown together is the result of  Selznik misreading his cast–he thought Lombard would be a lioness to Stewart’s non-entity. Oops. Both stars were disappointed when the film flopped.

Watching Made For Each Other eighty years on, I think 1939 audiences had something. The movie starts out strongly enough, but the pneumonia angle disintegrates the proceedings. While the crisis effectively cements John and Jane’s marriage, they’re already in dire straits because of John’s money troubles, so adding a sick baby feels like dog piling. I don’t know what else Selznik could have done with it, though, because Cromwell’s direction is weak to begin with, and despite confident performances from its leads, the total package lacks bite.

I went from enjoying the movie to shaking my head in disbelief, and I didn’t care for the change. It’s not often movies are made about what happens after the nuptials because “I do” is so often considered to be drama’s zenith. Made For Each Other turns the movie trope of the quick marriage on its head by showing the aftermath. There are nitpicky in-laws, dashed expectations, and money troubles, but learning to live together also has its joys. If the movie had stuck to that, and maybe shown the character arc simply turning around to something positive, the end result might have been more successful though still low-key. We’ll never know, though, because Made For Each Other will forever be overshadowed by the banner year that was 1939.

For more of the great Carole Lombard, please feel free to see Crystal at In the Good Old Days of Classic Hollywood and Vincent at Carole & Co. Thanks for hosting, Crystal and Vincent–I always like our visits with Miss Carole. Thanks for reading, everyone, and see you next week with another Reading Rarity…

Made For Each Other is available on DVD and Blu-ray from Amazon.

3 thoughts on “After Happily Ever After”

Ever wondered what it was like to live in the Victorian era? Author Judith Flanders takes us through the typical nineteenth-century house, room by room, stick of furniture by stick of furniture. Literally everything is here, including the kitchen sink, and it’s all fascinating.

We've been having a blast at the Second So Bad It's Good Blogathon, which is now in its third and final day. Have you seen all our great entries yet? Link in bio. #blogsofinstagram #sobaditsgoodblogathon #attackofthemushroompeople #titanicii
The Second So Bad It's Good Blogathon is live, y'all, and we're really bringing the flinch this weekend. Click the link in my bio to read some delightful reviews of some laughingly awful movies (including my take on 1984's "Supergirl). #blogsofinstagram #blogathons #sobaditsgoodblogathon #supergirl #helenslater #fayedunaway #peterotoole
It's a little bit later than when I usually post stuff like this, but tomorrow is going to be crazy. So, here's 1993's "Benny and Joon," an offbeat romcom starring Johnny Depp, Mary Stuart Masterson, and Aidan Quinn. Link in bio. #blogsofinstagram #bennyandjoon #johnnydepp #marystuartmasterson #aidanquinn