One of my all-time favorite holiday movies is 1995’s While You Were Sleeping. I remember when this came out my guy friends were telling me I should go see it. Guys and rom-coms don’t always mix, but the film is such a fun one anyone can talk about it and not lose street cred. Those who know Sandra Bullock best from her current thriller streak (Birdbox, anyone?) may not remember her days as a rom-com sweetheart, but it’s how a lot of us first met her. Bullock starring in the film almost didn’t happen, and While You Were Sleeping came very close to being something other than what we know today.

The movie is set in Chicago, and it opens with Lucy’s (Sandra Bullock) reminisces about her dad and how he knew he loved her mom. She gave him the world–well, a globe with a light in it, but it was the world all the same.

Now Lucy’s dad has passed away. She lives alone with her cat and works at a tollbooth at the now-demolished Randolph/Wabash El station. It’s not all bad, though, because Destiny, er, A Devastatingly Handsome Guy passes through her turnstyle every day to catch the 8:15 train. Lucy looks forward to seeing him and dreams about talking to him. Who knows, maybe he’ll be her Prince Charming. 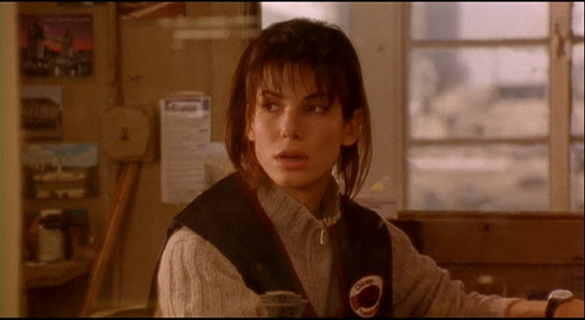 Since Lucy doesn’t have any family left, she works every holiday. Christmas is approaching and Lucy wants the day off for once, but her boss, Jerry (Jason Bernard) talks her into it since everyone else is busy.

Christmas Day arrives and Lucy sits dutifully in her booth with a cup of coffee and a tiny Christmas tree. Prince Charming comes through just like any other day, only this time he wishes Lucy a merry Christmas. Unfortunately, Lucy can only stammer. 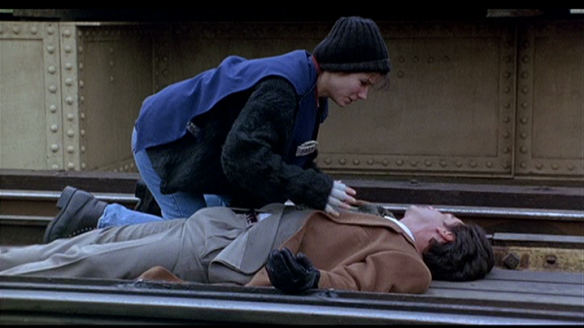 While Lucy’s busy kicking herself, Prince Charming gets mugged on the platform by two fellas who, for some reason, only make off with his red cashmere scarf. He gets pushed onto the tracks, laying there unconscious while Lucy jumps down to help him. Just in case things aren’t interesting enough, a train comes at them, “an Express,” as Lucy tells Prince Charming’s comatose face. Without really thinking about it, Lucy rolls she and Prince Charming under the station platform, where she gazes at him while the train rolls by.

Prince Charming’s real name is Peter Callaghan (Peter Gallagher), and Lucy goes to the hospital with him. She’s frantic to find out if he’s going to be OK, but she doesn’t know his name, and the staff are quick to tell her that it’s family only. Despondently, Lucy remarks to herself, “I was gonna marry him.”

Overheard by Wanda (Ruth Rudnik), a sympathetic nurse, Lucy finds herself at Peter’s bedside, but she’s not alone with him for long. A police officer comes in to get the details of Peter’s mugging, and then Peter’s family come in, as well as Saul (Jack Warden), an old family friend. These folks seldom enter any scene by themselves, but that’s OK because they’re a loving, close-knit family. When they find out Lucy saved Peter and Wanda says Lucy is his fiancee, the family rush to accept her. They’ve been estranged from Peter, and they’re not only overjoyed to be with him again, but are ecstatic he’s found a nice girl.

Lucy is quick to tell Wanda about the mixup, but before they can really talk about it, Saul comes up looking for nitro pills for the grandmother, Elsie (Glynis Johns). Then our heroine and the family sit around awkwardly and smile at each other for awhile before Lucy goes home. 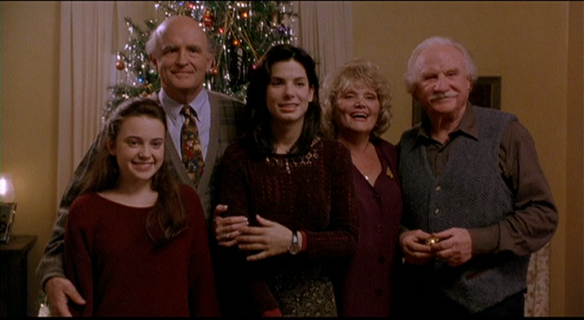 This isn’t the last Lucy sees of the Callaghans, though–they invite her over for Christmas, and it’s all the family life Lucy’s been missing. She’s content to sit back and watch them interact with each other.

Speaking of interactions, Peter’s brother, Jack (Bill Pullman) shows up, giving Lucy six degrees of confused longing. There’s also the landlord’s son, Joe Jr. (Michael Rispoli) who holds out Ice Capades tickets and deludes himself into thinking he and Lucy are dating. Peter’s tony North Lake Shore Drive apartment makes an appearance, as well as a cat none of the Callaghans know about. There are more misunderstandings, more twists, and more familial moments, and that’s all before Peter wakes up from his coma. 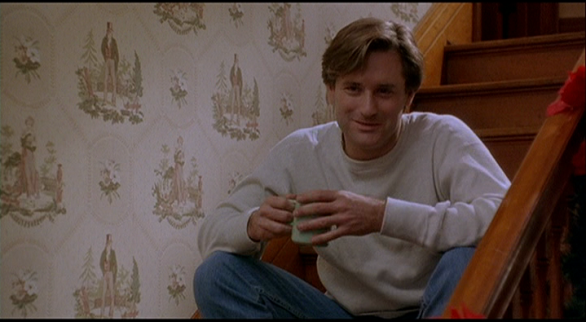 Ooh, did I give something away? Sowwy. *impish chuckle* 😉

This isn’t a movie that is remembered for its innovative camera work and artsy touches. It doesn’t get all deep and symbolic, either. Rather, it’s filmed simply, using real locations in and around the Chicago area, which allows the film to breathe and makes Chicago another character in the movie.

The story is an effective bait-and-switch all the way through–just when it seems Lucy’s going to be found out, something happens that makes her supposed relationship with Peter look legit. She’s torn between wanting to be truthful, not wanting to hurt the family, and not wanting to be alone anymore. It takes some quick thinking and Jed mind-tricks, but Lucy has to come out a winner somehow.

Sandra Bullock’s chemistry with Bill Pullman is a lot of fun, and what’s kind of amazing is that the two of them almost didn’t get these roles. The part of Lucy was sought after by Nicole Kidman and Demi Moore, it was turned down by Julia Roberts and Geena Davis, and almost given to Jamie Gertz. According to IMDb, Bullock won out because she could relate to Lucy, having just come out of a long-term relationship.

Casting the part of Jack was a bigger contest. Matthew McConaughey auditioned, but his Texas accent put him out of the running. Dennis Quaid, Pierce Brosnan, Harrison Ford, Dylan McDermott, Patrick Swayze, and James Spader were also floated as would-be players, which is kind of ludicrous to think about now, because it’s impossible to see anyone but Bill Pullman as Jack. He’s ruggedly goofy and brings a touch of tension to the story, because he’s the only one who doesn’t accept Lucy being engaged to Peter. First of all, Jack likes her too much, and secondly, he knows his brother. It all works. The New York Times felt the same way–they said that Pullman and Bullock “shot enough sparks to melt snow.” 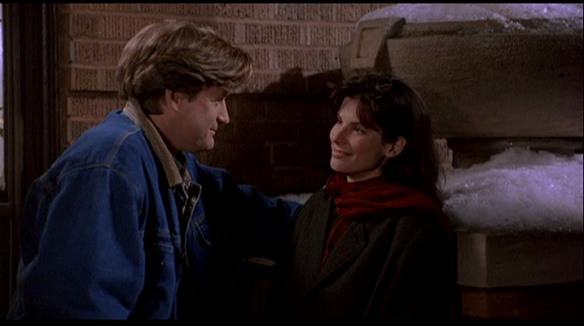 While You Were Sleeping could have been a far different film than it was, even beyond casting. The original premise was a guy in love with a girl in a coma, but the roles were reversed because it seemed less creepy. It wasn’t supposed to be a holiday movie, but it was made one because it was thought more of the public would take to it. It wasn’t even set in Chicago at first, but Brooklyn, and for whatever reason it was moved to the Windy City.

If any of these earlier ideas had stuck, who knows what people would think of the film nowadays. As it is, it’s a classic, fun story that anyone can enjoy, even guys who are usually “Too Cool For Rom-Coms.” 🙂

More Christmas stuff is coming up tomorrow, and it’ll be of a princely persuasion. Thanks for reading, all…

While You Were Sleeping is available on DVD and Blu-ray from Amazon.