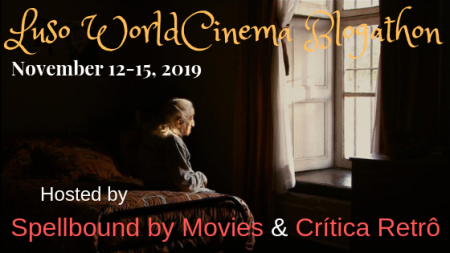 The fifties are somewhere we’ve all been to in terms of Hollywood movies, and we know it was an interesting time in the film industry. Big bad television and blacklisting made the studios rather nervous, and subjects that were once avoided now seemed safe. Religion was one of those, and Christian-centered films of various prestiges were released. One of the smaller ones is 1952’s The Miracle of Our Lady of Fatima, a fictionalized telling of the events in the tiny mountain village in 1917.

Portugal is in political turmoil. As of 1910 the socialists have taken over, freedom has been severely restricted, and religious are treated like criminals. Priests and bishops are put in jail and nuns aren’t allowed to wear their habits in the street.

It doesn’t deter the Portuguese people, however, who continue to practice Christianity amid the socialist atmosphere. One Sunday in the village of Fatima, Antonio dos Santos (Jay Novello) and his friend Hugo da Silva (Gilbert Roland) are drinking and scheming in the local bar, when Antonio realizes to his horror that he’s missed Mass. His wife, Maria Rosa (Angela Clarke), comes out of church looking for him and sends her daughters off to do various tasks.

The youngest, Lucia (Susan Whitney), gets the job of taking the sheep to the family pasture, which they call the Cova. Her cousins and best friends, Jacinta (Sherry Jackson) and Francisco (Sammy Ogg) come with, bringing bread and cheese. They’re relaxing and just being kids–actually, Francisco is pinning Jacinta’s apron on a wayward ram–when they suddenly hear thunder and lightning.

Thinking it’s a storm, the kids get the sheep to go home, when Lucia and Jacinta see a lady, but it’s not just any lady. She’s a heavenly creature, and she wants to appear to the kids on the thirteenth day of each month for the next six months. She warns them that they will have to endure a lot of suffering, but there’s also comfort in it for them. She tells the kids to say the Rosary every day to obtain peace for the world. As if to prove her point, Francisco, rascal that he is, can’t see the Lady until he says the Rosary.

Sobered by this latest turn of events, the kids head back into town, where they meet Hugo. Hugo is a charming hustler and sponge the kids are usually glad to see, and they find themselves telling him about the Lady. Thinking they’re talking about a pretty newcomer, Hugo preens, but is floored when the kids tell him their Lady came from heaven. He doesn’t know what to make of it, but takes them seriously when Jacinta starts sobbing. The kids agree that they shouldn’t tell anyone but Hugo.

Problem is, Jacinta can’t keep a secret. She doesn’t even wait until dinnertime before she’s spilling the beans to her parents, Manuel (Norman Rice) and Olimpia (Frances Morris) about the vision. The Martos rush over to the dos Santos house, excited, but they barely have any time to talk about it before they find out all of Fatima knows about it, too.

Maria Rosa is pretty hard on Lucia because she thinks she’s lying, and she and Antonio go to see Father Ferreira (Richard Hale). Father is understandably cautious because he doesn’t want to attract attention from the authorities, so he advises the dos Santos to not encourage anything. He doesn’t want to attract the authorities’ attention, and anyway, St. Anthony’s feast day is coming up, so he thinks the Lady business will die down before then.

Well…a lot can happen in a month. Jacinta and Francisco decide to stay home from the Feast, but Maria Rosa forces Lucia to go. It’s the usual party with dancers and fireworks, plus Father Ferreira blesses the bread for the poor and the children. To Lucia’s dismay, the other kids tease her about the vision, and Administrator Arturo dos Santos (Frank Silvera) rolls in looking for her.

Never fear, though, Hugo is here. He helps Lucia get to the Cova just in time to see the Lady, and no one’s laughing this month. The Lady tells Lucia that she needs to learn to read and write because she’ll have work to do. Lucia is also heartbroken when she finds out Jacinta and Francisco will go to heaven soon. All the crowd can do is sit back in wonder.

That’s par for the course with this film. Every month as the Lady comes back, the crowds grow bigger, and there’s nothing the Magistrate and Administrator can do about it. Not even putting the kids in jail or threatening to boil them in oil can deter them from going to see the Lady. And since the other people can’t see her, the Lady promises to give the crowds a sign.

The Administrator is the unwitting comic relief in this film, because his every mannerism is melodramatic. It’s a wonder he isn’t twirling his mustache and swirling a cape. However, he does literally cower in the corner during the Lady’s sign which is pretty funny. And just in case anyone doesn’t pick up on the boo-hiss aspect of the guy’s character, the music always has this Dun dun dun type of sound whenever he walks into frame.

Hugo is intentionally funny, at least most of the time. He’s a fictional character, probably added because in the midst of all the staunch Catholics, it may have been necessary to have a sympathetic character who needed to take a journey. He’s not super well-developed, but he’s an effective conduit for the audience, and Gilbert Roland was clearly having fun with the part. Especially when Hugo does his usual hustle and sells rosaries and pieces of the Lady’s tree to pilgrims.

Other than a few liberties, the film sticks pretty close to the accepted historical record, although it doesn’t really get into many of the specifics of what the Lady is reported to have said. The two exceptions are where they show the Lady predicting the Second World War and trouble coming out of Russia, both of which would have been very timely for Cold War audiences. It definitely doesn’t go into the three secrets the Seers said they heard and which some Catholics believe still haven’t been revealed.

Since the Fatima visions are historic events, there’s really no way to spoil the outcome of this movie for those who are familiar with it. The sign the Lady promised has come to be known as the Miracle of the Sun. Witnesses saw the sun change positions and some said it looked like it was falling to the earth. The incident was heavily documented by journalists who were present that day, including Portugal’s top newspaper, O Seculo and observed from forty miles away.

The three Seers, as they’re sometimes called, go on to have futures according to what the Lady predicted. Jacinta and Francisco both died of the Spanish influenza in 1920 and 1919 respectively, and have since been canonized as saints. Lucia became a Carmelite nun, writing her memoirs as well as other books. She died in 2005 at the age of 97, and for some reason her room at the convent she lived at has been sealed. Millions of pilgrims have come to Fatima since 1917, where a church was built over the site of the visions.

The film is somewhat forgotten today, but that could have been what the filmmakers were going for. I have feeling they weren’t looking to make another Song of Bernadette; it was a low-budget, lower profile film that filled out time in the usual double-feature program. As such, there isn’t a lot of ancillary material out there. Even TCM talks mostly about the actual event as opposed to the making of the movie.

In the end, though, that’s what counts. I’m not Portuguese, or even Catholic, and I can’t say one way or the other whether or not I believe totally in the visions. I don’t want to get into a big theological discussion here, but what was apparently said doesn’t exactly line up with Scripture, which is one of the criteria the Bible gives for testing prophecy. Still, Christians are not to treat prophecies with contempt, and there are things about Fatima I can’t dismiss. It’s something to think about, that’s for sure.

For more of the Luso World Blogathon, please see Le and Beth Ann. Thanks for hosting, ladies–this was a great idea! Thanks for reading, everyone and hope to see you Friday for the William Goldman Blogathon…

The Miracle of Our Lady of Fatima is available on DVD or to stream from Amazon.

7 thoughts on “Fatima In Hollywood”

As a lot of you probably know, Angelina Jolie's new movie, "Those Who Wish Me Dead," comes to theaters and HBO Max tomorrow, and for Taking Up Room's first Origins post of 2021, we're looking back at her 2008 film, "Changeling." Ever seen this one? Link in bio. #blogsofinstagram #changeling #angelinajolie #johnmalkovich #clinteastwood
Remember "House of Flying Daggers"? Taking Up Room looks back at this Chinese spectacle today. Link in bio. #blogsofinstagram #houseofflyingdaggers #ziyizhang #andylao #dandansong #takeshikaneshiro
Hope everyone is having a sweet Mother's Day! 😊 #happymothersday❤️