It seems I can’t get out of October without looking at the work of Edgar Allan Poe, and this year’s finding is the 2013 animated anthology, Extraordinary Tales. I discovered this little Raul Garcia product on Netflix, and while it’s not the best adaptation of Poe’s stories, it’s still a fascinating film. Parents beware, though: Extraordinary Tales might be a cartoon, but it’s definitely not geared for the young kiddos.

The movie presents five of Poe’s best-known stories strung together by a crow visiting with Death, which is embodied by a statue in a graveyard. The tone is bright though languid, with Death all but flirting with the crow. The crow, who obviously represents Edgar Allan Poe, is familiar with Death but holds back somehow, as if refusing to acknowledge something. Death then proceeds to remind Poe of the cozy relationship they have always had. 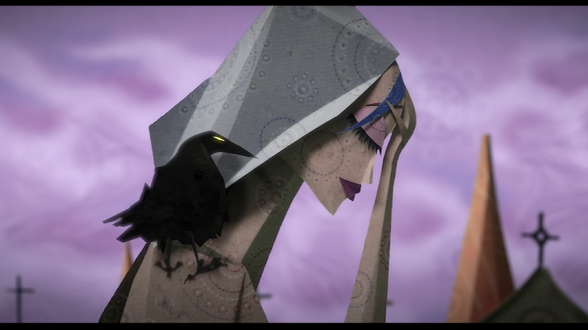 There are five Extraordinary Tales, and each one looks different because they were all funded by different companies. While cohesion suffers, the film as a whole does offer surprises.

It kicks off with “The Fall of the House of Usher,” narrated by Christopher Lee. Like the graveyard segments that bookend each story, Usher looks like CGI done in a cutout style. While it sticks pretty closely to Poe’s original tale, it feels awkward and not very polished. It doesn’t make any big waves, either. 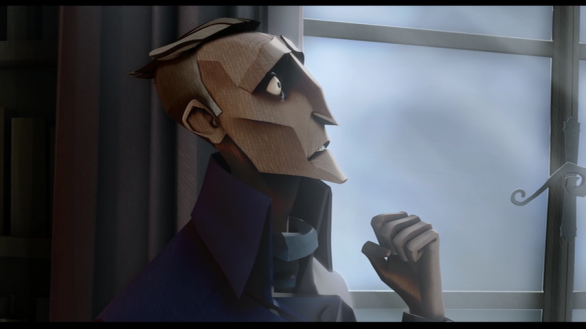 I think the main problem with the segment is that it downplays how much Roderick Usher was decaying before the narrator’s eyes. In Poe’s original tale, Roderick had changed so much that his longtime friend was shocked at the sight of him. On the other hand, Christopher Lee’s familiar basso profundo makes it all worthwhile, and cute cutout animation doesn’t really lend itself to devolution anyway.

Another segment, and maybe the creepiest, is “The Facts In the Case of M. Valdemar.” Probably the least well-known of the five, it’s done in a comic book style and narrated by Julian Sands. A doctor has the bright idea of hypnotizing a dying man right at the moment of death, with the goal of reviving him and restoring him to health. He spends days monitoring the man’s breathing and taking notes of his vital signs before he finally administers the treatment. The big question is, though, does the corpse want to be brought back from the dead? He just may have an opinion on the topic. 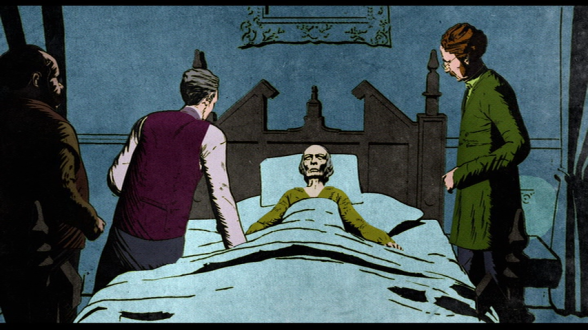 Good golly, it’s weird, and it’s considered one of Poe’s most gruesome stories. Written in the style of a scientific report, “Facts” fooled a lot of people when it was first published in 1845. Public figures such as Horace Greeley denounced it, calling it a hoax. Poe himself had to admit it was pure fiction. However, his fellow writers did commend him for the story, Elizabeth Barrett Browning being one of them.

Extraordinary Tales ups its street cred in “The Tell-Tale Heart,” which features Bela Lugosi narrating. What? Bela Lugosi? Yep. It sets a reading Lugosi recorded in 1947 to a stark, Breccia-inspired black-and-white motif, with identical bald guys in suits coming after the narrator, who is racked with grief at the way he buried his friend. I half-expected one of them to intone, “Mis-ter An-der-son,” like The Matrix‘s ever-lurking Smith. 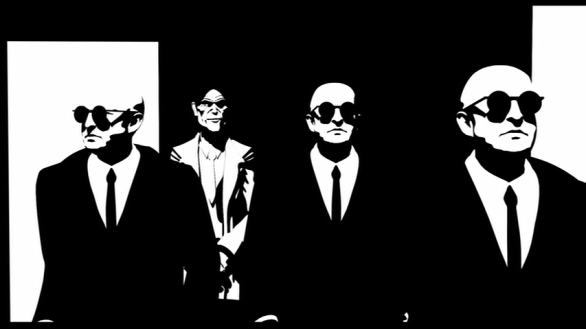 Anyway, the recording was based on a one-man show Lugosi used to perform in the late forties. It only had about eight performances and started out strong, but unfortunately, its producer, Don Marlowe, who was Lugosi’s agent at the time, was famous for his inability to sustain momentum after intial success. Poor Bela.

I think my favorite of the five was “The Pit And the Pendulum.” For this story, Extraordinary Tales uses straight-ahead CGI, dominated by muddy blacks and browns. Narrator Guillermo del Toro sounds like he was wearing lead weights on his shoulders when he read his part, because his voice is awash in despair. 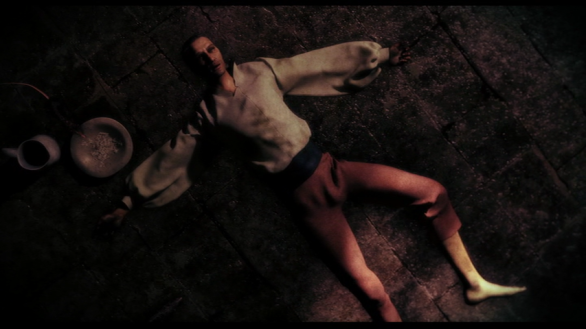 This is not Vincent Price’s psychadelic, paint-spilling torture-fest, not even remotely. Oh no, it’s almost pure Poe. As I said in my earlier review, the story consists entirely of internal monologue, following a prisoner sentenced to death during the Spanish Inquisition. He’s been left to languish in his cell, and can only watch helplessly as it crumbles underneath him. He does find friends, however, first among the inevitable mice and rats that inhabit the prison, and then later in someone even more influential. All I’ll say is that Poe was trolling when he wrote the end of this story, and there’s no way I’m going to spoil it.

The only short that doesn’t have narration is “The Masque of the Red Death,” which features Roger Corman as the doomed Prince Prospero. However, it does have a little bit of nudity. It’s cartoon nudity, but still nudity all the same. Anyway, it favors a simple watercolor motif, with the dominant color outside the castle being various shades of red, of course. The lack of narration kind of blunts Poe’s descriptions of Prince Prospero’s utter isolation and arrogance in thinking he’s immune to the plague devastating his kingdom. In the end the story’s final punch is more of a light jab. 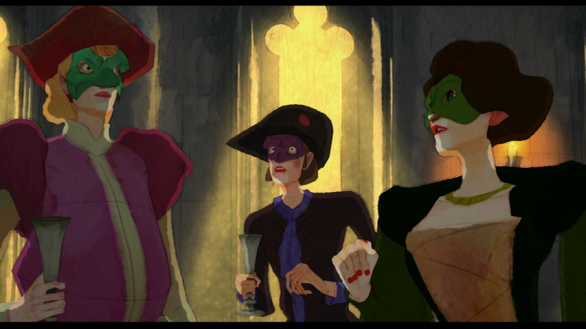 What’s a little funny is that Death prods Poe about accepting his own demise, when this wouldn’t have been the case at all. It seems rather historically illiterate. As a Victorian, Poe was endlessly aware of death because it was so common to his era. At the end of his life he may not have cared much when his own time came.

As a matter of fact, no one even knows what Poe died of, although a test of a surviving lock of his hair shows high levels of toxic metals such as arsenic and lead. Some Poe sites speculate Poe’s drinking water was contaminated, but arsenic was used pretty frequently in that time, such as in wallpaper. It was not uncommon for Victorians to get sick from the toxic fumes.

I think what would have been more effective would be to see Poe as the raven flying around Poe’s study, or any study, complete with The Raven‘s pallid bust of Pallas, reflecting on his life and the world he lived in. They could have easily kept the cutout look and it would have added a lot of visual interest, not to mention stay truer to Poe’s favorite tropes.

The other thing is that while it’s understandable that Tales wouldn’t and couldn’t be a word-for-word adaptation of Poe’s work, I feel like it could have been bigger and longer. It feels too surface-y, even if it does look great and has a lot of great moments. However, it’s an interesting introduction to Poe and flies by. If viewers want more, they can always dig into Poe’s original stories. I only wish Extraordinary Tales hadn’t taken Poe out of his own context.

Hope you all check back tomorrow, when I’ll be posting something about one of my favorite people. Thanks for reading, all…

Extraordinary Tales is available on DVD from Amazon.

Anyone seen "King Richard"? What did you think? I have, finally, and I have thoughts. Link in bio. #blogsofinstagram #kingrichard #willsmith #aunjanueellis #demisingleton #danielelawson #saniyyasidney #serenawilliams #venuswilliams #richardwilliams
Taking Up Room turns six today...can you believe it? I sure can't. Click the link in my bio to read a wee birthday post and have some virtual cake. #blogsofinstagram #takinguproom
December's Page To Screen is the 80s classic, "The Neverending Story." Who else loves this movie? Click the link in my bio to see how this fantasy came to be and why its novel's author, Michael Ende didn't want anything to do with the movie. #blogsofinstagram #theneverendingstory #noahhathaway #barretoliver #tamistronach #michaelend