For those of you who would like to find out what all this strange Shame business is about, please visit Cinema Shame. Past 2019 Shamedowns can be found here.

The timing of this Shamedown is ironic, as today we’re remembering those we lost on 9-11. On the other hand, it’s oddly appropriate. There are so many stories of the bereaved families holding on to whatever they can–photos, voice mails, e-mails, letters, video, whatever–anything that allows them time with their loved one. Today’s post is about holding on.

When an actor dies while making a film, it’s not just a matter of personal loss for the cast and crew, but finding a way to pay tribute to the actor’s final work. Jean Harlow succumbed to uremic poisoning while filming Saratoga. Brandon Lee died of an accidental gunshot wound during principal production of The Crow. Both were replaced by body doubles, but their absence was keenly felt. Another film that faced this problem was 2009’s The Imaginarium of Dr. Parnassus. It may be a wildly fantastical Terry Gilliam movie in the tradition of Faust, but no one can watch it without thinking of Heath Ledger.

The film opens on a street in the rough part of London. The time period is ambiguous, but there are clubgoers stumbling out of a local establishment after last call. While they lurch past a nondescript box by the side of the road, it suddenly opens up to reveal a sign saying, “The Imaginarium of Dr. Parnassus,” and a guy, Anton (Andrew Garfield) pops out from behind a curtain dressed as Mercury. He welcomes people to the show, where he introduces Dr. Parnassus (Christopher Plummer), an old man made up with a chalk-white face and grizzled hair. There’s also a lady, Valentina (Lily Cole) and Percy (Vernon Troyer), a little man dressed as a fly rounding out the cast. The whole thing is straight out of a Victorian townhall melodrama or a Georges Mélies film. 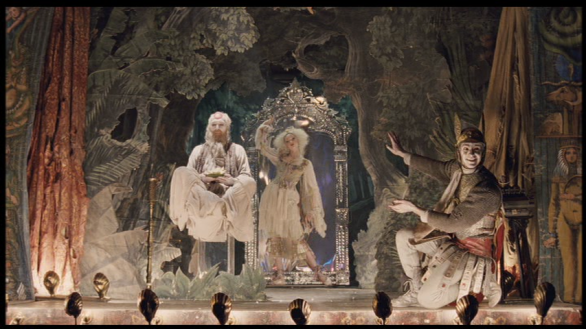 Drunks aren’t traditionally the most decourous of audiences, and soon a particularly cocky lounge lizard, Martin (Richard Rimmell) hops up on the stage and chases Valentina through the mirror, which is just two pieces of Mylar hung inside a frame. Even in his drunken stupor he’s surprised to find a whole forest behind the mirror on the Parnassus stage, where Valentina is flitting and floating about. She allows Martin to only get close enough so she can give him a couple of right hooks and a hearty punch in the stomach. Then she flits off again, leaving Martin fuming and faceplanting into a giant mud puddle.

Martin discovers to his shock and horror that he’s suddenly turned into Bruce Crawford and is knee-deep in empty ale bottles. Meanwhile, on the other side of the curtain, the Dr. Parnassus cast are having to fend off Martin’s girlfriend (Katie Lyons), who is freaking out because Martin is still backstage. 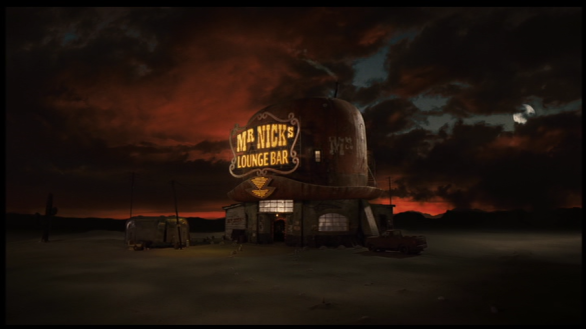 Heh. Little does she know. Martin gets lifted out of the forest into the stratosphere by some weird green hand creatures, then dropped onto a giant thumbtack, whose business end he narrowly misses. After that, he has the choice of climbing stairs to recovery, or going to a bar that bears a remarkable resemblance to the famous Brown Derby. Martin chooses the bar, which blows up. Meanwhile, Dr. Parnassus shows a suspicious policeman what’s through the mirror–a burned-out restaurant.

Dr. Parnassus’s Imaginarium next heads to a fair, where a naughty kid goes through the mirror, and to his delight finds a Candyland kind of place, where he can blow things up with his handheld game controller. Before anything can really happen to him, though, his parents demand to see him, so Dr. Parnassus lets him go. 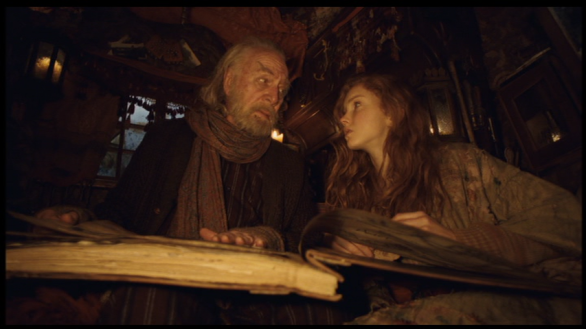 Parnassus has been keeping a secret from his daughter. She always has to wear an anklet of bells, and she wants to know why. He tells her that when he was a young monk, he made a deal with the devil, who’s called Mr. Nick in the film and played by Tom Waits with a John Waters-like mustache. The bet was that Parnassus would try and win people over to imagination and intelligence, while Mr. Nick would work the fear and ignorance angle.

Even though Parnassus won the bet, his victory is on hard terms. He has eternal life, but he also has a rootless, aimless existence. Then Parnassus gave it up because he fell in love. As a result, Mr. Nick will own his daughter, Valentina when she’s sixteen. He can, however, save her if he uses his mirror to pursuade his audiences to make good choices. Therefore, he doggedly leads the troupe around the UK, doing show after show, hoping to win souls. As Anton puts it, “He wants the world to rule itself.”

It’s rather ironically shocking that the first time we see Heath Ledger in this film he’s hanging from a bridge, nearly dead. The troupe rescues him and finds he’s got amnesia. Since they don’t know what else to do with him, he’s installed as a bird dog, drawing people to the show. Not surprisingly, the women are quite taken with him and slip plenty of pound notes into the company’s kitty.

Parnassus soon tells the stranger his name is Tony. He doesn’t really explain how he knows it, but Tony confirms it. What he doesn’t tell them is that he’s faking the amnesia bit. Valentina is very attracted to Tony, which makes Anton jealous.

Tony has some ideas to revamp the show. He uses the funds they’ve taken in to give the stage a makeover and put everyone in different costumes. Parnassus is a swami, Valentina is Eve, Anton is a woman on a davenport, and Percy is Flip Wilson. Tony, meanwhile, wears a clean white suit and black eyeliner. Women are not only taken with him, but they beg him to take them behind the mirror.

Always, always, Mr. Nick lurks about, smirking and taunting Parnassus about fear and ignorance winning out in the end. There is a battle ahead for everyone, and not everyone will come out alive.

Heath Ledger died about a third of the way through principle photography. It’s always a weird feeling to see a movie knowing its lead actor passed away, especially if the death was sudden and unexpected, because it’s kinda like seeing a ghost.

He doesn’t even show up until half an hour into Parnassus, and the filmmakers clearly sought to use as much of his footage as possible. Where Ledger was absent, Johnny Depp, Jude Law, and Colin Farrell stood in. As Tony dons a doctor’s mask for a good portion of the real world sequences, Gilliam enlisted Zander Gladish to wear Tony’s costume but not say anything.

While Gladish and the other actors did a fine job of pinch-hitting, they don’t have the same presence as Ledger. Johnny Depp is Johnny Depp. Jude Law is Jude Law. Colin Farrell is Colin Farrell. In a way, this works to the film’s advantage because the Parnassus mirror has a way of changing people into what they don’t recognize.

It also feels random and disjointed, because Ledger’s loss is a constant brick in the stomach. Terry Gilliam movies tend to be quirky and busy, but plot-wise they’re fairly air-tight. In this instance, though, not so much. It gets stranger and stranger as the story progresses, and it’s about twenty minutes too long. Scenes that would have probably been trimmed for time stayed in because the movie needed the padding.

In all, Parnassus looks like a film that was cobbled together to satisfy audiences clamoring to see Ledger. It fills a need and not much else. Plenty of critics were “meh” about The Imaginarium of Dr. Parnassus, but it gives me an intense melancholy, not only due to one of the finest actors of my generation leaving us far too soon, but the eternal question of lost potential. Like the victims and heroes of 9-11, although for different reasons, Ledger was gone way too soon.

Thanks for reading all, and check back here on Tuesday for a new Reading Rarity…

The Imaginarium of Dr. Parnassus is available on DVD from Amazon.