Pearl Harbor wasn’t the only locale attacked by the Japanese in December of 1941. Another was Wake Island. It’s one of the most isolated islands in the world, but Wake Island was both a Marine base and a refueling stop for the Pan American Clipper, which made it strategically important and therefore no small target in the Pacific theater. Fighting took place between December 8 and December 23, 1941, when the island fell to the Japanese. Marines and civilian contractors were taken prisoner, and for the rest of the war, Americans were in the dark about what happened to their loved ones.

However, on August 11, 1942, Paramount released the fictionalized feature film, Wake Island, which was based on communiques from the beleagured Marines. 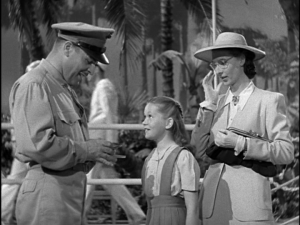 The film opens with a bit of narration emphasizing Wake’s remoteness and how the United States had to build their base with very few natural resources. We also see Major Geoffrey Caton (Brian Donlevy) depart from Pearl Harbor for Wake, along with Bruce Cameron (Macdonald Carey), a newlywed. Caton’s daughter, Cynthia (Mary Thomas) and Bruce’s wife, Sally (Barbara Britton) have come to see them off, and there are lots of tears. Cynthia presents her daddy with a new cigarette case, which she’s engraved herself.

Also on his way to Wake Island is Shad McCloskey (Albert Dekker), a civilian contractor who’s been hired by the government to oversee the digging of slit trenches and building up of the island’s infrastructure. Shad’s kind of a grumpy fella, and he doesn’t like military folks, or “brass hats” as he calls them. He doesn’t even want to be friendly with Major Caton when the latter offers him a shave. 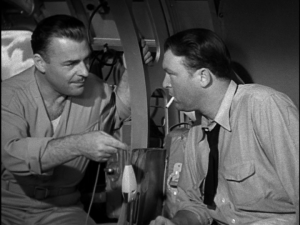 Caton’s going to be the commanding officer of a Marine fortification that has, up until his arrival, been pretty loosey-goosey. Then men don’t have all that much to do, and when they’re off duty they shoot the breeze on the beach and catch glass floats. The island even has a scruffy little terrier named Skipper, who’s the mascot of the company.

The biggest cut-ups are Privates Joe Doyle (Robert Preston) and Aloysius K. Randall (William Bendix), known to everyone as “Smacksie.” These two guys are like Mutt and Jeff, scrapping it out one minute and teasing the other Marines the next. They especially enjoy ribbing a German American corporal named Gus Goebbels (Phillip Van Zandt), yelling out “Heil!” behind his back. It drives Gus crazy because he can never figure out who’s doing it. 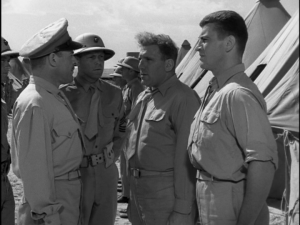 Once Caton arrives, loosey-goosey goes bye-bye. Suddenly everyone’s got to tuck in and button up their shirts instead of using them to camouflage gun emplacements. He even gets Joe and Smacksie to dig trenches after he catches them scrapping.

Smacksie’s already acquainted with Caton, as he served under him in China, but he doesn’t care about the new rules because his hitch is almost up. He’s all set to go back home to San Francisco to marry his sweetheart, Myrtle. Joe bets him ten bucks he won’t leave. Smacksie smirks, because he’s got all sorts of plans. 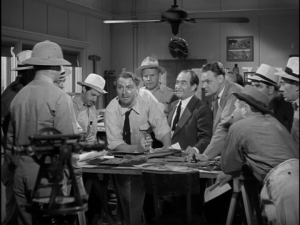 McClosky stays grumpy after his arrival on the island. He’s a martinet for discipline, and it bugs him that his men have to run for cover during air raid drills. Caton testily reminds him that orders from the United States Navy will be obeyed. McClosky glowers, but that’s all he can do.

In early December, the Marine officers host Japanese envoy Saboro Kurusu, who’s on his way to Washington as part of peace negotiations between America and Japan. Kurusu seems cordial enough, offering a toast in honor of Franklin Roosevelt, and Commander Roberts (Walter Abel) offers one in honor of Emperor Hirohito. 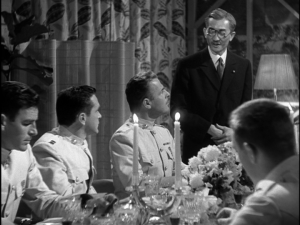 The film doesn’t name Kurusu, but after the dramatization of him on Wake, shows a clip of the real Kurusu walking into Secretary of State Cordell Hull’s office. Wake Island stresses what Kurusu maintained until the end of his life–he thought he was bringing a message of peace to Washington. Despite that, he’s portrayed as rather slimy and sinister. During his toast, which likely didn’t happen except in the movie, the other officers glance at each other as if they don’t buy what Kurusu’s selling.

Once Pearl Harbor is attacked, Wake goes into overtime fortifying its defenses in preparation for their own battle with the Japanese. It’s not a spoiler to say that the fighting is pretty much non-stop, but the Marines battle courageously even though it’s a losing game. On the lighter side, Smacksie loses his bet with Joe, and Skipper has puppies. 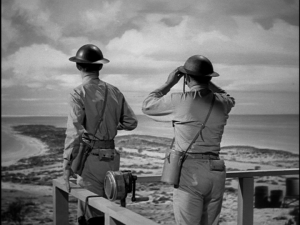 What is a spoiler is that the film presents Wake Island as being the Alamo of the Second World War. It was, but Wake had a much higher survival rate. In reality, the American public had no way of knowing what happened after the island fell, and wouldn’t know until Wake Island was liberated in August of 1945.

The Marines on the island, along with some civilians, were eventually transferred to prisoner of war camps in Asia, while the rest were enslaved by the Japanese. Working in brutal conditions, they were forced to build various structures for their captors.

That’s not to say the United States completely abandoned Wake Island during the war. Air raids were staged, giving the Japanese a taste of their own medicine, and were so effective that the Japanese were cut off from obtaining supplies. Unfortunately, though, the Japanese retaliated by shooting ninety-eight of the civilians still on the island, burying them in a mass grave by the airstrip.

A ninety-ninth individual, whose name is lost to history, managed to temporarily escape, carving a note about the massacre on a rock near the burial site. This man was caught three weeks later and beheaded. The admiral who executed him, Sakaibara, was executed himself after the war for his many crimes. The message on the rock is still visible today, and the island is controlled by the United States Air Force. 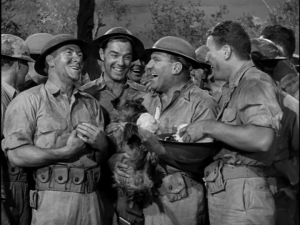 As far as the movie goes, it went into pre-production while the battle was still going on and shot between April and July of 1942, with the release date a few weeks later. There was no way it could be filmed on an actual Pacific atoll, so San Diego, Salt Lake City, and the Salton Sea became the stand-ins. According to TCM, local residents had to be warned so they wouldn’t freak at the sight of Japanese planes flying over their hometowns. Not much is known about the actual production itself, but the film released to tremendous success and led to a jump in Marine recruitment. It also resulted in William Bendix getting his one and only Oscar nomination for his role as Smacksie.

Wake Island was a huge hit because the public was anxious to know what had happened to our men in the Pacific, and, as film historian Jean Basinger noted, they carried that with them into the theater. While the film may be criticized today for its lack of character development, it is simply a retelling of a real event that was still ongoing when the movie came out. Ergo, the characters were types that served a purpose. They reminded the public that fighting the war was their job, or as Caton puts it in the film, “We’ve got to destroy destruction.”

The surviving Wake Marines were surprised and highly gratified that Hollywood had paid tribute to their plight so early in the war, although they did have a few problems with it. “There was nothing real about the movie whatever.” said one at a Wake Island reunion. Also, they never had a dog.

For audiences nowadays, Wake Island is a relic from a time when the future looked pretty bleak. It might seem like it’s just a war movie, but there’s education to be had there, even if the passing years have proven it to be not exactly authentic.

That’ll do it for my Day Two, and tomorrow we’ll head to another place in the Pacific Theater. In the meantime, if anyone wants more of the World War Two Blogathon, feel free to pay Maddy and Jay a visit. Thanks for reading, all, and see you soon…

Wake Island is available on DVD from Amazon.

© Rebecca Deniston and Taking Up Room, 2021. Unauthorized use and/or duplication of this material without express and written permission from this site’s author and owner is strictly prohibited. Excerpts, images and links may be used, provided that full and clear credit is given to Rebecca Deniston and Taking Up Room with appropriate and specific direction to the original content.