Time to talk about Ms. Leigh…

One of my favorite movies is 1949’s Little Women. I can’t remember the first time I saw it. Maybe it was elementary school? I don’t know. Anyway, it’s a sweet version of Louisa May Alcott’s story and one I always like to revisit. Our lady of the weekend, Janet Leigh, plays Meg, which we’ll get to in a bit. The story is familiar to a lot of people, but I’ll summarize a little of it anyway because there were a few changes made. Well, to the story, anyway. The movie itself? Not so much. Little Women cuts out major chunks of the book. This isn’t surprising, seeing as it’s about six-hundred pages long. What is surprising is that MGM kind of phoned it in.

Just as in the book, the film opens on a snowy day in Concord, Massachussetts, right before Christmas. Tomboy Jo (June Allyson) is on her way back from skating, and attempts a graceful hop over the fence. When she falls flat on her face, her sisters at the window chuckle. Jo answers them by hopping over the fence and throwing a snowball at the window.

Inside, shy Beth (Margaret O’Brien) is trimming the tree, sweet Meg (Janet Leigh) is making over a filmy pink dress, and selfish-but-proper Amy (Elizabeth Taylor) is dramatically sitting by the fire with her sketch pad. Their dad (Leon Ames) is away at war, their mother, Marmee (Mary Astor) is busy doing charity work, and the family is gamely attempting to have as normal a Christmas as possible in spite of no presents and no Dad. They rehearse Jo’s play, with Amy fluttering and fake-cowering, Jo wearing a feather for a mustache, and Beth drumming out a creepy tune on the family’s rickety old piano.

Presiding over the family is Marmee, a gentle soul who wants her daughters to be themselves and take care of each other as well as those in need. Under her guidance, the sisters find love, face sickness, and learn how to overcome their own personal obstacles. The family is also watched over by rich next-door neighbors Laurie (Peter Lawford), his grandfather, Mr. Laurence (C. Aubrey Smith) and Laurie’s tutor, Mr. Brooks (Richard Wyler). Mr. Brooke is quite taken with Meg right off the bat and keeps one of her gloves in his pocket before he even confesses his ardor.

Meawhile, Jo wants to be a writer, but she tries to pigeonhole herself into writing torrid melodramas because she thinks that’s what she has to do to be successful. Amy has to learn not to be stuck up and selfish. On the flipside, Beth and her shy ways may be the most subtle influence on all of them, as she quietly plays her music and works in the background to make home inviting. Beth’s presence may not be loud, but if she’s ever absent, it’s missed.

Janet Leigh is a beautiful and motherly Meg who just gets more motherly as the film goes on. There’s no big buildup to her getting the part; MGM assigned the role to her and she took it. Janet loved playing Meg, and the movie was significant for her because she was given billing for the first time. Janet, June Allyson, Margaret O’Brien, and Elizabeth Taylor were as thick as thieves, eating together in the MGM commissary in full costume and getting the giggles with Peter Lawford onset. Mervyn LeRoy mostly let them run with it, knowing the cameraderie would enhance the final film, but according to Michaelangelo Capua, Leigh’s biographer, Mary Astor was annoyed because she thought everyone needed to buckle down and get to work.

Little Women was made at a time when Americans were recovering from the Second World War. Our servicepeople were all home or mostly home, families were adjusting to all the changes that had taken place, and there was a general desire to recapture Americana. Quiet stories like Little Women filled a need for homey, comforting entertainment to a war-weary public and to soldiers who had seen so much horror. Plus, the March family having to make sacrifices while the head of the household was off fighting would have been immensely relatable. However, the film got mixed reviews with some of the critics saying that none of the cast made much of an impression.

I disagree, because Little Women has a lot of sweet charm. The only thing that strikes me about this version of Alcott’s story is how similar it is to the 1933 Selznik iteration. So similar, in fact, that, according to IMDb, MGM used the shooting script from the previous film. A lot of the sets are the same and some of the music is even the same. Literally–the Max Steiner theme had been used in the Selznik film, and MGM bought Selznick’s sets. And Katharine Hepburn wears the feather in the playacting scenes. Plus, the actresses in both films were too old for their roles. So, for all intents and purposes, it looks as if MGM was trying to not only remake the 1933 film, but one-up Selznik with Technicolor.

MGM bought the rights to Little Women after David O. Selznik unsuccessfully tried to remake the film. Selznik’s original idea was to have Jennifer Jones, who was almost thirty at the time, star in the film with Shirley Temple costarring, and according to TCM, it’s not clear why it didn’t work out. It could have been just canceled, who really knows. Selznik was always trying to recapture his Gone With the Wind success and never really could. Financially, he didn’t have a lot of wiggle room, so he had to do whatever he could to generate some cash flow, and what’s better than selling a sure property to his former father-in-law, L.B. Mayer? 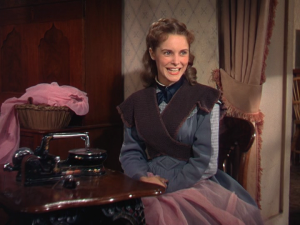 However, the movie isn’t terrible–it’s very sweet, actually, and it was a great way for Janet Leigh to move up the celebrity ladder. The 1949 film always feels very home-y and I like the cameraderie between the cast members. I think I’ll always enjoy this take on the March family, even if it does hack on the 1933 version.

For more of the wondeful Janet, please see Michaela at Love Letters To Old Hollywood. Thanks very much for hosting, Michaela–this was fun. Thanks for reading, all, and I hope you’ll check back tomorrow, because I’m participating in another surprise blogathon. Until then…

Little Women is available on DVD from Amazon.

10 thoughts on “Janet and Meg”