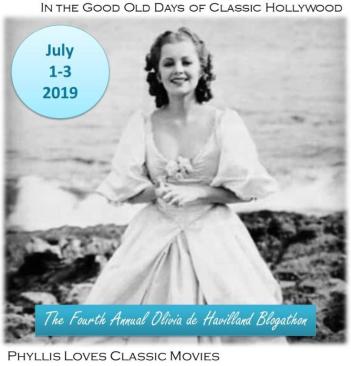 One of the nicest things about blogging is that it invites people to branch out, and among the stars I’m enjoying learning more about is Olivia de Havilland. Prior to starting Taking Up Room, the only movies of hers I had seen were Gone With the Wind, Thank Your Lucky Stars, and The Adventures of Robin Hood. For Crystal’s latest Olivia-fest, I’ve picked out the 1949 drama, The Heiress, a torrid tale about a lady who wants to shake off her demons and control her life on her own terms.

The movie takes place in the Washington Square area of New York during the mid-nineteenth century. Catherine (Olivia de Havilland) is an awkward, eccentric loner who would rather embroider than mix with others socially. Her dad, Dr. Austin Sloper (Ralph Richardson) wants her to get out and talk to people instead of keeping to herself. It might seem like his motives are her own good, but Austin can’t help but remember his wife, and he wants her to live on through Catherine, who he considers to be endlessly mediocre. 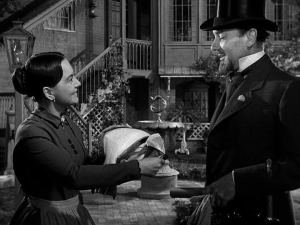 Catherine is comfortably well-off, with an income of ten thousand dollars a year, or about 230K in today’s money. She’s set to inherit an additional twenty thousand a year, or just under 400K, unless she marries someone Austin doesn’t approve of. If that happens, he’ll donate his fortune to the local medical society.

Dutiful daughter Catherine is eager to please, so she gamely makes the effort to dress up and socialize. Encouraging her is Aunt Lavinia (Miriam Hopkins), who is a new widow and Austin’s wife’s sister. She’s moved into the Sloper house, and she’s a hopeless romantic who wants Catherine to be as happy as she was. At Catherine’s cousin, Marian’s (Mona Freeman) engagement party, Lavinia helpfully hustles her out on the dance floor with various men, all of whom ditch her. 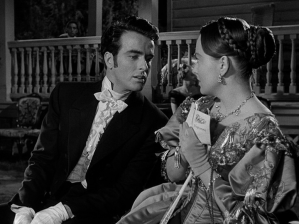 Catherine’s face is like a bucket of worms until she meets Morris Townsend (Montgomery Clift). He has very big eyes for her, literally and figuratively. He not only keeps very close tabs on Catherine at the party, but he becomes a fixture at the Sloper house the week after the party. He plays and sings “Plasir d’Amour” on the piano and charms her naïve, desperate-for-love self.

Catherine and Lavinia are dazzled. Morris is handsome, dashing, and romantic, and he seems to love Catherine. The only skeptic is Austin, who suspects Morris is a gold digger, and when the latter proposes to Catherine, his fears deepen. Catherine and Lavina are giddy, but Austin starts digging. He notices that a pair of gloves Morris left behind are of the finest chamois and only gets more intrigued. 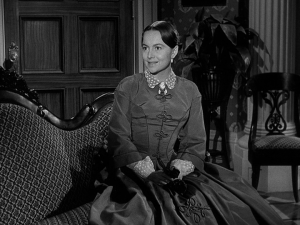 The next morning, Austin has his mother, Elizabeth (Selena Royle) and Mrs. Montgomery (Betty Linley), Morris’s sister and a widow, over for a talk. Austin doesn’t waste any time, but asks questions about Morris’s background, and what he finds is disheartening: Morris spent his own fortune but still manages to live large, and when his sister was widowed with children, didn’t lift a finger to help her. Austin brings in Catherine so that Mrs. Montgomery can see who Morris says he loves, and Catherine is so shy she can barely talk to her. Mrs. Morgan looks uncomfortable, and as soon as she decently can, she beats a hasty retreat.

Austin decides to take Catherine to Europe for six weeks to see if he can get Catherine to forget about Morris. Catherine is disappointed but resigned, and she’s more enamored than ever with Morris when he presents her with a hand-warmer. It’s no surprise that the trip is cut short because Catherine has dug her heels in. 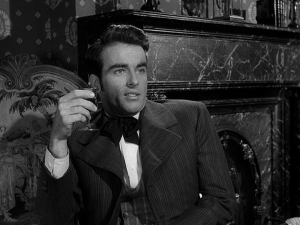 Meanwhile, back at Washington Square, Morgan has gone to great lengths to ingratiate himself to Lavinia. He comes over to visit her and play backgammon, helping herself to brandy and cigars. He’s there the night Catherine and Austin get back from Europe, and Lavinia tells him to come back the next day.

However, Catherine sees Morris leaving and runs out in the rain to see him. He tells her they’re going to elope to Albany, but Catherine is so impatient that she asks if they can go that night. She doesn’t care if she gets disinherited because she loves Morris so much. At that, Morris’s face drops, but he promises to come back at half-past midnight. Catherine is too starry-eyed to notice the change in him, though, and happily waits for him. 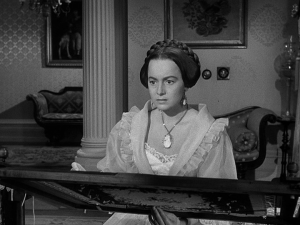 One guess as to what happens next. Yep. Morris doesn’t show. Heck, he makes a beeline for California. Catherine is heartbroken, but also changed forever. She becomes as steely and sure of herself as she was shy and retiring. She also makes more of an effort to look attractive. Her story isn’t over yet, and certain people in her life are in for a shock.

Olivia de Havilland saw The Heiress in New York, and she convinced William Wyler to work with her on a film version for Paramount. According to TCM, the film rights were bought from the playwrights, Ruth and Augustus Goetz, for $250,000, plus $10,000 a week for the Goetzes to write the screenplay. The only one who hesitated was Montgomery Clift, who didn’t think he could pull off the role of the Victorian sponge. He was probably right; Wyler had him take dance lessons because Clift slouched too much. Despite the difficulties, everyone’s efforts paid off, netting de Havilland a Best Actress Oscar. 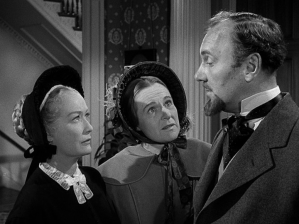 I gave The Heiress my full attention. Seriously, I was glued to it. Not only because I was hoping Catherine wouldn’t do anything stupid, like kill herself or Morris, but because I was hoping she could find a way to resolve her situation according to her own lights. The ending is a simple, direct, fist-pumping triumph.

Plus, the historical accuracy of the film is meticulous. They didn’t try to link the costumes to the forties in any way, so none of the actresses sport pageboys or Betty Grable-style bangs. Their hair is parted down the middle and done up in elaborate braids, as if they had used Godey’s Lady’s Book for style tips. They wear minimal makeup, which was also true to the time, as only loose women in the Victorian era wore makeup. The makeup in The Heiress only serves to make the cast’s features visible, but there isn’t any overt glamour going on. No bright red lips or heavy mascara for this crowd. I could see Olivia de Havilland’s crow’s feet in the closeups. 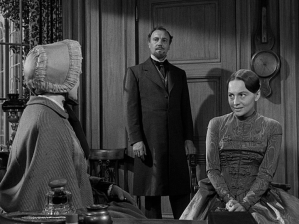 The dresses are precisely correct. The fabrics are in period, the cuts are in period. Even Olivia de Havilland’s bustline looks Victorian–she was probably wearing a chemise with her corset instead of a bra. It might sound funny to bring this up, but the temptation with period pieces is to make the stars attractive by current-day standards, so it wasn’t (and still isn’t) uncommon to make women look bustier than they would have. Meet Me In St. Louis is a great example–compare the period-correct Mary Astor with the more modern Judy Garland and Lucille Bremer. In contrast, the motto of The Heiress seemed to be, “Go Victorian or go home.”

This carries over to the sets as well. The ceilings were high, because Victorians liked air to have room to move. The rooms were suitably cluttered, with center tables and proper ladies’ and gentlemans’ chairs. I recognized familiar objects and finishes from my work at the Bernhard Museum, such as the square grand and the butter dish. 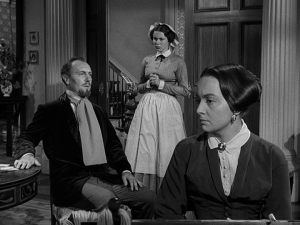 Even the way the house is presented is Victorian, because we only see Catherine and Lavinia’s bedrooms very, very briefly, and never the kitchen. In the Victorian era, houses were designed to have public rooms and private rooms. Sitting rooms, parlors, dining rooms, foyers, and downstairs hallways were public. Bedrooms and kitchens were private unless one was a close friend.

In mostly excluding the private rooms, the subtext seems to be that there are aspects of these characters we don’t know about. Austin’s bedroom is never seen, but the fact that Lavinia and Olivia are shown in each other’s rooms exhibits shows how close they are. The characters present enough of themselves to keep us intrigued, but there’s another layer to them that we can’t see, and the movie’s constant deep focus kept me hoping that would be revealed. 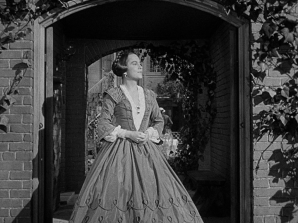 The Heiress is a masterpiece. It’s a very deft and thoughtful story that left me purring contentedly, and I will definitely be revisiting it.

For more of the great Ms. de Havilland, please see Crystal at In the Good Old Days of Classic Hollywood and Laura at Phyllis Loves Classic Movies. Thanks for hosting, ladies–it’s always fun! Thanks for reading, all. A new “Stage to Screen” is on the way…

The Heiress is available on DVD and Blu-ray from Amazon.

11 thoughts on “A Woman Scorned”