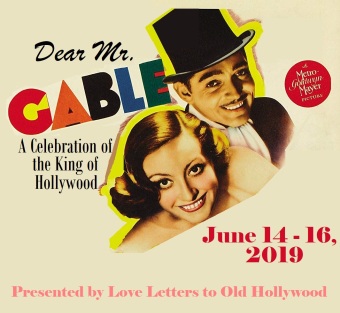 The King is back…

We all have to start somewhere, and one of Clark Gable’s first roles was in 1931’s The Painted Desert. It’s so early in Gable’s career that he doesn’t get billing of any kind. It was a loaded part for Gable, because it was literally the first time he spoke onscreen. Not only was Gable new to talkies like every actor in that era, but his previous work was as an extra in silent movies.

The film opens with a guy, Jeff Cameron (J. Farrell McDonald) writing in a journal about how it’s been four months since he and his buddy, Cash Holbrook (William Farnum) came out west and they’re now in the Painted Desert.  They’ve found an abandoned camp and an abandoned baby to boot. He’s hungry and scared, but otherwise fine. Jeff and Cash bivouac by a watering hole for the night and feed the baby.

Jeff and Cash disagree about whether to go on or stay by the watering hole. They don’t even agree on what to name the baby. Cash wins out, though, because he thinks the baby needs more than what they’ve got at the watering hole, and he rides away.

Who knows how many years pass. Jeff and Cash are now sworn enemies, with Jeff living on his ranch with his daughter, Mary Ellen (Helen Twelvetrees). Cash is a rival rancher living with the baby he and Jeff found, only he’s not a baby anymore. He’s all grown up, and his name is Bill (William Boyd).

Like many ranching communities, water is at a premium, and Jeff has one of the few watering holes in the area. Everyone’s allowed to use it but Cash, or at least that’s what Jeff tells Ranse (Clark Gable), a fellow from Montana who was on his way to New Mexico until he had to shoot his horse. Ranse is a tough guy who rolls his own cigarettes and glances appreciatively at Mary Ellen.

The three of them are chatting when they see a herd of cattle approaching the watering hole. Then, for some reason, they’re driven away by another rider. Jeff is miffed because that watering hole is one of his sources of income, and if no one uses it, then he doesn’t get paid.

Turns out, Bill Holbrook is the culprit, only he did it for honorable reasons. The herd belongs to Cash, and Bill is trying to keep relations as friendly as possible. What’s more, he thinks Cash and Jeff should reconcile, and he’s got a plan all worked out. He’s found tungsten samples on Jeff’s property, only Jeff can’t mine it because he’s broke. Bill wants Cash to partner with Jeff, and Bill will help him run the mine. He went to mining school and knows all about it. It’s the perfect plan.

Cash is so incensed that he kicks Bill out, and long story short, Bill convinces Jeff to partner with him in the tungsten mine. Bill also convinces a suspicious (and armed) Mary Ellen that he isn’t such a bad guy, even if he is a Holbrook. Meanwhile Ranse glowers at them from a distance, smoldering with jealousy.

The mine is up and running in a flash. It does so well that Mary Ellen is sent to school with the latest shipment. She and Bill make plans to meet in town soon, and happily part. Unfortunately, someone shoots at the wagon, and someone else blows up the mine. Cash is the prime suspect, but there’s more to this than meets the eye. There may also be a wedding in someone’s future.

Good golly, The Painted Desert is boring. It’s seventy-five minutes long but feels twice that length. There’s no proper story arc, and it gives the impression that the filmmakers were padding the film for time’s sake. Some of the plot points are random and odd, too. For instance, Mary Ellen gets sent to school, but no one says what kind of school. Is she illiterate? Is it finishing school? Who knows. She also gets ditzier as the movie goes on, which is a disappointing turn for a character who starts out by pointing a gun at Bill like she’s Calamity Jane.

The acting is wooden, but in all fairness, that’s typical of the period. Since The Painted Desert was made so early in the talkie era, movies generally consist of the actors clustering around a microphone. The Painted Desert is no different, and many of the players plod through their lines like Eeyore on a good day. None of this adds up to a very interesting mise-en-scene. It received mixed reviews, and in so many words, Picture Play Magazine asked, “Why does it exist?”

William Boyd is one of the bright spots in this movie. Really. The camera clearly likes him, and it’s fun seeing the guy who would become Hopalong Cassidy in his younger days. It’s just too bad he didn’t have much to work with.

Speaking of not having much to work with, Clark Gable’s character isn’t at all well-drawn. Ranse’s background and motives get called out all of a sudden, with no build-up or development up to that point, and it seems kinda tokenish. I wish the character had been approached more like Duke Mantee in The Petrified Forest, where there was no doubt as to his motives, or at least Ranse could have been a cross between Mantee and Alan Squier. The love triangle aspect of the film would have been more interesting that way.

However, Gable’s persona was already in evidence. He’s very masculine and handsome, projecting that famous screen presence that would make him the King of Hollywood. The Painted Desert caught the public’s attention, and after he made his next film, A Free Soul, Gable’s mailbox was suddenly full of fan letters. MGM called him “a lumberjack in evening dress,” to highlight Gable’s being all man.

The Painted Desert is largely forgotten today. It passed into public domain in 1959 and is readily available in various streaming formats. Yes, it deserves to be swept under the rug, because as a movie it basically stinks. Historically, though, the novelty of seeing the King’s first speaking role, no matter how minimal, is pretty important. Gable had nowhere to go but up.

For more of the King, please visit Michaela at Love Letters To Old Hollywood. Thanks for hosting, Michaela–it’s always a blast! Thanks for reading, all, and see you on Tuesday with another Reading Rarity…

The Painted Desert is available to own on DVD from Amazon.