Another talented composer of the twentieth century is Jerome Kern. His songs are graceful, elegant, and thoughtful, ranging from playful to poignant, and he frequently collaborated with such lyrical greats as Oscar Hammerstein, Dorothy Fields, E.Y. Harburg, Ira Gershwin, and Johnny Mercer. Kern’s biopic, Till the Clouds Roll By was released at the end of 1946, a year after Cole Porter’s, and is sometimes compared to Night and Day. Kern didn’t care for the idea of his life being portrayed on film at first, because he thought his story wasn’t very interesting. However, as the prologue of the movie says, Kern’s story lies in his songs. Producer Arthur Freed could almost have dispensed with the biopic part and made the film a straight revue, but MGM didn’t, er, roll that way.

The film commences in 1927, on the opening night of Show Boat, which is, of course, a spectacle. In a partial foreshadowing of things to come, Katheryn Grayson plays Magnolia, only with Tony Martin as Ravenal and Lena Horne as Julie. Basically, it’s a medley of songs from the stage show, with nothing but solid music in the first sixteen minutes. 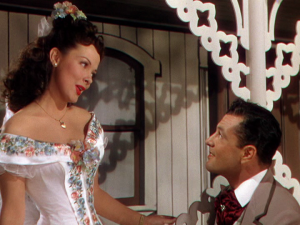 In between taking a bow and heading to the Waldorf for the afterparty, Kern (Robert Walker), known as Jerry to his friends, asks his chauffeur, Joe (William “Bill” Phillips) to drive by the house of an old friend of his. The house is now taking boarders, but it looks unchanged enough to spark some reminiscing, and Jerry proceeds to tell the very patient Joe about the first time he entered it.

Young Jerry aspires to break into show business as a songwriter, and he’s heard James Hessler, an orchestral arranger, is a great mentor. Mrs. Muller (Mary Nash), the housekeeper, thinks he’s come to rid the house of moths, but he soon sets her straight. James (Van Heflin), or Jim, as Jerry comes to know him, hears Jerry playing one of his songs for his daughter, Sally (played as a child by Joan Wells) and invites him to stay for lunch. Jerry quickly becomes a fixture at the Hessler house.

Well, Jerry thinks big. He joins Jim and Sally in England, where he writes for local shows. He also meets his future wife, Eva (Dorothy Patrick). It doesn’t take long for Jerry to get a contract with producer Charles Frohman, and when Frohman goes back to New York, Jerry and Jim follow. Frohman is a tough guy to pin down, though, because he soon goes back to England. Jerry tries to follow him again but misses the boat. This is actually a good thing, although not for Frohman, since Frohman was sailing on the Lusitania.

Jerry recovers, though, and here follows a string of successes and classic songs. He also marries Eva, and the two of them have a perfect marriage. Meanwhile, Sally (played as an adult by Lucille Bremer) grows up, and has her sights set on a theatrical career. She’s a bit bratty, unfortunately, leaving three different schools because she doesn’t think she and her classmates have anything in common. Inevitably, reality isn’t kind to her. When Sally’s song, “Who” is given to star Marilyn Miller (Judy Garland) for the good of the show, Sally doesn’t take it well, and goes out on her own.

Around this time, Jim’s health fails, and Jerry promises to find Sally. He hires private detectives to comb the country with no results…at first. It’s a musical. Chances are, it will end happily, and since it’s an MGM musical, chances are it will end big and classy.

In typical fashion, MGM pulled out all the stops for Till the Clouds Roll By. The musical numbers are dazzlingly sweeping, crowded with MGM stars mostly playing themselves. Besides Judy Garland, Kathryn Grayson, and Tony Martin, the cameos include Dinah Shore, June Allyson, Angela Lansbury, Virginia O’Brien, Ray McDonald, Marge and Gower Champion, Cyd Charisse, and Esther Williams, the latter of whom is briefly seen signing autographs.

Produced by Arthur Freed, the movie had at least five directors, although Richard Whorf was the only one to receive screen credit. It also had two editors, two directors of photography, two orchestral arrangers, and one choreographer. Whew. It took in $4.7 million at the box office, which wasn’t enough to make much of a profit.

Robert Walker is superb as Kern, although he was clearly struggling during the making of Clouds–his face is haggard and his eyes are baggy with tiredness, even during his younger scenes. It was a hard time in his life; his wife, Jennifer Jones had left him two years earlier for David O. Selznik, and they say that during the 1945 film, The Clock, Walker would go on benders and was almost listless on the set. He seemed to channel it into his portrayal of Kern, bringing a brooding quietness to the role. It came off very well, and anyway, Mrs. Kern liked him. She told her husband to send Walker to their house.

The film, of course, had elements of fiction, the biggest being Jim and Sally Hessler. According to TCM, Van Heflin’s character was likely based on Frank Sadler. Clouds, however, needed more conflict, hence the subplot of the dying mentor and the spoiled progeny. Naturally, the critics pounced on the seeming footnote of a plot. Variety asked “Why quibble?” and noted picky man Bosley Crowther called the storyline “alien corn.”

Critics aren’t always right, but I happen to agree with them on this one. Like I said before, Till the Clouds Roll By could have been a revue and I don’t think anyone would have complained. I sure wouldn’t have. I enjoyed the acting sequences to a point, but the musical sequences are where MGM really shine. That’s where they wanted to be anyway.

Sadly, Jerome Kern died of a cerebral hemmorhage in 1945 and would never live to see the film sorta-not-really based on his life. Also sadly, Till the Clouds Roll By fell into public domain, which is why DVD copies of varying quality can be found at dollar stores around the world.

His biopic may have gotten a slight raw deal in the end, but Jerome Kern does not get old. He’s one of those writers whose songs always find new life in new renditions and new tributes.

For more Broadway, please go here. Thanks for reading, all, and see you tomorrow…

Till the Clouds Roll By is available on DVD from Amazon.

The Atticus and Boo BlogathonOctober 2nd, 2020
6 days to go.