I’m more of an Irving Berlin fan than a Cole Porter fan, to be honest, but I still like quite a few Porter songs. They’re very catchy and endlessly singable, many with graceful, almost operatic melodies. Porter’s 1946 biopic, Night and Day, is a delightful, almost non-stop revue of Porter’s catalogue, set against the backdrop of his relationship with his wife, Laura Lee.

The year is 1914 and the place is Yale University. Monty Wooley (playing himself) is called up before the Board of the College of Law. He’s been spending too much time on musical and theatrical pursuits, and if he doesn’t repent of his scalawag ways, he will face discipline, putting his professorship in jeorpardy. Monty doesn’t care, though, and keeps on his merry way, emceeing the Football Fight Song Contest.

Fellow scalawag Cole Porter (Cary Grant) is at the Follies accompanying Gracie Harris (Jane Wyman) on the piano as she sings his new song, “I’m In Love Again.” Cole has plenty of time to race over and lead a choir in singing his entry for the contest. Spoiler alert: Cole wins, and his song is still sung today. Yale mascot Dan smiles over a montage of Yale trouncing every school in the Ivy League.

Cole goes home to Indiana for Christmas, where his family is having a huge opulent celebration, and among the guests are his cousin, Nancy (Dorothy Malone) and her roommate, Linda Lee (Alexis Smith). 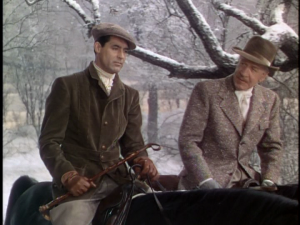 During a horseback ride with his grandpa (Omar Cole), Cole’s reminded of his responsibility to become a lawyer and handle the family affairs. Cole’s not kidding himself, though. He’s supposed to be studying law, but his heart isn’t in it. He goes back to Yale, but he looks to put on a show, See America First. If it seems like he’s riding George M.’s coattails with this show, it’s because he is. The only reason they can get anyone to back the show is Monty playing the Yale Man card, which carries a lot of weight with the society types, even if the Yale Man never studied and then dropped out.

The show opens to a full house, but has the bad luck of falling on the night news breaks of the Lusitania sinking. That, and the audience seems bored. People just walk out, and the show is a flop. Linda gives Cole an engraved cigarette case before they bravely head to the afterparty. 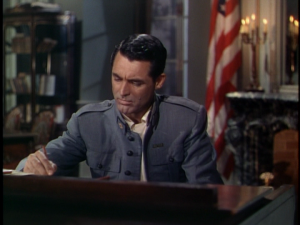 Linda Lee and Cole meet overseas during the First World War. Cole joins the French army, and when he’s wounded, Linda Lee happens to be his nurse. She’s concerned about his morale, so she has a baby grand piano brought in. Cole parks himself behind it as much as possible, writing like crazy.

Then Linda Lee takes things a step further. She convinces Gabrielle (Eve Arden), a famous French singer, to introduce Cole’s song, “I’m Unlucky In Love.” Once again, the audience is bored, some of them even reading newspapers while Gabrielle sings. Ouch. 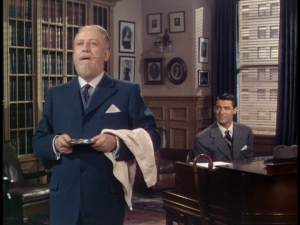 Cole goes back to America while Linda Lee stays overseas, working at an orphanage in England. Making another stab at the theater world, Cole and Monty pitch Cole’s songs to producers, and once again, everyone’s bored.

Fortunately, two producers care enough to be honest, and they tell Cole his songs are innovative and musically competent, but they’re too upper-crust and lack heart. People need to be able to relate to them. Cole needs to get out among regular people and listen to what they have to say. Monty lands himself a job, though, as a member of the chorus of a Russian-themed show. The producers like his beard, and it’s fifty dollars a week.

Cole becomes a song plugger on Tin Pan Alley, accompanying the gorgeous Carole (Ginny Simms). Carole is a nice lady who’s very interested in Cole’s writing, and on their lunch break she asks him to play one of his new ones, “What Is This Thing Called Love?” The two of them draw a crowd and rapturous applause.

Carole and Cole high-tail it over to the theater to tell Monty about Cole’s big breakthrough. Monty happily plops his bearskin on a hapless bystander and leaves with Cole and Carole.

From here on, there’s nothing stopping Cole, as he suddenly becomes a name. He installs Carole as a featured vocalist and brings Gracie back to dance in the chorus. It seems like a comedown, but she’s very happy to be one of the chorus, and it frees her up to make the rounds among New York’s millionaire set. To her, they’re all a bunch of good guys named Peaches.

Cole soon gets a call from a British producer to come over to England and put on his show there. He jumps at the chance, of course, and also by chance, runs into one Linda Lee in a London park. When he sees all the orphan kids around her, he mistakenly thinks they’re hers, but she soon sets him straight, and Cole and Linda get married.

Despite promises to get away and take a vacation, Cole is all about work. His and Linda’s house on Long Island is a melee of dancing girls, Carole singing, and endless rehearsal. It only takes one too many broken pledges to get Linda out the door.

Cole’s life takes another unfortunate turn when a fall from a horse makes him a paraplegic. He endures over two-dozen surgeries and constant pain, but the show must go on, and it’s anyone’s guess how many more Porter classics will be crammed in before the ending credits.

There’s so much fun in this movie that it’s easy to forget that some major points were fictionalized. Porter’s life was considerably condensed and idealized, but the film is light on plot and so crowded with music that it’s barely noticeable. He never fought with the French, and Monty was his classmate, not his professor.

The relationship between Cole and Linda Lee was probably the biggest change. It was well-known in entertainment circles that Cole Porter’s marriage was a sham, as the man was gay. He and Linda married out of convenience. He saw her as a meal ticket; she saw him as a ticket to the red carpet. Linda wasn’t an ingenue with a shiny halo, either; instead, she was eight years older than Porter and wealthy in her own right. She was also divorced. She and Cole didn’t hate each other; they were actually good friends, but it wasn’t a marriage in the love match sense. Linda died in 1954. 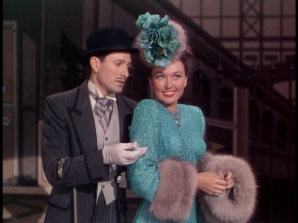 Night and Day fictionalized Porter’s story so effectively that Porter himself noted after viewing it that nothing in the film was true. The movie is a vigorous confection, with Cary Grant doing his own singing, and not terribly, either. His vibrato tends to wiggle like a goat bleating, but he pleasantly gets by.

The timing of the film was fortuitous, as Cole Porter was a big favorite among Second World War servicemen, as was Ginny Simms, who did numerous tours and camp shows, as well as being a frequent contributor on Command Performance. Night and Day is also one of Mary Martin’s rare film appearances, and she recreated her debut in Night and Day, singing “My Heart Belongs To Daddy.” She’s only onscreen for about ten minutes, but it’s plenty of time to see why the woman was a phenom.

Night and Day may have been fiction, but it’s satisfying, enjoyable fiction, doing Cole Porter proud.

For more Broadway, please see our wonderful Day Two entries. Thanks for reading, all, and see you tomorrow with my third and last biopic…

Night and Day is available to own on DVD from Amazon.

Sometimes you just gotta party, and sometimes only ska will do.