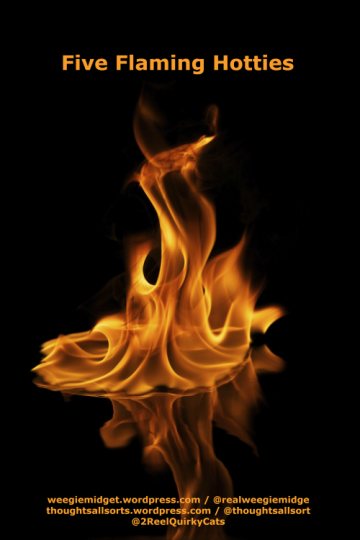 A couple of years ago, Gill at Realweegiemidget Reviews and Catherine at Thoughts All Sorts did a Five Flaming Hotties tag, and Gill decided to resurrect it. She’s tossed the idea around a few times on Twitter, so I thought I’d have a list ready. I think it speaks for itself, so here it is.

First of all, though, let’s look at the rules (paraphrased from Gill’s post):

All righty, let’s get started…

Kirk was my first celebrity crush. I was twelve and I had just seen 20,000 Leagues Under the Sea. Kirk had me at “Whale of A Tale,” where he sang of what sailors have stereotypically been famous for throughout history…having a girl in every port.

Kirk’s Ned Land was daring and cocky, but he was more principled than he gave himself credit for. He went from defying Captain Nemo for keeping he, the professor, and Conseil prisoner to saving the captain from a giant squid. Nemo asked him why he had done it, and Ned’s reply was, “That’s a good question.” I loved the way he stood up to Nemo and stayed true to himself despite the odds. The constant twinkle in his eye and those dimples didn’t hurt, either.

Anyway, my thing for Kirk Douglas lasted until I found out he had a grandson just about my age, and nothing puts a pin in a crush like a dose of reality. Still, I’ve always had a certain fondness for Kirk because he was my Neil Armstrong of celeb crushes. And he’s Kirk Douglas. Come on. 🙂

I’ll be honest; my opinion of Christian Slater wasn’t the best at first. When he made Gleaming the Cube and Pump Up the Volume, I thought he looked like a frog. When he made Robin Hood: Prince of Thieves, the frog had become a prince. Christian as Will Scarlett was a bad boy who was secretly lonely and resentful of the hand he had been dealt. I wanted him to find a home. I wanted him to find me, so much so that I wrote myself into my own version of the movie. Embarrassing, I know, and a little odd for the time, seeing as fanfic wasn’t really a thing in 1991.

My crush was short-lived, though, because Christian’s next movie was Mobsters, and being fourteen going on fifteen it was way above my pay-grade. Still, I enjoyed rewatching Robin Hood once it came to video, and like a visit with Will Scarlett now and then even as an adult.

Quickly following Christian was Sean Patrick Flanery. Remember him? It took watching only one episode of The Young Indiana Jones Chronicles to get me hooked on this fella. His smile is totally captivating, he seems like a very normal, down-to earth guy, he blogs, and he’s into Brazilian Jiu Jitsu. Wow. After Young Indiana ended, I tried to see every movie of Sean’s that I could, and while some of them weren’t the greatest, I didn’t mind, because it was Sean. He got his own fanfic, in which his Young Indy and I got trapped in one of the fallout shelters at my  high school. I was a weird kid, you guys.

Like most people in the world, I first encountered Orlando Bloom as Legolas in Lord of the Rings: The Fellowship of the Ring. I remember sitting in the movie theater with a big group of friends, and when Legolas showed up in Rivendell, I was mesmerized. My friend, Tim, thought my face was hilarious, especially after I dreamily asked him, “Who’s that guy?”

Tim told me, and then, knowing my taste in men, added, “He’s got a mohawk.”

“Uh huh,” I replied, still floating. Orlando could have had Chia plants growing out of his head and I wouldn’t have cared.

I think the thing that drew me to Orlando Bloom was not only that he’s incredibly cute, but I liked the way his eyes crinkled up when he smiled. And he has always done earnestness well. That sincerity was exactly what I needed at that point in my life, because it kept me from settling. Funnily enough, a couple of months after that first LOTR viewing, my now-husband and I started dating. Yep, things move fast when priorities are where they should be.

I know I’ve said it before, but this guy makes me smile. Jimmy Stewart is truly evergreen. He’s got an open face and a goofy grin, and I always felt he was someone who looked dependable. Some people might call that boring, but bad boys do lose their appeal eventually. Anyway, Jimmy did have his dark side, as was shown so effectively in films such as Rope and It’s A Wonderful Life, but it was an appealing kind of dark. The cliche goes that nice guys always finish last, but my thing for Jimmy has never finished.

And here’s that bonus hottie, because I can… 😉

OK, yes, I do need to say more. I love watching Swayze dance, and no, it isn’t necessarily because of his derriere. Had he not been injured during his ballet days, and had Hollywood made more musicals during his heyday, Swayze could have easily been the Gene Kelly of film ballet. The guy was the real deal.

And now, the moment we’ve all been waiting for…I hereby nominate these wonderful bloggers:

Thanks for bringing this back, Gill! Thanks for reading, all, and see you tomorrow with that Origins post I promised…

11 thoughts on “My Five Flaming Hotties (Plus A Bonus!)”

The original and (I think) the best.

Since today is the anniversary of the arrest at the Secret Annex, this month's "Page To Screen" is "Anne Frank Remembered" and the movie it spawned, "The Attic: The Hiding of Anne Frank." The book and movie not only fill out Anne's story, but Miep's as well. Link in bio. #blogsofinstagram #annefrankremembered #miepgies #jangies #annefrank #ottofrank #edithfrank #margotfrank #theatticthehidingofannefrank #marysteenburgen #paulscofield #eleanorbron #victorspinetti #tomwilkinson #lisajacobs #amsterdam #263prinsengracht #secretannex
Taking Up Room is going back to the opera with my new review of 1943's "Phantom of the Opera," starring Claude Rains, Susanna Foster and Nelson Eddy. Ever seen this movie? Link in bio. #blogsofinstagram #classichollywood #phantomoftheopera #clauderains #nelsoneddy #susannafoster
A little ice cream before we head home. For some reason my guys didn't want me taking their pictures. Oh well. 😀