When we last left Elle Woods (Reese Witherspoon), she was valedictorian of her class at Harvard Law School, with a promising career ahead of her.

Yeahhhh, that was 2001. In 2003, Elle got a sequel: Legally Blonde 2: Red, White, and Blonde. It’s cute. A little too cute, actually. Where the original Legally Blonde was smart and sassy, its sequel is ditzy and dull. Supposedly it’s modeled after the perennial classic, Mr. Smith Goes To Washington, but that comparison is a wee bit cheeky and presumptuous.

The film opens with Elle engaged to Emmett (Luke Wilson). Paulette (Jennifer Coolidge), Margot (Jessica Cauffiel) and Serena (Alanna Ubach) have given her a wedding shower, she’s a star at her law firm, and she and Emmett are getting married at Fenway Park.

Cue suspension of disbelief. And don’t un-cue it. Trust me on this one.

Elle wants to send Bruiser’s mother a wedding invitation (!), so she goes to a private detective to find her. The dog is a test subject at a company owned by C’est Magnifique, which Elle’s law firm represents. Elle wants the partners to lean on them to free the animals, so at her annual review meeting she presents a slide show of Bruiser detailing his longing to find his mother.

Shots of Bruiser dealing Three-Card Monty and selling maps to movie stars’ homes fail to win over the partners, and Elle is fired. Her slump doesn’t last long, though, because soon she’s on to her next project: Making animal testing for cosmetics illegal. She’s going to Washington! There just happens to be a job waiting for her, too, and a swanky apartment at the Wellington courtesy of her Delta Nu connections.

Her new co-workers at Congresswoman Victoria Rudd’s (Sally Field) office regard Elle with amusement, dubbing her “Capitol Barbie.” They have to tolerate her, though, because Victoria says so. 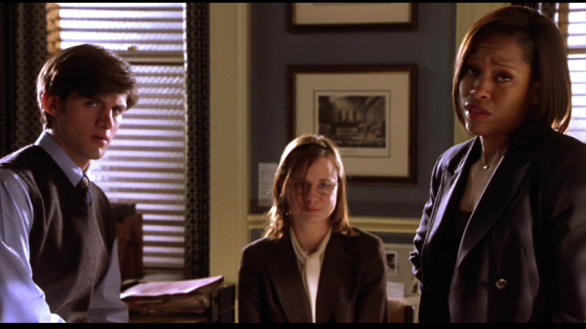 Elle being Elle, she decorates her desk with pink bunting and tulle and whips out the Snap Cup to get her co-workers into a warm and fuzzy mood. Write compliments on slips of paper, make nice with each other, and it’s all good. They’re not interested, however, and that evening Elle walks into the Wellington looking all haggard and depressed.

It doesn’t take long for Elle to make friends, though, the first being Sid (Bob Newhart), the doorman at the Wellington. He knows everything about everyone in Washington, and he’s willing to share it. He’s also a fount of knowledge about which flowers Elle should pick for her wedding bouquet. 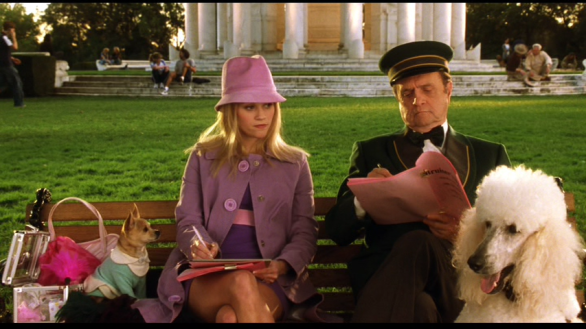 Elle finds that Washington is a strange place. People she thinks are her allies may not be, and people who seem to loathe her become her best friends. Then there are the minefields of day-to-day politics and elusive public opinion. If there’s anything to be said for Elle Woods, she does know how to rise to the occasion.

After Elle and Sid meet, though, the movie goes from silly to annoying, and can be summed up in five easy points:

It lamely recycles schtick from its predecessor.

This can be done successfully, as was demonstrated in the Back To the Future franchise, and repeated bits were inevitable in Legally Blonde’s sequel. The Bend and Snap, for instance, had to brought back for an encore, even if it was just in a scrapbook. Elle’s love of pink? No brainer.

Other stuff? Not so much. Does Stanford Marks’ and Libby Hauser’s discharge petition need to be pink and scented? Maybe, but it feels disposable.

Blonde 2 also shows Elle’s co-workers taking bets on how long Elle’s going to last in Washington. This was a takeoff of a deleted scene from the first movie that had been discarded because the producers thought it was too immature. Tacky, folks.

In order to put her animal testing bill over, Elle has to make friends with the members of the Committee of Energy and Commerce. One of them is Stanford Marks (Bruce McGill), a pro-gun Republican and a tough sell. Elle sees him chewing out a panhandler in a park, and slips the homeless man a twenty, remarking to herself, “People here have no common courtesy.”

Yeah, not good. It shows how kindhearted Elle is, but it’s really naïve of the filmmakers to handle the situation this way. One, it’s a bad idea to open one’s wallet or purse on the street, especially in front of a panhandler. Two, one of the biggest rules of charity is that panhandlers and homeless people should never be given cash, because they might be junkies or recovering addicts. It’s better to offer them a sandwich or something.

The characters get dopey. 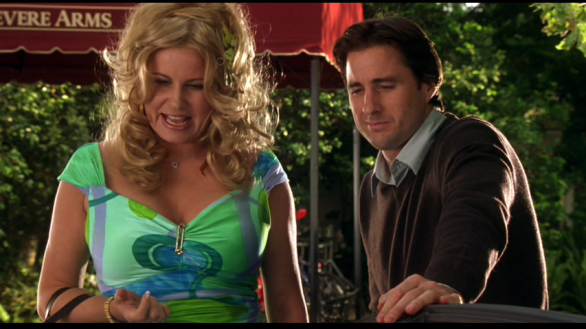 Karen McCullah and Kirsten Smith, the screenwriters of the first Legally Blonde, wrote the characters as three-dimensional people with brains. This didn’t carry over into the second film, which they were unavailable for, and the result was dismal. Emmett and Paulette’s fall from intelligence bugged me the most for some reason.

Emmett was Elle’s equal in the first movie. They match wits, he mentors her, and they butt heads on a mild level. In the sequel, he’s doggedly supportive to the point of being a beta male. While beta males have their place, it’s a comedown for his character.

Paulette fares the worst of all. In the first scene, she puts Elle’s snow globe up to her ear and says, “I can hear the ocean.” Except for a few moments of intelligence, she’s reduced to following in Elle’s pink-carpeted wake. It’s a shame, seeing as in the first movie she had a lot of sass and bite.

The writing has a generally unfortunate quality.

Put it this way: The characters spend about a third of the movie cocking their heads or otherwise looking uncomfortable. That’s a bad sign. The most awkward moment of all is when Paulette arrives in Washington and asks, “Who’s ready to discharge?”

You all know I don’t like getting political on here because it tends to alienate people (paging Taylor Swift), but my last beef about this movie is the rather ham-fisted way it handles Capitol Hill.

It’s no secret that Hollywood leans Democrat, and Legally Blonde 2 does as well. In its favor, it doesn’t get mean-spirited, and it does point towards bipartisanship (Snap Cup, anyone?) and using one’s voice. On the other hand, it spouts the tired and false stereotypes that Republicans are crazy gun-toting meanies who want to give tax breaks to the wealthy. Plus, Elle flinches when she says the word, “conservative,” and the Constitution is never mentioned. Ugh. It could be worse, I guess.

Bottom line: Legally Blonde 2 tried hard, and had its heart in the right place, but it fell short in the execution. It was an unfortunate end to one of the more memorable characters to come out of the early 2000s.

That does it for my Day Two post. More entries from our lovely participants can be found here, of course. Hope you enjoy…

Legally Blonde 2 is available on DVD from Amazon.

10 thoughts on “Elle Goes to the Hill”

Anyone seen "King Richard"? What did you think? I have, finally, and I have thoughts. Link in bio. #blogsofinstagram #kingrichard #willsmith #aunjanueellis #demisingleton #danielelawson #saniyyasidney #serenawilliams #venuswilliams #richardwilliams
Taking Up Room turns six today...can you believe it? I sure can't. Click the link in my bio to read a wee birthday post and have some virtual cake. #blogsofinstagram #takinguproom
December's Page To Screen is the 80s classic, "The Neverending Story." Who else loves this movie? Click the link in my bio to see how this fantasy came to be and why its novel's author, Michael Ende didn't want anything to do with the movie. #blogsofinstagram #theneverendingstory #noahhathaway #barretoliver #tamistronach #michaelend