Happy New Year, everyone! How were your holidays? My son has a few days of vacation left before the rat race starts again, and we’re savoring these last little bits of carefree non-scheduled time. Lots of binging on DVDs, for one thing. And Sims 3. Anywhoo…

As we’ve talked about before, Hollywood had to get creative while its male stars were overseas fighting. Broadway was no different–its women had to step up, too. One instance of this was the Allen R. Kenward play. Cry ‘Havoc.’ Sorta.

Cry ‘Havoc’ doesn’t have the usual history of a play that’s been adapted for the big screen, not even close. There’s no ancillary material or story behind the play. It seemed to come out of nowhere, except for its topical subject matter. It first premiered on the stage in Los Angeles in September of 1942, as well as on Broadway under the title, Proof Thro’ the Night. Both runs bombed. The Broadway version only ran for ten performances, from December 25, 1942 until January 2, 1943, in spite of a stellar cast that included Carole Channing and Ann Shoemaker.

MGM bought the film rights anyway, and shooting commenced, taking place between May and June of 1943, with a couple of odd days in July and September. According to TCM, there didn’t seem to be any on-set drama between the cast, who were mostly used to playing romantic leads. Also according to TCM, Cry ‘Havoc’ likely utilized sets from Bataan, since the two movies were being filmed at the same time.

The movie opens at an Army hospital on the Bataan peninsula. Lt. Smith, or “Smitty” (Margaret Sullavan) is second in command over a post that’s overflowing with patients but very short on supplies and nurses. Her commanding officer, Captain Marsh (Fay Bainter) knows Smitty is also battling malignant malaria, and talks about shipping her off to Corregidor, where she can get transportation to Australia. Smitty is adamant: She won’t go unless it’s an order.

Meanwhile, there’s the matter of securing more supplies from Mariveles and that means sending Flo (Marsha Hunt) off in the temperamental Army truck. She’s not only to scrounge up as much food and medicine as possible, but to bring back some of the refugees as extra help for the hospital.

Flo succeeds in procuring rice, dried fruit, some medicines…and nine refugees. They’re quite a motley crew. Pat (Ann Sothern) is a blue-collar worker hailing from New York. Grace (Joan Blondell) worked in burlesque as a stripper. Connie (Ella Raines) was a fashion writer for the Manila Telegram. Steve (Gloria Grafton) was a supervisor at a Manila cannery. Nydia (Diana Lewis) is a lady from Alabama who came looking for her fiancé. Rosita (Fely Franquelli) lives in Mariveles. Sisters Susan (Dorothy Morris) and Andra (Heather Angel) are students of art and music, respectively. Helen (Frances Gifford) is a PBX switchboard operator.

The group finds out right away what they’re up against. Captain Marsh tells them that the work will be distasteful, but it’s imperative that the Bataan Peninsula hold. They’re also just tucking into a meal of horse meat hash and rice when the Japanese start bombing. Everyone is jittery except for Flo, who points at the lantern hanging from the ceiling. “You don’t need to worry until that lamp starts doing a rhumba,” she says.

Andra has her own reason to worry, because Susan went outside to have a look around and went missing when the bombs dropped. In between nursing, she spends dogged days looking for her sister, who is finally found in a foxhole, where she has been trapped next to the bodies of dead soldiers. Susan is never the same after that, suffering from severe PTSD. 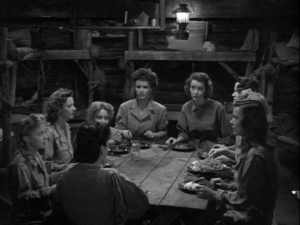 The ladies’ days revolve around manning the switchboard and serving in the wards while enduring bombing runs. They take care of soldiers who are near death, most of them very young. They have to go through personal effects to catalogue them and send them home to deceased soldiers’ families.

That’s not to say the group is without diversion. Pat has her eye on Lieutenant Holt, whose office is in the communications shack, but she can’t get to first base with him and can’t figure out why, except that there’s an air of secrecy about him. They also find that Nydia has a full bottle of brandy in her suitcase, which gives everyone a much-needed bracing. Other than that, the group plugs along while the noose around the Bataan Peninsula gets tighter and tighter.

Every day without fail, each lady has to take some quinine from the bottle on the table in their dugout, and as the bottle empties, it’s like time running out. The song, “Blues In the Night” is whistled and hummed by two of the characters like a motif, and its tale of two-facedness lends a melancholy irony to the story.

It’s not really a spoiler to say that our heroines go the way of the vast majority of Americans who were in the Pacific during the war, and history shows how much worse that got before it got better.

MGM didn’t make many changes when adapting Cry ‘Havoc’ for the screen. The play mentions Flo bringing back sixteen nurses instead of the nine shown in the film, but they’re only alluded to. The biggest tweak is that the play had a subplot about a spy among the group who was broadcasting information to the enemy. It’s very likely the filmmakers thought the story was tragic enough without it.

Well, there was one big difference no one saw coming, including the Hays Office. Cry ‘Havoc’ has the distinction of being the one Production Code Era film to feature nudity. Inadvertant nudity, but still nudity nonetheless. Put it this way: there’s a scene where Connie, Nydia, and Rosita go swimming, and Connie’s bikini top is just a little too see-through. Considering how meticulous the Hays Office was about upholding the Code, it’s amazing they missed this very obvious blunder. 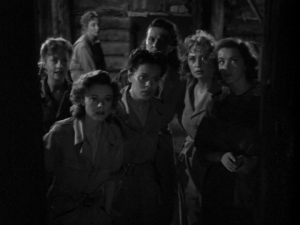 Cry ‘Havoc’ was well-received by the public, many of whom had personal connections to events in the Pacific. However, while it had plenty of feminine star wattage, the overall result was a bit weak. Film historians and critics such as Leonard Maltin and John Douglas Eames have noted that the film looks like a play rather than the movie, and this is true. Most plays adapted for the screen are taken outside, whereas Cry ‘Havoc’ mainly takes place in the ladies’ dugout. Eames also said that it looked as if the ladies had found a beauty salon on Bataan.

The play, while not initially successful, has been revived off and on over the years, one of the most recent being the 2009 Gallery Theater production in Anaheim Hills. Unfortunately, it was criticized for lacking grit and tension, and the OC Register said its wartime story was clichéd.

That’s the main problem I see with Cry ‘Havoc’. We now have seventy-five years’ worth of hindsight between us and the events it portrays. We know what happened in the Pacific and who won, while 1944 audiences didn’t, which deflates the suspense somewhat. However, the film is an interesting one with deft performances by an excellent cast, and is a good example of what both Hollywood and Broadway were producing while there was a shortage of men.

Our first blogathon of 2019 is this weekend, and I hope you’ll check back then. Thanks for reading, all…

The Atticus and Boo BlogathonOctober 2nd, 2020
9 days to go.