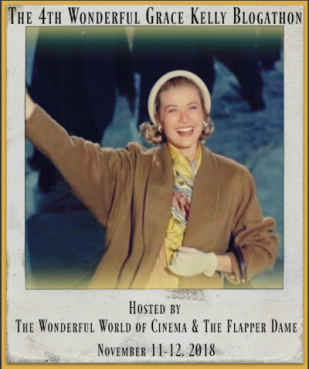 Grace Kelly’s third movie was 1953’s Mogambo, co-starring Clark Gable and Ava Gardner. Set in the French Congo, it was a remake of the 1932 film, Red Dust. The story was a daring choice for Kelly, but it paid off.

Victor Marswell (Clark Gable) is a big game hunter living in the African bush. He’s all business, taking anthropologists and various others on safari. He doesn’t even want to fly into Nairobi for vacation. He’s too busy trapping rhinos and shooting panthers and sending them upriver to sell.

Everything is exciting though placid, and then Eloise “Honey Bear” Kelly (Ava Gardner) shows up. Victor spies her taking a shower and wants an explanation, to which Honey Bear purrs that she’s come to see the maharaja. Victor tells Honey Bear that the maharajah decided to stay in India because of civil unrest. Derp. 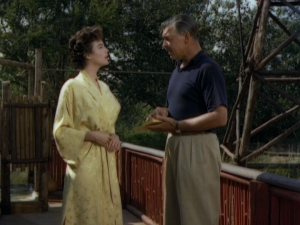 Honey Bear now has to wait until the next boat comes through to take her back to civilization, and until then she makes herself right at home. She’s a war widow and a Sadie Thompson type, only not as loud and brassy. Honey Bear makes friends with the baby elephant and noodles around on the player piano. She sashays down the rows of cages talking to the animals, and, amazingly enough, her stilletto-clad toes never get dusty. She and Victor have a snappy chemistry that seems like it has real potential.

Victor finds her intriguing, of course, especially when she freaks out at the sight of Joe, the outpost’s friendly boa constrictor, but when the next boat arrives he loses no time in sending her off. Honey Bear is pretty ticked, and paces the deck of the little river boat like a caged animal. 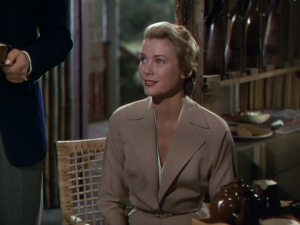 Meanwhile, Donald and Linda Nordley (Donald Sinden and Grace Kelly) arrive to go on safari. They want to see the gorillas. Victor’s not real gung-ho about that, but he promises one of his men will do it and puts the Nordleys in Honey Bear’s old room. They’re barely in the room when Donald has a reaction to a tsetse fly inoculation. Victor administers quinine and Linda waits it out. He makes a pass at Linda even though she’s married, and she slaps him.

As if things aren’t hopping fast enough, Honey Bear comes back. Her boat ran aground on a sand bar and Victor’s outpost is the closest settlement. She and the Nordleys get friendly, especially when she and Donald have a chummy time at the piano. Victor changes his mind about taking the Nordleys up to the gorillas, and Honey Bear’s going to go as far as another bush station, where she can catch transportation home. One of the foremen, Brownie (Philip Stainton) notices Victor’s ardor, and warns him not to mess with the Nordleys because they’re a nice couple. 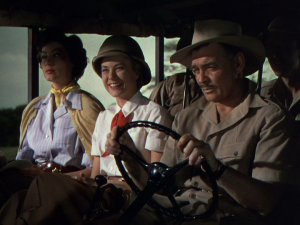 Linda is very curious the whole journey about all the wildlife and customs they encounter along the river, while Honey Bear is jaded. Like Brownie, Honey Bear thinks there’s something not quite right about the Nordleys’ marriage, and at one stop confesses her sins to a priest. She’s all set to be friends with Linda, who’s very defensive at the idea of someone insinuating she’s not really in love with her husband.

When the party arrives at the District Commissioner’s office where they’re supposed to leave Honey Bear, they find the village is basically on lockdown. They were raided by ivory poachers and most of the men have died. The commissioner is wounded, so Victor and the party want to take him along. The commissioner says he’s done for and to get the women out of there as quickly as possible. 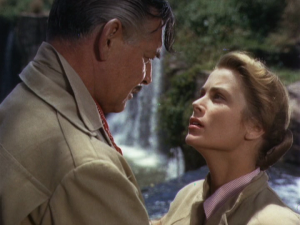 Linda’s fascination with Africa evaporates when she gets a little too close to a gorilla, which scares the jeepers out of her. She can’t sleep at night, either. It might be the night noises, or something else. She and Victor take a walk, and Victor kisses her on the river bank. This might have been an opportune time for Linda to slap him again, but she kisses him back. When she finally goes to her tent that night, she’s as jumpy as a cat and Donald can’t touch her. Linda and Victor are now in a tight spot, but adultery has a way of doing that to people.

Mogambo was a heavy departure from its predecessor, and since it was subject to the Production Code, toned down considerably. In Red Dust, Ava Gardner’s character is a prostitute, Grace Kelly is the wife of an engineer, and Clark Gable’s character has much more time to develop these relationships. It also took place in Indochina instead of Kenya. The changes weren’t enough for some, and in certain countries Linda and Donald were portrayed as brother and sister instead of as husband and wife. It made them sharing a bed at the beginning of the film a wee bit problematic, but yeah, the adultery angle was obviously dealt with. 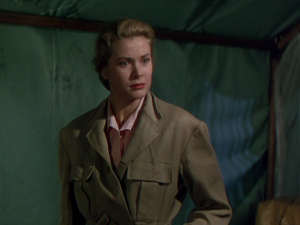 Grace Kelly’s ardor for Clark Gable was real. She was absolutely gaga for him. Film historians are divided on what their relationship was really like, however. Some say that Gable didn’t want to be involved with someone who was so much younger than he was, but others say that the two did have an affair. The film allowed her to play a more sexual character than she had done in her previous two movies, which she built on later in her career. Mogambo put her on the path to becoming a legend, netting her a Golden Globe Award and an Oscar nomination for Best Supporting Actress.

I have mixed feelings about Mogambo. On one hand, the footage of the tundra is gorgeous (in fact, the trip to Africa was what convinced Kelly to take the role of Linda), but I had real trouble buying Gable as a young lothario. He was fifty-two when the film was made and shaky from heavy drinking, but Mogambo portrays him as this young stallion. There’s even a scene when the tribesmen throw spears at him like he’s a knife thrower’s assistant in a circus. With his dress shirt off, no less. And no undershirt, of course. The film’s not-so-subtle message was “GABLE’S STILL GOT IT.” I liked his rapport with Ava Gardner, though–her hard-boiled toughness was an effective foil for Gable’s tenacious outdoorsman. 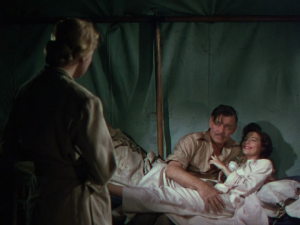 The public bought Mogambo, to the tune of $4.5 million dollars at the box office, and the film still holds up today, as an example of Grace Kelly’s early career and Gable’s later one, not to mention Ava Gardner in her prime.

For more of the lovely Grace, please visit Virginie at The Wonderful World of Cinema and Emily at The Flapper Dame. Thanks for hosting, ladies–it was fun! Thanks for reading, everyone, and see you on Friday for the Greatest Movie I’ve Never Seen Blogathon…

This movie is available on Amazon.

8 thoughts on “Down In Africa”

Remember "House of Flying Daggers"? Taking Up Room looks back at this Chinese spectacle today. Link in bio. #blogsofinstagram #houseofflyingdaggers #ziyizhang #andylao #dandansong #takeshikaneshiro
Hope everyone is having a sweet Mother's Day! 😊 #happymothersday❤️
Never thought I would say this, but I have a Patreon account! Click the link in my bio for more info. #blogsofinstagram #patreon #patreoncreator