Mmmmm…chocolate. Chocolate mixed with shame might be a different story, though. Here’s the link to Cinema Shame for those of you who would like to know why this post is called a Shamedown. Previous Shamedowns can be found here.

The idea of a cook’s mood going into their food is certainly nothing new. It’s a classic move to impress a date with a homemade meal, for instance. For storytellers, food as magic is tempting plot fodder and 1992’s Like Water For Chocolate is one of those. Well, it tries to be, anyway.

The film is based on Laura Esquivel’s 1989 novel of the same name, and she also wrote the screenplay. It was an extra credit assignment in my freshman Spanish class in high school, and we had the option of either reading the book or watching the movie. A lot of my classmates opted to watch the movie, and now that I’ve finally seen it, I can see why. What high school kid is going to pass up the opportunity to see an R-rated movie? With a fair amount of nudity? Especially if it’s for school? It’s the perfect crime.

I read the book, though, because my parents would have never gone for me seeing the film, and the book kind of weirded me out. As an adult, I was curious to revisit both the book and the film to see what had bugged me in high school, and now I know.

A young lady is tearfully chopping onions in her kitchen and talking about her Great-aunt Tita, who was also sensitive to onions. To prevent crying from chopping onions, it’s always best to place a piece on one’s head. Uh huh.

Then we see the kitchen at her grandparents’ ranch during the Mexican Revolution, where her very pregnant grandmother, Doña Elena (Regina Tomé), is chopping onions. She suddenly goes into labor, and gives birth to Tita on the kitchen table. For some reason, the kitchen is overflowing with tears, which turn into rock salt. The cook, Nacha (Ada Carrasco) sweeps it all up and puts it in a burlap sack. Elena can’t nurse her baby, so Nacha feeds her broth and tea. 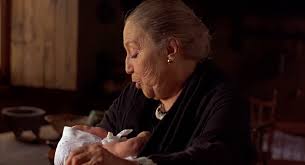 Elena’s husband is initially excited about having another daughter, but when a friend insinuates to him that his oldest, Gertrudis, isn’t really his, he has a heart attack and dies.

Tita (Luvi Cavazos) is the youngest of three daughters, and as is traditional in her mother’s family, she’s supposed to stay unmarried take care of her mother in her old age. Her mother is a harsh taskmaster and a constant buzzkill who treats her daughter like a hired hand. Nacha raises Tita and makes up for Elena’s meanness by giving her love and teaching her how to cook. Consequently, Tita is the most at home in the kitchen.

As Tita gets older, she meets a young man named Pedro (Marco Leonardi), and they fall passionately in love. Naturally, they want to marry, and naturally, Mama Buzzkill refuses. Instead, Pedro promises to marry Tita’s sister, Rosaura (Yareli Arizmendi), which everyone except Elena thinks is crazy. Pedro, however, has an altruistic motive: He’s only marrying Rosaura to be close to Tita.

Pedro and Rosaura’s wedding day approaches, with Nacha and Tita in charge of catering. Tita is beside herself with grief, and as she forlornly stirs the batter for the wedding cake, some of her tears fall in. Nacha sends Tita to bed.

At the wedding, everything seems to be going swimmingly…until the wedding cake is served. Strange looks cross everyone’s faces. They feel depressed, frustrated, and then they make a mad dash for the river, where they all throw up. Elena accuses Tita of sabotaging the wedding cake, but they discover that Nacha is dead. She ate some of the cake, and it made her so lonesome for her husband that she died of a broken heart. Tita now has no buffer between she and her mother.

So yeah, tensions are running high. Tita is now solely in charge of the cooking (Rosaura tries it once and gives everyone the runs). There are lots of nods, looks and glances between Tita and Pedro, who find ways to get romantic in a veiled way. Pedro gives Tita roses as a compliment for her excellent cooking, and Tita uses them to make quails with rose sauce.

The effect is so sensuous that Tita’s other sister, Gertrudis (Claudette Maillé) runs out to the bathroom to take a shower because smoke is pouring out of her ears. While she’s in there, the building catches fire and some revolutionaries ride by, whereupon Gertrudis runs out in the all-together and is carried away by one of the men. Later on, it’s rumored Gertrudis is working at a brothel on the border, and Tita sends her a suitcase full of clothes and mementos.

Just wait, it gets weirder.

Although there’s nothing romantic about their relationship, Pedro and Rosaura have a son named Roberto. Rosaura can’t nurse him, and the local wet nurse has been waylaid by revolutionaries, so Tita does it. Yeah. She’s never had a baby, and she’s somehow able to feed the child. Pedro is incredibly grateful, of couse, and he, Tita, and Roberto make quite the familial picture.

Elena gets suspicious, and sends Pedro, Rosaura, and Roberto away. It’s not for good, though. Roberto starves to death, and Pedro and Rosaura come back. Tita blames Elena for Roberto’s death, though, and she has a breakdown. She ends up in the fetal position in the pigeon coop, and Chencha is the only one who goes to see her. Dr. Brown (Mario Ivan Martinez), the local doctor, takes her in, and Tita has her first experience of being out from under her mother’s thumb.

This sets up a chain of events which culminate in Tita not only shaking off her demons and Rosaura ending up obese and flatulent from Tita’s food, but Tita eating candles. Yes, she really does that, and no, it’s not a spoiler. I haven’t said why she’s eating candles.

To Americans like myself, this is a beyond-the-pale way to end a story. Yet to Mexican audiences it’s par for the course, as this film employs what’s called “magical realism,” which is a common device in Mexican literature. Simply put, magical realism is the idea that magic affects the world around us. Okeydokey. Eating candles is totes cool, then (Yeah, no, it isn’t. Don’t try it at home or anywhere else, kids).

The book is divided by months, with a recipe for each month, and the monthly divisions make the total package fairly straightforward. The movie, on the other hand, can’t decide if it wants to be linear or mimic the monthly installment format of the book. It feels random and disjointed, plus the main thread of the original story, cooking, is kind of an incidental. There were twelve recipes in the novel. In the film, Tita makes maybe three or four, and her projection through food is mostly passed over. Still, it does follow the story arc of the book pretty closely.

It’s interesting that the author of the novel, Laura Esquivel, who is also a screenwriter, didn’t seem to know what to do with her own material. However, this could be chalked up to the fact that the American version of the film was shortened from the Mexican release, and the snips appear to have been done with the proverbial hacksaw.

Now, the movie isn’t all bad. The acting is very natural, and the visuals are stunning. The music is great, and the film has some good humor here and there. It doesn’t, however, negate the strangeness. Magical realism is all well and good, and it does keep things unpredictable, but it’s tough to get past that ending. One one hand I’m glad I finally watched it, and on the other…meh. Maybe I should have listened to my high-school self, but hindsight, right?

OK, so we’re two for two with Eros-oriented movies this week. Not my preference, as you guys know, because I do like keeping things family-friendly, but it does make for passionate analysis. Tomorrow we venture back into classic film territory, and I hope to see you then! Thanks for reading…