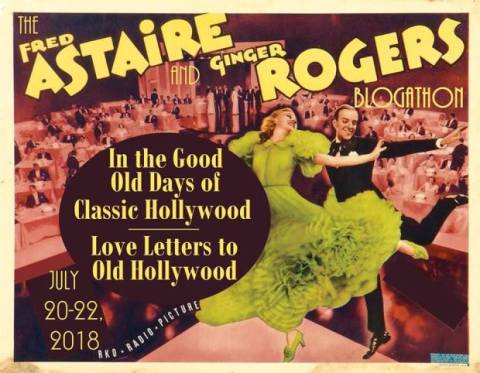 What hasn’t been said about these two? Fred Astaire and Ginger Rogers are the go-to’s of both pairs dancing and Hollywood musicals. One of these was 1936’s Swing Time, a light and airy film which was an escape for Depression-era audiences, as well as in the decades following.

The movie opens at a vaudeville show, and a dance troupe is tapping away onstage. Meanwhile, a magician, Pop Cardetti (Victor Moore) is backstage trying to get one of the stagehands interested in a card trick, but nothing doing, because it’s time for the curtain to come down. Pop is bored, though–the producer has decided that magic acts are passé, and he’s trying to fill his time.

Meanwhile, his buddy, Lucky Garnett (Fred Astaire) comes spinning off the stage and makes a beeline for the dressing room, because he’s late for his wedding. His fellow dancers don’t want him to leave, however. Since Lucky’s intended, Margaret (Betty Furness) is a society woman, they tell him he can’t get married in the trousers he’s wearing because they don’t have cuffs. Heh. Spoiler alert: They’re lying.

By the time Lucky shoots a few crap games to soothe his feelings, the guests have all gone home and the wedding’s off. However, Margaret’s dad cuts Lucky a deal. If he can go to New York and make $25,000 dollars, he can still marry Margaret.

Lucky goes to the train station, but his dancing buddies follow him, and decide all the money he won at craps is no longer his. Such nice fellas. That means Lucky’s got twenty-five cents to his name, and he does what any self-respecting broke person does: He hops a freight train. Pop follows him, because his magic act is out, anyway.

Once in New York, Lucky and Pop have to figure out what to do. Lucky’s still in his wedding cutaway, and Pop is in dire need of cigarettes. Pop is so desperate that he tries to shove a button into a cigarette machine, and Lucky asks a young woman (Ginger Rogers) for change for a quarter. She gives it to him, and Lucky and Pop stick it in there. The machine not only gives them cigarettes, but about a dollar in change.

So Lucky runs to get his quarter back from the lady, only she rebuffs him because she can’t find the quarter in her purse. Pop took it, but he doesn’t come clean until after the lady calls a cop, who calls her full of it.

To square himself, Lucky follows the lady into the dance academy where she’s an instructor, working with her Aunt Mabel (Helen Broderick). Her name is Penny Carroll, and she’s not too happy to see him. Naturally, Lucky pretends to know nothing about dance. Penny’s irritated at first, but Lucky wins her over, especially when he shows her what a quick study he is. Mr. Gordon (Eric Blore) thinks so too, and sets up an audition for Penny and Lucky with Mr. Simpson (Pierre Watkin), a producer.

Lucky tries to make it up to Penny by arranging an audition at Mr. Simpson’s club. They can’t dance, however, because not only is the bandleader, Ricky Romero (Georges Metaxa) jealous of Lucky, but Mr. Simpson gambled away Ricky’s contract. Long story short, Lucky wins the contract back, and he and Penny dazzle everyone.

Penny can’t figure out why Ricky doesn’t want to be alone with her, and Lucky tells Pop to stick by him. He’s still technically engaged to Margaret, and he can’t figure out how to tell Penny. Meanwhile, Penny and Aunt Mabel cook up a scheme to help Penny and Lucky pair off. 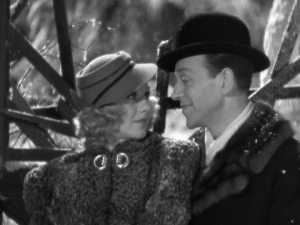 The four of them take a drive out to the New Amsterdam. No, not the theater, but a rundown house in the country. It’s snowing and picture perfect, and Penny feels romantic. Aunt Mabel does her part, and takes Pop to see where she used to fish in the summer. Pop does his part as well, calling for Lucky and throwing a snowball at his head just as he and Penny get closer.

While they’re still out in the country, Pop lets it slip that Lucky is engaged to Margaret, and Penny turns just as icy as the snow. It doesn’t last long, however. Back in New York, Ricky proposes to Penny, but she refuses. Then Aunt Mabel dares her to go kiss Lucky, and she doesn’t refuse. Too bad Margaret shows up and Lucky gets backed into a corner.

Swing Time is a gorgeous film. It isn’t heavy on plot and it doesn’t have to be. The production design is beautifully done up in the Art Deco style. The music is by Jerome Kern, so there are plenty of classic moments such as when Lucky sits down at the piano and plays “The Way You Look Tonight” while waiting for Penny. Penny is so entranced that she doesn’t care at first that she’s standing next to Lucky with a head full of shampoo.

Oh, Penny. And Lucky. Yes, I get the play on words. Lucky? Penny? *chortles*

I know I’m probably the billionth person to say this, but Fred and Ginger are incredible. They don’t just dance together; their dance furthers their characters. It’s not as if they turn off whatever emotions their characters feel just before the music starts. Instead, they carry into the dance as if the conversation is still going, which it is. That, combined with their utter artistry, are a small part of what makes them special and unique in film history.

That does it for my Day One. Crystal and Michaela have plenty more Fred and Ginger, with more on the way. Thanks for reading, everyone, and see you mañana!

17 thoughts on “I’ll Only Dance With You”

The Third So Bad It's Good Blogathon is still going, and Taking Up Room has murderous pinatas and mock-tastic alien robots for you, as well as links to a plethora of great posts by my lovely contributors. Link in bio. #blogsofinstagram #sobaditsgood #killerpinata #transmorphers #theasylum
The Third So Bad It's Good Blogathon is now live! We'll be bringing the badness all weekend on Taking Up Room, so click the link in my bio to see what's happening (And maybe read my review of "Journey To the Seventh Planet" while you're at it.). #blogsofinstagram #sobaditsgood #journeytotheseventhplanet #johnagar
Oh golly, I feel for this dude.