When Gill tweeted a bunch of us yesterday about Cinema Shame’s 2018 Shame List, I thought the idea was intriguing. Basically, participants would make time to watch films they’re ashamed to say they’ve never seen. I don’t know if I’m into the “shame” idea so much, though–I look at this more as an opportunity, and I have a ton of films just sitting on my Netflix list. This year, I will finally view them, and let you all in on it once a month. Eleven months, and eleven posts.

So. On to my Shame Statement. They’re listed in chronological order but probably won’t get posted that way: 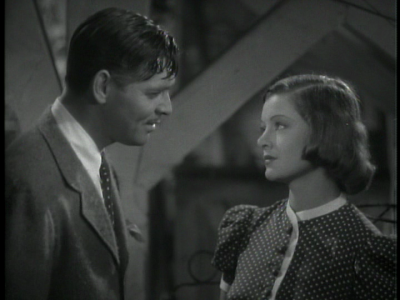 I got this film for my birthday, but it got buried under all the blogging and holiday craziness. It stars Clark Gable and Myrna Loy as an aerial photographer and pilot respectively. I’ve seen a few clips, but other than that, I have no idea what it’s going to be like.

That Night In Rio is a movie I recently bought with an Amazon card my in-laws gave me. It’s a crazy mix of Don Ameche in a double role, Alice Faye playing a baroness, and Carmen Miranda being Carmen Miranda, and looks pretty fun. I’m thinking this film will be my first “Shame” post, because Fox’s bright, colorful romps can be hard to resist.

OK, I might be pushing things with this one–The Memphis Belle is not only a documentary, but it’s only forty minutes long. Not technically a movie, at least length-wise. However, I’ve never seen it, and it’s been on my Netflix list forever, so there’s no time like the present, right? This is the film William Wyler took of the real Memphis Belle right before their twenty-fifth and last mission, and is part of the National Film Registry.

Sixties movies are a guilty pleasure for me. They don’t necessarily wind up being my favorites, but they’re fun to watch because of their inevitable campiness. Irwin Allen’s epic submarine voyage will probably have camp in spades, and not just because it features Barbara Eden before Jeannie and Frankie Avalon before Annette.

I don’t know why I’ve never seen The Longest Day. My dad is a war picture aficionado, and I’m sure he’s watched it, but I have no idea where I was at the time. Anyway, the film, which is about an American Army regiment during the D-day landings, looks interesting and I’m looking forward to experiencing it. Maybe I’ll even have my dad over. 🙂

I’m a big fan of Audrey Hepburn, so I’m eagerly anticipating watching How To Steal A Million. It seems to be on the same order as Charade, except that it involves priceless French sculpture instead of stamps. At least, that’s how it appears. Intrigue, intrigue.

I read Laura Esquivel’s Like Water For Chocolate for extra credit in my high school Spanish class. A lot of my classmates opted to see the movie as well, but I can’t remember why I never did. I think the book weirded me out too much for some reason. It’s over twenty years later, so who really knows, and now I want to see if my high school self was onto something.

I’ve always thought of Armageddon as Deep Impact‘s fancier cousin; at least, that’s how it seems to be. A meteor is heading towards Earth, astronauts decide to detonate an explosive inside it and blow it up, and so on. Sounds very familiar. I think when I finally get to watch this movie I just may do some comparing and contrasting.

As you all know, I’ve been a museum docent for many years (fifteen, as of 2017), and one of the time periods I’ve really had to study up on is the Victorian Era. The Young Victoria, starring Emily Blunt, is a movie I’ve always wanted to see, because I’m curious as to how they handle Victoria and her story, which is one of the most legendary in history.

This is a “I’ve seen the first two movies, so why not?” pick, and I’ll explain why when I review it. Anything more now will ruin things, if you get my drift.

Last but not least is Arrival. This film was recommended to me by my husband, and he knows me, so I think this is going to be a good one. Plus, I like Amy Adams, so I’m waiting to see what’s in store here. And yes, it’s another sci-fi flick. Can you tell I live in a house full of guys?

I’ve also made an unofficial banner so I can advertise this Shame thing, and anyone who wants to use it is welcome to:

Want to participate? Go to the Cinema Shame website for more details. 2018 is going to be a fun one, people! See you on Friday. 🙂

Melissa Muller presents a very full and fascinating look at Anne Frank, her family, and the time in which she lived. If you read any biography about the famed diarist, read this one. And maybe read it again because it’s that good.

Speakeasy - a movie blog
The Wonderful World of Cinema