You all know character actors rarely get famous. Most of the time they show up, and our response is something like, “Oh, it’s that person. What’s their name again?” That’s to be expected; I’ve heard it said that the sign of a good character actor is when audiences don’t know who they are. On the other hand, that’s not entirely fair–some character actors are so good that we can’t help but remember their names. For me, one of those is Eve Arden.

Eve was born in Mill Valley in 1908, and quit school when she was sixteen to become an actress. Her real name was Eunice Quedens, and she got the idea for her stage name from the contents of her vanity table. “Eve” came from the perfume, Evening In Paris and “Arden” was inspired by Elizabeth Arden, natch. She had a busy career, starting with the stage and then moving to Hollywood, where she made her debut in the 1929 film, The Song of Love. Arden also worked in radio, and as time went on focused more and more on television.

At first glance, Eve seems very imposing and no-nonsense. She could have played romantic leads, but she wasn’t the type to make moon eyes at every male she came across, at least not seriously. Eve knew how to play straight and comical at the same time, and while she may have been a supporting player, she had a way of scoring the best lines in any film she was in. More often than not Eve was welcome comic relief. She always seemed very steady and motherly to me as well.

I’ll be honest, though–I haven’t seen that many of Eve’s films. I remember seeing her on TV, such as The Love Boat, Faerie Tale Theatre, and on the Brown Derby episode of I Love Lucy, but as far as her filmography goes, I’m still working through her numerous credits.

Here’s what I’ve watched so far:

Eve plays Patsy Dixon, an aging showgirl who acts as a big sister to the newcomers. She’s always available for repartee in the dressing room: “You’ve got the right angle, honey–you marry for love! I did.” She’s a little bit jaded, and yawns during the producer, Mr. Slayton’s pep talk before the first show. Still, she knows enough to remind her alcoholic costar, Shiela (Lana Turner) that there’s life outside the New Amsterdam Theater: “At most, it’s only a few years out of your life, and then what have you got?” Eve’s part in the film is very small, and her commentary is missed after she’s ousted from the Follies. She’s not a prisoner in the dressing room, though–we do get to see her wear one of those nifty costumes. 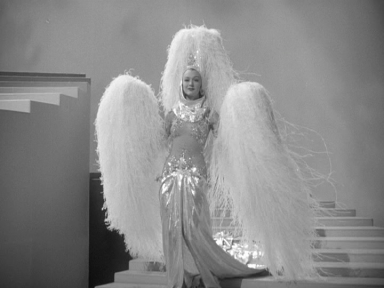 In Cover Girl, Eve is Cornelia Jackson, assistant to magazine magnate John Coudair and in charge of finding the new face of the magazine. Like Patsy Dixon, Cornelia is a wee bit jaded, as is to be expected from someone who’s been around, and tries not to be freaked out when Rita Hayworth’s character, Rusty Parker comes on a little too strong in her first interview, although she later calls her a “gland case.” Cornelia also has some integrity, and (spoiler alert!) ultimately shows that it’s more important for Rusty to be where she knows she belongs instead of where other people think she belongs. On a side note, Eve’s wardrobe in Cover Girl is fabulously high fashion–lots of feathers and jewel tones.

I’ll go into more particulars about this film on another day (it totally deserves it), but as for Eve, she plays Natalia Muskaroff, a Russian sergeant, and she is a riot. Her costars use her as a glorified gopher, sending her to the pawn shop when they get short of funds, but they can only keep her busy for so long. Among other things, Natalia has time to go on long, long walks and shoot some pigeons when her new baby sister is born. Eve had plenty to do here, and was obviously enjoying this part like a good sturgeon–the fun she was having was all over her face.

Eve plays Ida Corwin, who starts out introducing Mildred to the restaurant business, and ends up as her right-hand. Not only that, but she offers ironic commentary on the movie’s various dramas: “Personally, Veda’s convinced me that animals have the right idea. They eat their young.” I also like the part when Ida flirts with Mildred’s accountant: “It’s only because I want to be alone with you. Come ‘ere and let me bite you, you darling man! Ruff!”

Night and Day is a highly fictionalized biopic of Cole Porter. Arden makes a cameo as Gabrielle, a famous French singer who helps out Porter by performing one of his very early numbers. Her part is tiny once again, but this clip is unique because it is one of the few times that Arden sang onscreen. And yes, that’s her real voice.

Even character actors score lead roles now and then. Arden played the title character in this film–a high school English teacher in Madison, Wisconsin who’s dating the biology instructor. I saw it when I was in high school myself and thought it was hysterical. The film was the third iteration of the story: Our Miss Brooks started as a radio series, broadcasting from 1948 until 1957, and there was also a TV series, which ran simultaneously from 1952 to 1956. Miss Brooks was a busy lady.

I really wish Eve could have played more leads in films, but she herself wouldn’t have taken anything out of her career than what she got. In fact, this is how she saw her life:

I’ve worked with a lot of great glamorous girls in movies and the theater. And I’ll admit, I’ve often thought it would be wonderful to be a femme fatale. But then I’d always come back to thinking that if they only had what I’ve had – a family, real love, an anchor – they would have been so much happier during all the hours when the marquees and the floodlights are dark.

Whenever I see Eve Arden, I can’t help but grin. TV and classic film are all the better for her wry, well-timed delivery, and I look forward to experiencing more of her work in the future.

For more characters, please see Once Upon A Screen, Outspoken and Freckled, and Paula’s Cinema Club. Thanks for hosting, ladies–let’s do this again next year!

And with that, I think we’ve wrapped up 2017. Amazing, isn’t it? I’ve said it before, and I’ll say it again, thanks to my fellow bloggers and faithful readers for a great year, and I’m looking forward to what’s ahead in 2018. Gonna go vacay the heck out of the next couple of weeks, although I’ll still be reading and commenting around the blogosphere, and come January third, I will be back with another installment of Stage To Screen. Merry Christmas, happy Hanukkah, happy holidays if I’ve missed anything, and happy New Year, everybody! See you in 2018!

Ziegfeld Girl, Cover Girl, The Doughgirls, Mildred Pierce, Night and Day, and Our Miss Brooks are available on DVD from Amazon.