In Of Human Bondage, we saw Bette play a cruel, gold-digging vixen keeping a romantic young man in her clutches. Eight years later, the shoe was on the other foot when Bette took the role of Charlotte Vale, a woman controlled by her mother, in the 1942 film, Now Voyager. Not only is the movie an interesting character study about moving beyond the effects of parental abuse, but it shows the progress Bette made as an actress.

The film opens with a view of a solid-looking lawn jockey, with the word, “Vale” across the base. The rain is coming down in sheets, obscuring a showy mansion with columns like a Grecian temple. Inside, a severe-looking woman (Gladys Cooper) in Edwardian satin descends the stairs, wondering when her daughter-in-law and a man she’s bringing with her will arrive. As she sweeps through the foyer into the sitting room, it’s clear the whole house is formal and stiff like a vatermorder collar.

The daughter-in-law, whose name is Lisa (Ilka Chase), and her friend, Dr. Jaquith (Claude Rains), show up promptly, and Mrs. Vale looks at the doctor as if he’s a bedraggled stray cat. Lisa says she’s concerned about Charlotte’s secretiveness and crying jags, and simply wants Dr. Jaquith, a top psychiatrist, to evaluate her. Mrs. Vale doesn’t trust doctors, and she dismisses the idea of her daughter being sick, mentally or otherwise. “She’s no more ill than a molting canary,” Mrs. Vale says. Uh huh. Mrs. Vale’s denial is more than obvious, and she herself doesn’t let up rubbing her thumbs together in a neurotic fashion. Molting canaries, my foot.

Bette Davis is introduced gradually in Now, Voyager. The first things we see of her as Charlotte Vale are her hands, deliberately and slowly carving an ivory box, then stopping abruptly when called by the butler. A cigarette totters on a china saucer next to the box. The hands make sure to hide any evidence of smoking in the trash can before answering the door. Next, we see heavy, laced-up Oxford heels descending the stairs, and a chunky, hunched-over woman sidling into the drawing room, twisting and squeezing her hands. Everything else about her is heavy as well, from the fabric of her dress to her brows to the way she sags from her mother and niece, June (Bonita Granville), teasing and belittling her mercilessly. The poor thing can barely function, and is as skittish as a scared rabbit. The family doesn’t bother putting on company manners for Dr. Jaquith, either, and Charlotte runs upstairs. 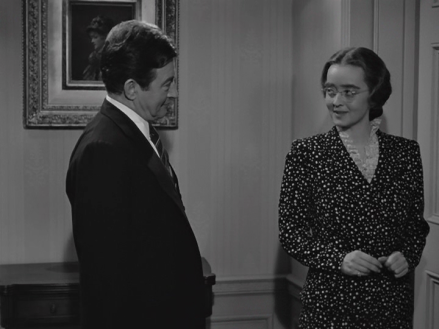 Charlotte agrees to show Dr. Jaquith her room, and she reveals a life hidden behind what her mother wants. Charlotte was a late child, and her mother has always discouraged her from making friends, from romantic relationships, and even from dieting or taking off her glasses. As a result, Charlotte quietly rebels. She locks her bedroom door from the outside. Not only does she smoke, but she reads books her mother doesn’t approve of, stashing them at the back of her bookshelf. In spite of her contraband activities, Charlotte is cracking under the strain of her mother’s oppression. While her mother is horrified at the idea of a Vale having a nervous breakdown, the die has been cast, and Dr. Jaquith recommends Charlotte come to his sanitarium, Cascades.

In the next scene we see Lisa pulling up in a town car to meet Dr. Jaquith at his sanitarium, which is lively and cheerful, and they go to see Charlotte. She’s lost weight, but still wearing the heavy dresses and glasses just as she did in Boston. Charlotte can now speak without trembling or her eyes darting around, but she continues to be very unsure of herself, and she definitely doesn’t want to go home. Fortunately for her, Lisa has cooked up a little scheme to delay that as long as possible, but before letting her in on it, Dr. Jaquith hands Charlotte a typed piece of paper with a verse by Walt Whitman:

Charlotte does just that, as Lisa’s scheme involves Charlotte taking a cruise around South America. The film cuts to a big group of cruise ship passengers waiting to go on a shore excursion, except that they’re short one person–the mysterious Miss Beauchamp. They’re all speculating about her because she’s spent the whole voyage in her cabin, and one woman remarks that Miss Beauchamp looks as if she’s been ill, and seems “pale, but interesting.” Everyone stops short when a pair of high-fashion pumps pause at the top of the gangplank, and then our Charlotte descends, looking completely transformed but tentative. Everyone breathes out and relaxes before absorbing Charlotte into the group.

Charlotte is asked to go ashore with a man who introduces himself as Mr. Jeremiah Durrance (Paul Henreid), but as he and Charlotte get more friendly over lunch, he tells her to call him Jerry. Jerry’s on his way to Rio de Janiero on business and is married with two daughters. Jerry’s so sympathetic that Charlotte tells him that she’s been in a sanitarium and a friend, Renee Beauchamp, let her take her spot on the cruise at the last minute. The two become quite a pair on the voyage, and Jerry introduces Charlotte to his longtime friends, Deb and Frank McIntyre (Lee Patrick and James Rennie). Deb tells Charlotte how Jerry’s wife plays the victim even though she was the one to hook Jerry. Since he’s a gentleman and because of their two daughters, Jerry stays in the relationship. 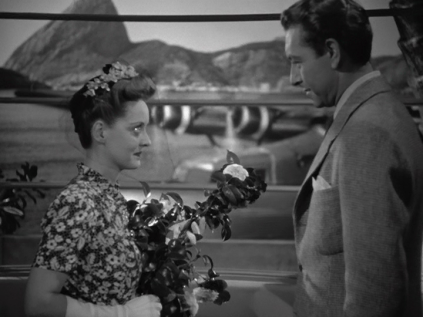 On a drive up Sugarloaf, Charlotte and Jerry have a mishap when their taxi driver accidentally strands them, and they have to spend the night in a shack, which means bundling to stay warm. Charlotte stays in Rio with Jerry while waiting for a plane to take her back to the cruise ship, and Jerry confesses he’s in love with her. Charlotte is resistant to the idea of an affair with a married man, but she finally relents, and five days later she goes to meet her ship, thinking she will never see Jerry again.

Back in the United States, Lisa is overjoyed to see how confident Charlotte has become. Instead of hiding in her cabin, she’s the most popular lady aboard the cruise ship. Likewise, the rest of Charlotte’s family are shocked and pleasantly surprised at the changes. They all realize there’s a new sheriff in town when Charlotte goes against what their mother wants, such as lighting a fire in a fireplace that’s never been lit before. An old friend of hers, Elliot (John Loder), is also there, and he asks if Charlotte will see him, which she readily accepts, and after a suitable period of time, they become engaged. 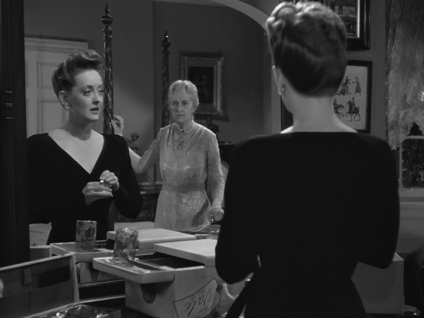 The only person who doesn’t take to the new Charlotte is, naturally, Mrs. Vale, who wants Charlotte under her thumb again. Charlotte disagrees, so Mrs. Vale tries to lay on the guilt. She either accidentally or on purpose falls down the stairs and sprains her ankle, but instead of crumbling, Charlotte delegates duties to a nurse named Dora (played by the wryly funny Mary Wickes). Mrs. Vale grudgingly accepts that Charlotte will no longer be cowed, and the two of them call a truce. Sorta.

Charlotte and Elliot go to dinner at a friend’s house before a group outing to a concert, and who should show up but Jerry. He and Charlotte pretend as if they’ve just met, but in whispers they catch up with each other. Charlotte realizes she’s just been pretending with Elliot, and they end up breaking their engagement. Unfortunately, right after this, Charlotte and her mother have a confrontation about the nature of their relationship, and Charlotte tells her, “I didn’t want to be born, and you didn’t want me. It’s been a calamity on both sides.” Mrs. Vale then dies from a heart attack, probably due to the sudden shock. Charlotte blames herself, even though her mother had been told it was only a matter of time before her heart finished her.

Alone again, Charlotte flees back to Cascade, thinking she’s going to collapse into another nervous breakdown. Life says, “Not so fast, Miss Vale,” and what happens next allows Charlotte to use her experiences to help someone else, bringing light and fun to places where only darkness and gloom had been. Jerry may figure into things as well. Or not. 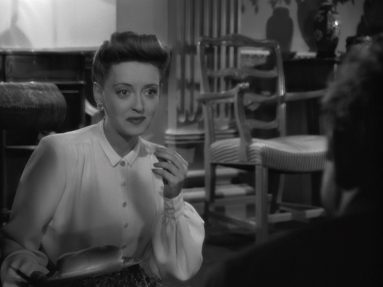 What I appreciate about Now, Voyager is Charlotte’s growth and development. Charlotte could easily continue to rebel against her mother just because she can, but it’s more of a case of her becoming a whole, complete woman. She learns to look outside herself and channel her energy into investing in other people. She also manages to keep her integrity instead of pursuing what may turn destructive, even if it was gone after for noble reasons. What’s interesting as well is that every time Charlotte makes progress as a person, the camera starts at her feet, pans upwards and Bette pauses just before she takes her first step, inviting viewers to symbolically move forward with her. Then as she helps other people to move forward, the camera follows them in a similar way.

Bette Davis’s performance in the film is excellent. In the eight years between Of Human Bondage and Now, Voyager she made a lot of leaps and bounds as an actress, keeping her emotions more subtle, as opposed to laying everything and everyone bare. Her Charlotte Vale becomes a strong, gutsy woman, both flawed and admirable, but always intriguing. Now, Voyager is a fine example of what makes Bette Davis an important part of film history.

And there we have my Day Two of the Bette Davis Blogathon. In the Good Old Days of Classic Hollywood has plenty more Bette for anyone who’s so inclined. Thanks for reading, and see you tomorrow for Day Three!

8 thoughts on “Sailing Forth”